SnakeEyesOnAPlane said:
Bill, you have incredible talent. The closest I've come to anything like that has been with Lego...
Click to expand...

Thanks SnakeEyes, but the word talent bears the connotation of some kind of inherent gift . While a naturally good eye/hand coordination may be a good starting point, it is only that. Remember these skills are learned, practiced, and improved when one builds a lot of stuff, and strives to do a little better each time. Dr. Tom can attest I wasn't any where near this good 23 years ago when we started our association. What makes the biggest difference is patience; breaking the seemingly hard job down into smaller easier sub assembalies. I have figured out some tricks, but was taught most of the others by modelers who were more skilled than I was. That is why I like to show these big projects step by step, to help encourage others to break the jobs down into smaller pieces, and take more time to get each step right. 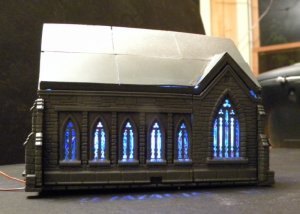 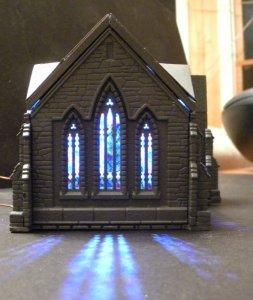 I'm playing with the lighting. The photos are unsatisfactory, the windows look better in person. the flash overpowers the interior lighting totally. and in the longer exposures needed without the flash the windows closest to the LED's get washed out.


as you can there isn't much light leak. what there is is exaggerated in the long exposures.

Bill,
Seeing this nice model "in person" yesterday at the RR club was a real treat. The stained glass windows have turned out beautifully. The LED lights are working out very well too.
Doc Tom:thumb:

With the wires in, My next part of this project is to finish the exterior roof, and ,make an attempt on the rest of the bell tower. The Tower will be a real challenge, since I'm not really fixed on what it should look like. That is usually not my problem, so I'm just going to have to build, and see if I am satisfied with what shows up.

I have a removable cap on the top of the tower, so I can build a steeple to fit that cap, even if the church itself is not there, and still be insured of a good fit, so I can start to do some site work toward fitting the St. Stephan's into Downtown Harlow, and wire it into the growing lighted building circuit on my RR. That circuit is powered off of one of the transformers that power a throttle, so the lights go on when the power strip that serves as an on and off switch for the throttles is on.

Eventually I will have to build pews, a lectern, a pulpit, an alter, an organ. plauges for the walls ect, but that will wait until I have fewer projects on the bench. I just figured out what I need the most; and that is a very small electric clock that chimes the hour, preferably with a Westminster chime. Were I able to get my greedy paws on such a thing (should one exist), I could bust the case, get the speaker out, and mount it with extension wires, in the bell tower, while the clock face itself was mouted in the fascia nearby.

In any case it will be fun to get this structure into downtown Clarksville. Once it is in place , the log camps and Murray ( which has no structures, being just a passing siding , will be the only communities without a house of worship. perhaps I need to make some specially outfitted skid shacks to serve a places of worship for the camps.

Sadly as an American, I speak only a strange variant of English. I can puzzle my way through some written Spanish , if I have some reference materials. My brain doen't operate fast enough for spoken Spanish. If I were born in Mexico I'd probably be mute.

very nice, especially the lighting and look into the interior.
Greetings Otto

Good job recognizing the Dutch, and thinking to use tools at hand Trainiac.


The church has just sat, with the exception of some minor sanding on the exterior roof pieces. The completion of the company store for the Sawmill/coal mine complex at our local club was inspiration enough for me to start a massive kitbash of the Company store / office building for the J. E. Patterson Coal and Lumber Co.


This build is documented on page 14 of the thread thread that Dr. Tom and I are running on our efforts at our Clarksville Tn. train club.


I'm at a holding place on the store until I test fit it on site, so it is possible I will go back to wirk on the church, and equally possible I will either pick up one of my many other irons from the fire, or start a completely different project. The weather report suggests that it will be too wet to mow for the next three or four days . 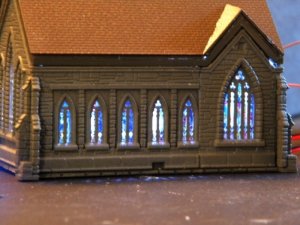 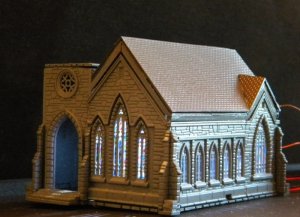 I have an exterior roof made for the church, and have made some progress toward getting a better photo of the stained glass effect
Last edited: Aug 17, 2014

Looks great! The lighting is great! I wonder how an n scale church would look with stained glass?

I'm sure it could be done, there would be some things that would be trickier. Led's might be way to overpowering in N scale. perhaps that could be minimized by putting the led under the layout and using fiberoptics to light the building. One could even use incandescents, but they will be forever burning out if they are on much,


I actually have an N scale church on my layout, way up near the ceiling on Sander's ridge. I will have to study it (it is one of the little touches that escape most folks notice). most likely though all that shows above the tree line is the steeple. 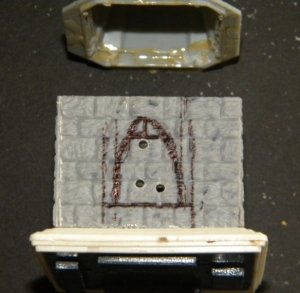 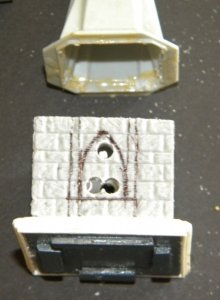 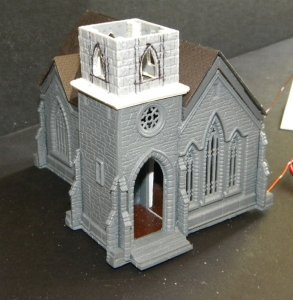 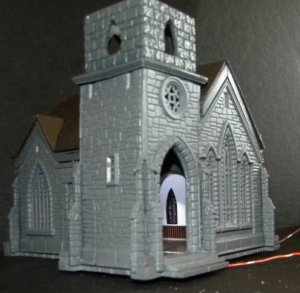 I have done some work on the bottom half of the bell tower extension. the stone is leftover from a Faller viaduct leg extension, the rest of it will show up on my narrow gauge, and at the planned spectacular Straka Gap bridge @ the club.

This piece of the bell tower extension needs a shot of dull coat after the paint is thoroughly dry . The arched window openings might get some kind of trim, possibly louvers, this section is removeable from the bottom of the tower, as will be the next section so the pieces will be easy to mess with on the work bench 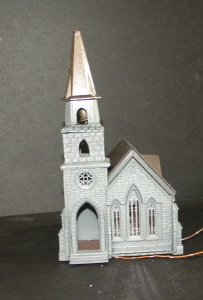 I built the easiest of the bell tower options. it is removable, so I can try the others later if I feel like it. I'm not fully satisfied with this, but if I ad liked of the other two ideas better I'd have built them. it is removable I can look at it for a while, and if I think of something better I can build it.


In any case, there is a lot to do, the front door, it needs some ivy, and there is a bunch of interior detail that might find it's way in there eventually; but next I think I will work on getting it on to it's site on the RR, hook up the lights, work on the foundation some, and study it for a while in site, to see how it looks in Downtown Harlow
Last edited: Aug 17, 2014

One of these days I'd like to model my own church. The footprint is kind of like your church, but it is all wood siding no stones. Your looks great! 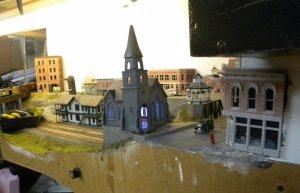 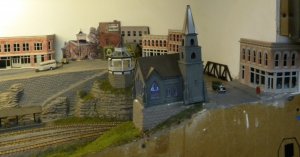 
Then I was done, My RR is in an attic, and I don't have the AC up there on yet.


The big black thing above the corner building in the middle photo is the bottom of the centralized control panel.

My other iron in the fire right now is the company store for the coal and lumber co at the Club, where I am begging to scratchbuild the roof.
Last edited: Aug 17, 2014

This is an impressive bit of modeling. I like the site you selected. The whole effect is to make you look up and that's one of the things churches do best.......look up to the heavens.

Very inviting front entranceway from the street also. Good placement of the model at the front allows for folks to peer inside at the great detail.

Now lets get those wild loggers into this house of worship.

Now lets get those wild loggers into this house of worship.

The Loggers, excepting those from the Murray camp, down on the Valley Division are much more likely to worship @ the big church, as yet unnamed, in Crooked Creek (am looking for the patron saint of loggers, and haven't found it yet.) ; or at the church up in Ridgemont, the one in Wildwood, the one up in Gegokayoosa, or possibly St. Joseph's in the Gizzard.

St Elgias' ST. Elgias is the patron saint of metal workers,) down at Montgomery Furnace , is filled up with Iron workers , and the wood hicks tend to stay away; brotherly love ony gets you so far after all.

I recon at St Steven's You'd likely see mostly city folk, and some of the Valley division train men, half or more of whom would be based out of Harlow Tn. Of course those that work the Mountain Division probably need to attend services twice daily, that being much more dangerous work.


I need to build more churches!

This is an impressive bit of modeling. I like the site you selected. The whole effect is to make you look up and that's one of the things churches do best.......look up to the heavens.

Now down in Harlow, the last thing we want is someone looking up. Harlow is the second oldest piece of my railroad, and directly above it is the Gizzard. the oldest section of my railroad.

I built the Gizzard close to thirty years ago, before I had learned to bite the bullet and buy good lumber for benchwork. The gizzard's bench work, designed to be portable is very strongly built, while being somewhat light weight, closely resembles the scrap pile that the lumber came from. the wiring looks even worse.

So if you are at St. Steven's, and are inspired, please look at your feet (the floor is pretty bad too ,but no where near as bad as the underside of the Gizzard) and recite the prayer of humble access. 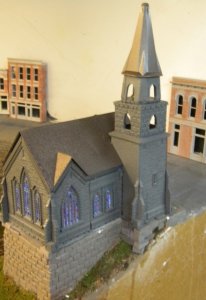 The bell tower was hanging in the air. I had some viynal material that was from some auto part packaging that I cut into stones for the foundation under the steeple. The material was gray to start with. I will paint it later to get it to blend with the plaster foundation.

Bill Nelson said:
(am looking for the patron saint of loggers, and haven't found it yet.) ; !
Click to expand...