Show us your layout, or anybody you knows layout, or your club layout.

I stayed here a few years and moved back to Bergen Point Here are some photos from the first layout there.

Well I got a new rug in my train room and have my train bench work done. It won't be long till some track gets done.

Wow, that really is awesome. One could easily spend hours down there.

*I never did a layout where the two sides of the table would have separate divided scenes. This is a first for me though it is a common feature in a lot of layouts. The main table section is 4' 6" X 8'. There will be a 2 track mainline. There will only be one tunnel through the hill and that being on the far end seen in the photo in this post. The near end seen in the photo I posted above, will have the two track main line curving and running around and under a slight overhanging cliff. I can see it in my mind and I hope I can make it look good.

Here it is today with two main lines and track cuts on far end for tunnel and on near end for overhanging rock formation.
Reactions: Revell-Fan, zathros and Cybergrinder

That's a great area to go and be.

A repaired Victorian mansion still needs some touch up painting.
.

The wood work is done that provides for a solid mountain top.
frank

From my old central peninsula,

From a different angle

The middle deck in the city

To the sawmill town

Th the new big log transfer off the narrow gauge

To the water powered sawmill

Those are great layout photos. You certainly got mountain building down. Now if I only can do half as good.

Here is my layout still under construction.
frank 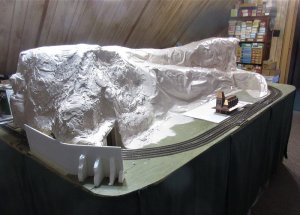 most of my recent photos don't show, as they were too large, or had been taken by my phone.; so I'm posting a batch here. Biscuit rock in the the Gizzard, on the top level of my central peninsula. 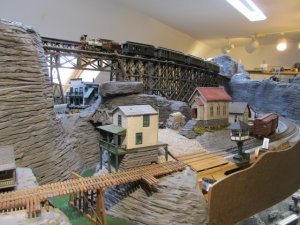 Directly below Biscuit Rock is The Harlow Union Station, where my DG CC & W RR shares the station with The Southern Railway. 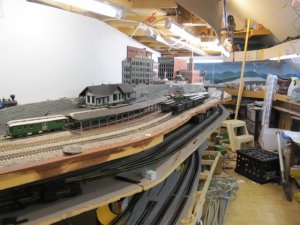 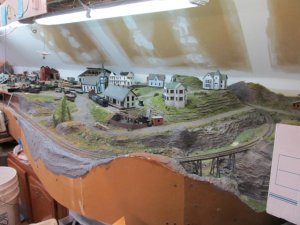 sharing the upper deck on the central peninsula is the log reload off the narrow gauge at Eagle Rock. that massive trestle carries the narrow gauge logging spur to Eagle Rock. one of my Surry Parker log loaders, the building of which is documented in the logging mining and industrial RR section, on the show me your unique logging equipment thread. 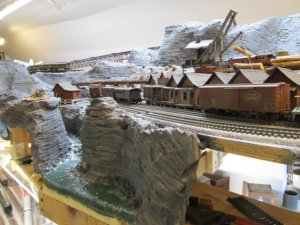 The courthouse in Downtown Harlow. the hose drying tower on the fire station disguises a piece of all thread that helps steady the upper deck on its perch on the 2x4 stud wall that hols the central backdrop on the lower levels 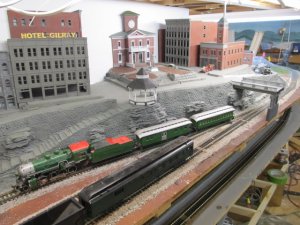 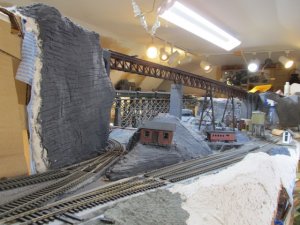 St Christopher's in Harlow is next to an opening in the backdrop in Harlow, that lets the Southern Mainline fold in on itself to make a return loop, before going down the helox a round to Southern Staging. Southern Staging has a return loop as well, so Southern Northbound and Southbound trains should be able to come and go through the middle of my layout. 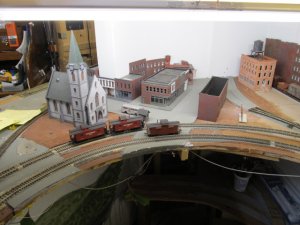 Here three levels are almost visible under the construction debris. on the upper far left the narrow gauge starts climbing up the sloped ceiling on a shelf making a fourth level, carrying the narrow gauge to the level of those awesome big bridges. 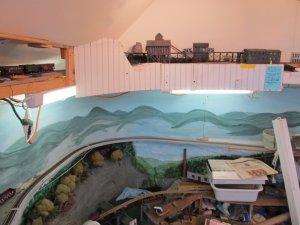 also buried in the construction debris, you can see four levels, the upper level being the narrow gauge main coming off the high end of that huge steel bridge . the area on this walk under and upper corner will be Sander's ridge, an area with iron and coal mines. 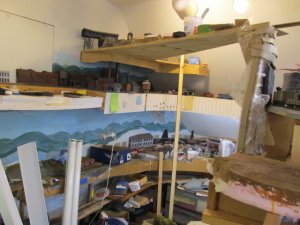 and at the end of the line , there is Gegokayoosa NC, and another iron mine, just above the State Ling Ga. staging yard, and narrow gauge return loop. there is a return loop in Gegokayoosa as well, also on a walk under at the entry to the attic room. If you are more than six foot two, it would be a duck under. 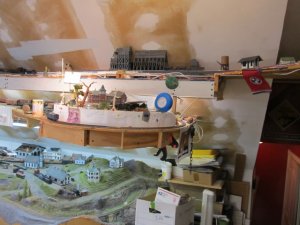 I have been making very slow progress, I We can stay in this house for a while after retirement, I might be able to get somewhere, otherwise, I will have been to ambitious starting this monstrosity.
Reactions: Cybergrinder

Toptrain, if your having problems uploading pictures let me help you, please. All you have to do is select "Attach" files on the bottom left of the windows message pane, and navigate to the picture you want to upload, once uploaed, you can select full size or thumbnail, you choice. If you have any problems with, please let me know. I love looingat your work and craftsmanship.

Bill, the photo below you posted reminds me of so many older towns I have driven through, well done!!

zathros said:
Toptrain, if your having problems uploading pictures let me help you, please. All you have to do is select "Attach" files on the bottom left of the windows message pane, and navigate to the picture you want to upload, once uploaed, you can select full size or thumbnail, you choice. If you have any problems with, please let me know. I love looingat your work and craftsmanship.
Click to expand...

I had troubles uploading photos, and most of my recent photos are gone. the new platform has a smaller file size limit. photos off my I phone won't load, nor will full size photos from my camera .

going into my cameras settings, I had to set it to small file size, and then the photos I take will load. as it stands I've lost a coupe years documentation several threads, Isn't technology wonderful

Load photos from yuour PC. The problem is with your (most) phones, and their picture managers, and upload limits. Loading off of your PC will bypass these kind of errors.

I used to be able to load large images off my camera , through my PC. they won't load now, have to select small image size on my camera. the recent platform change restricted file size considerably

Bill Nelson said:
I used to be able to load large images off my camera , through my PC. they won't load now, have to select small image size on my camera. the recent platform change restricted file size considerably
Click to expand...

It wasn't the platform change, it was the actual cost of storage memory upgrades. This forum costs real money to maintain, and our benefactor, Darius, pays for it all. Limiting the size of the photos was the only way to keep the cost of storage under control. I take my photos on either my Note 9, or my Nikon Coolpix L27 and put them on my computer, then in Paint I just resize the pictures by reducing the largest pixel count to 1000 pixels. This maintains the original resolution, but makes a smaller picture and a smaller file size.
You must log in or register to reply here.
Share:
Facebook Twitter Reddit Pinterest Tumblr WhatsApp Email Link
Top Bottom