Show us your layout, or anybody you knows layout, or your club layout. 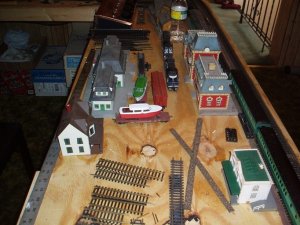 * I'll start of with a photo of my layout at a very difficult time. "The Little People Revolution". Yes they are there! Sometimes everywhere! If not hiding in buildings and under trees, inside of tunnels and caves! These sneaky little buggers sole purpose is to get even with layout operators who always are knocking them over. Dropping them on the floor and stepping on them. Chopping off there arms and legs to change there position. And making then drive foreign cars they don't want to. There are a lot more complaints but ahh I am to lazy to post them here. And that is probably one of there complaints, because they complain about everything. Back away's in time,they were secretly conspiring to halt my use of the layout, with a building boom, aimed at blocking all operation on the layout. It was a very difficult time foe me.
* Well it starts out harmless enough with a car place here or there that you just cant remember putting there.
Last edited: Jul 12, 2018
Reactions: zathros

Now to see that photo you would think it is just a layout being built and the necessary things put here and there till something gets done. This didn't happen ! I didn't know what was going on until this happened.
* A complete row of building appeared . Some HO, and some N gauge all together, in line. Wooo what is happening I thought. So I removed the buildings and this happened. 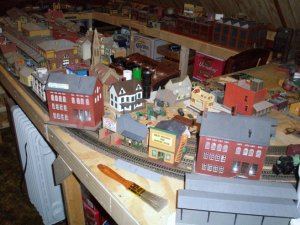 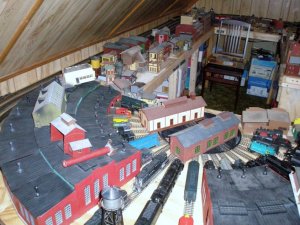 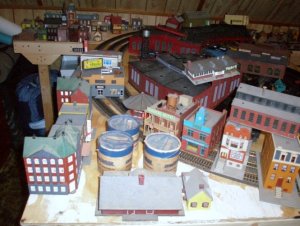 They built buildings on the main lines and in the streets. They put engine houses on the turntable. They, they, they, they ! This is very hard on me, when I think back. I would clear them, they would build more.
* Woo is me.
frank
Reactions: zathros

wWell it took a town meeting to straighten this all out. Now I am more careful, and deliberate, in my building. I attend town meetings and apply for all my building permits as they required me to. And I don't chop off any legs or arms unless that little person decides that the new location will be OK !
Last edited: Mar 29, 2018

Oh I did like their downtown arrangement of building and did keep them arranged like that, for a while.
frank 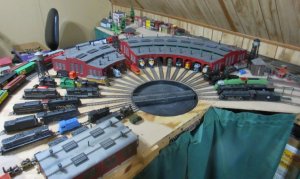 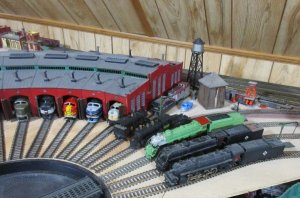 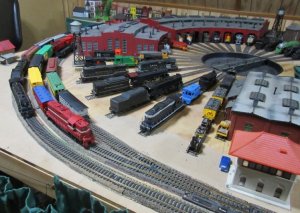 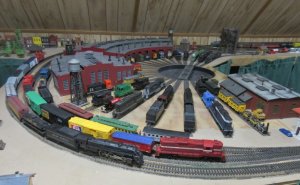 A look today at the layout with some Mantua Mikado's and a few Pacifics. 3 small Marx Hustler's, a couple of Revell Sw7's, 6 EMD F3's and 7's a shark nose and others.
Last edited: Mar 29, 2018
Reactions: zathros

EXCELLENT, THIS THREAD IS NOW A STICKY!!
Reactions: toptrain1

I was at my son Stephen house a month or so ago and took some photos of my son Steves layout. It just gets more impressive each time I see it. 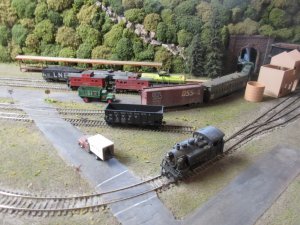 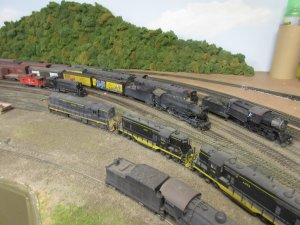 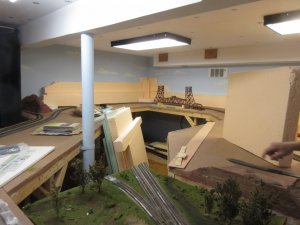 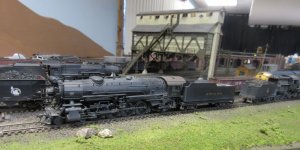 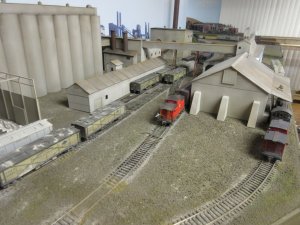 Edit; 12-22-2017 This photo shows a Harriman 2-8-0, this is my son steve's loco on his layout. A special locomotive because of the kitbashing done to this locomotive, by Steve. The fire box has been changed to a Wooten style one. To do this the cab had to notched to fit around the much wider firebox. 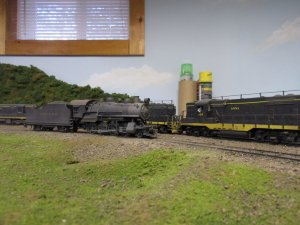 Here are a few more photos.
Again a photo was taken on Steve's layout. Another kitbashed locomotive that was done by Steve. This one is a Lehigh New England Mikado. The L&E purchased steam power from the Pennsylvania Railroad when the need arrived. This loco came to the L&E as a stock PRR L1 class 2-8-2. Details had to be changed and the walkways reconstructed to match this model loco to when in was outshopped by the L&E after its reworking in preparation to the L&R using this locomotive. The patches on the tender sides were done during this rebuilding. The chains on the tender were a necessity. These were used when spotting and removing freight cars from parallel sidings. 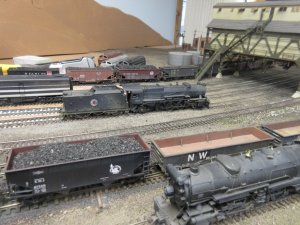 In this photo taken on steves layout, two Alco RS-1 locomotives are slowly approaching the points of the turntable access switch. They will be running into this sidetrack to clear the main line.
. 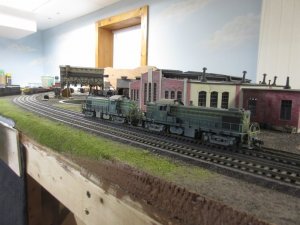 This photo shows CNJ Ki class 4-8-0 camelback #454 waiting for a clear track. This locomotive is one that the body was scratch-built to fit a Mantua 4-8-0 drive. The tender is a kit originally made by Sparro Point.
This locomotive wasn't kitbashed. The entire body was scratch-built. The drive is from a TYCO MANTUA 4-8-0 old timer. It just so happens that this drive has the correct size drivers and the spacing is correct for this particular locomotive 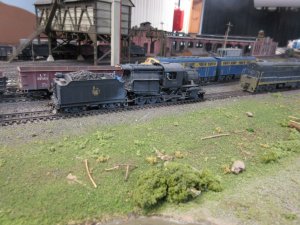 This last photo is a Lehigh and New England Alco Fa1, FB1, FB1 that has been custom Painted by Steve. 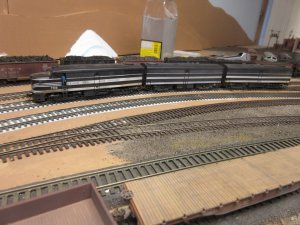 Thank you, that was a quick one just to add photo of new loco to my photo records

Well, I am back again. I just put my CNJ steam on the layout again. It will seem to be a jumble of stored locomotives. My explanation for this is, I put most of a certain roads locomotives on the Roundhouse end and start cleaning, lubing and checking the operation of each one of. After which a few get put back in their boxes on a shelf. Then I get to play with my trains. You uploader say I am allowed 10,8 MB in size. You didn't accept a less than 325 kilobyte photo. That is 32 times smaller than what you say you allow. You keep saying it is too large. And you keep saying that the file size is 10.8megabytes. I am bewildered.
frank

Looks like you got the Photobucket Blues too. I found Imgur to be a nice/better replacement for photos and no problems linking to Zealot. Hope this helps.
Doc Tom

11-15-2017 layout Arrival of a photographic car for the lines official photographer. Mayem at the celebration 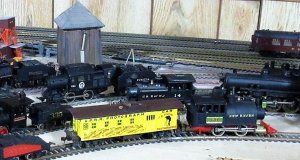 Posts without pictures will be deleted. Also, the forum rules say you must upload the pictures to Zealot. Our generous uploading, 10 pics per post, as many posts as you need, will mean your pictures will not disappear, and we don't charge. If you could upload your pictures that would be great. If they disappear, the thread will be deleted, which would really suck, but a thread of paragraphs on a forum like this doesn't cut the mustard. Thanks.

That must be a blast to run. That turntable and all those trains to manage makes me think of " The Addam's Family", and the way he always caused head on collisions, "Oh the model Humanity". 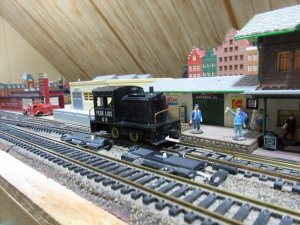 Here a 0-4-0 teakettle #80 I painted and lettered for the Reading Railroad with its old Bobber caboose #102. The loco is a very old one sold by Silvine. This company made sectional track and power packs for HO trains. This is one of three different Locomotives I have that were sold by Silvine.
frank 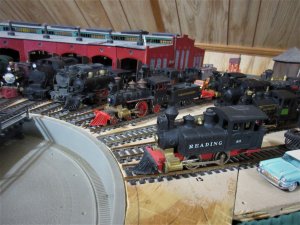 Toptrain, that overhead view of the turntable is awesome. All these pics are awesome. I wish I had a much bigger house than the shoe box I live in now!!

* With my CNJ I5 taking a nose dive off of the layout and damaging the cab, my I4 remains as the available one of that pair. I liked double-heading the pair. Here is the I4 about to enter the turntable.
frankView attachment 162507 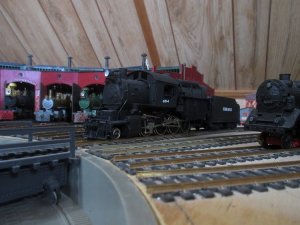 My last photo of my layout taken from a blimp has been almost a month ago. Maybe you'de like to see it.
frank 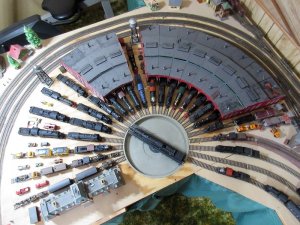