I was cleaning up and organizing my train stuff, and I found a new motor that is just a tad smaller than the original motor. You want the biggest possible motor that will fit. bigger motors tend to be more powerful, and have beter slow speeds. this motor has very slow starting speed, and what looks like a very appropriate top speed. the gearing on this model is super smooth. I have cheated a ground wire from the articulated frame to the frame at the rear of the locomotive. I'm looking at adding electrical pick up on the insulated side of the drivers, but there isn't much room down there, so I may wait and see how well it runs. I cut off the brass coupler housing, as a first step to mounting a KD on this locomotive. I'm studying it to come up with a plan to paint this. I don't think basic black will work. it needs a Russian iron boiler, lots of bright work, a varnished wood cab, and perhaps a dark red color like the Baldwin Lake color that was popular. I'm going to have to learn some new painting methods. this locomotive can be a Guinea pig for painting my On3 4-4-0s . the black rubber flexible coupling on the shaft was not so flexible after 35 years. PFM had included a replacement, but it had petrified as well. I was able to use a piece of tubing from a pediatric central line on the shaft wide enough to fit a larger piece of tubing which I believe was for a nebulizer. it is super flexable, and allows great movement of the shaft, so the articulated frame can move very freely. 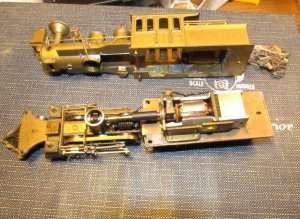 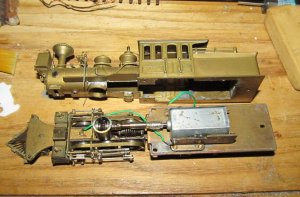 I aquired another Hon3 engine, before I got the last one modified and painted, so I'm getting behind. The new (old) locomotive is a nicely painted PFM / United C&S 2-6-0. this is an early model, and was tender drive. the motor ddid not work, but likely I would have remotored it anyway. I removed the straight stack with the bear trap cinder catcher . PSC makes two different Radley Hunter smoke stacks, and I hope to get one of those for this critter. in the mean time, I have a Bachman stack from a On30 Porter 0-4-0, which I can shorten, and make a credible stack till I can get my hands on a Radley Hunter stack.


I have cut a blank of heavy brass stock, which is a tolerance fit in the motor hole in the tender. I'll use JB Quick to glue the brass bar crossways in the motor opening, which will give me a base to mount this tiny gear head motor from Microlocomotion.com the motor is has a 4:1 gear ration, which will give this locomotive awesome slow speed capability, and it's top speed will be reasonable. the locomotive will be a little loud, at top speed, but that is a worthwhile trade off good slow speed operation in my book. this is going to be fun.


Both locomotives will need some extra electrical pick up on thier insulated side, and both need HOn3 KDs installed, which is going to be a bear. painting the Mason Bogie will be a bear, as it is so fancy it really deserves a fancy paint job. The 2-6-0 needs a green cab with a red roof, and a #2 pencil graphite job on it's smoke box. this is going to be fun! 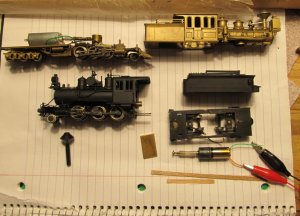 started painting on the body of the Mason Bogie today

Did the tank, stack , and headlight in basic satin black. Will do the boiler in an attempt to match Russian iron.

This is where It is right now. This could work pretty well, or be horrible. We will see.

Making progress on the Mason Bogie. Need to get its electrical path sorted out, and do a little touch up work, as well as numbers and letters.

Don't even know this ones number, but I think it belongs on the varnish.

Had to clean my workbench off before the Grandchildren visited for the Ecilipse I got couplers on the Bogie as well,and it just needs letters and numbers, and a shot of gloss.

On the C & S 2-6-0, I had to unsolder the brass casting of the draft gear box. Mark the line where the coupler box would go, and then grind a slot in the brass tender end beam with a grinder in a dremil.

i moved the truck out of the way while grinding. The slot was not quite flush with the bottom of the tender frame, so I cut a styrene shim, before placing an HOn3 coupler. And marking the screw location

Then I drilled a hole slightly smaller than the self tapping screw KD thoughtfully provides wit HOn3 couplers, and used the screw to mount the coupler.

The coupler is a pretty good fit.
Reactions: zathros

here is a link to the Mason Bogie on the work bench after replacing the motor for as second time, the first motor was too fast, and had poor slow speed control. this one is to fast, but has excellent slow speed control.
Reactions: Figuer

Anything that can be photographed so much bigger than life and look so good is fantastic. Wow!! These Locos are superb!! I am amazed how well that runs at low speeds. Those brushes could get hot though. I am sure you have it set up right by looking at the video, so smooth. What kind of electric motors are these?

These are gear reduction motors I got from Eldon; at Microlocomotion.com.

Sadly Eldon has passed away. He found surplus motors of various types.