As in previous years, this year I will try to glue another micro diorama in a walnut. The competition was organized by minimodel.cz, but in recent years it has not been announced.
I will try to continue. The essence of this competition was to glue a model of any technique and place it in a walnut shell so that it could be completely closed. I stayed with the military theme, but this time I will try to process something from the Eastern Front. So it will be a clash of German and Russian technology, I'll see what happens ... 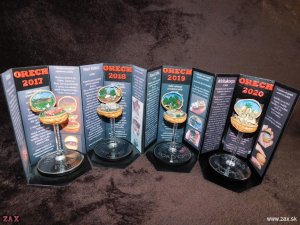 The Farm (1:150) Model glued in competition Walnut 2017, which organizes minimodel.cz The essence of this competition is to glue the model to any technique and place it into the shell of walnut so that you can completely close. I glued model Skoda Favorit Pick-Up (with interior). In this...

So after a year I have next micro diorama in the walnut. (The first diorama was the Farm) Model glued in competition Walnut 2018, which organizes minimodel.cz The essence of this competition is to glue the model to any technique and place it into the shell of walnut so that you can completely...

First I managed to glue Sd.Kfz. 222 Ausf. B from R&P Models. The original is at 1:87, I reduced it to 1: 200, it has more than 100 parts, which was no longer very pastable for me at 1: 200, so I simplified where possible, but it's still for me on the edge of stickability...
Just like last year for walnut, I prepared a stem from the cup, I will still glue the base as in previous years. 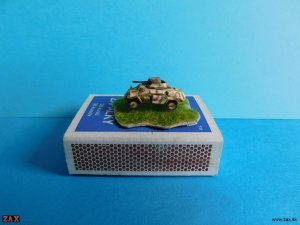 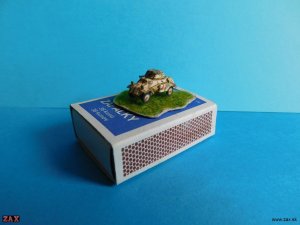 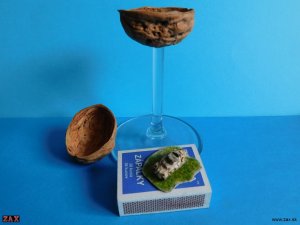 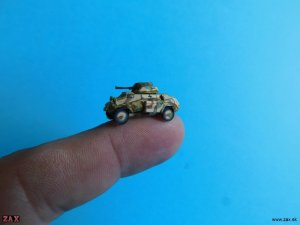 Nice way to try to keep an old challenge alive.

WWII in a nutshell. Cool idea!

I've seen these built, but never have seen them sold already built. They would make great gifts. Go Coconut, and you could make a whole battle scene!!
Last edited: Jun 21, 2021

I proceed slowly ... I glued and sprayed the pedestal, carved and sprayed the inscription and added hinges on walnut. So far, I still have it detachable, because now I'm going to do it separately with each half of the shell.: 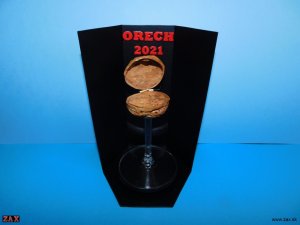 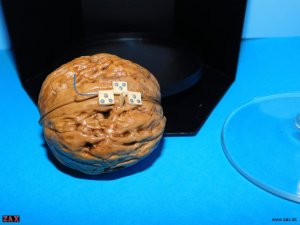 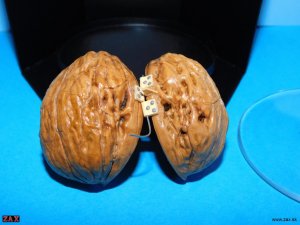 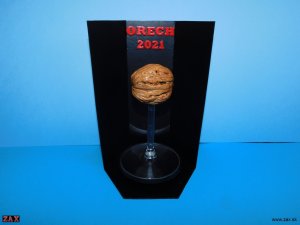 I glued the opponent for Sd.Kfz. 222. Finding some Russian equipment in a minibox scale is not like that simple... but I managed to find a T-34 from Rawen in 1: 100. So I reduced it to 1: 200. I had to shorten it to fit in the walnut, the back side (actually the whole tank) will be hidden in the vegetation, so it will not matter ... 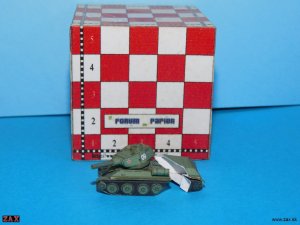 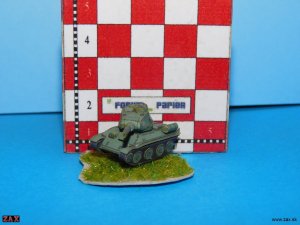 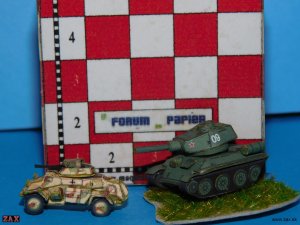 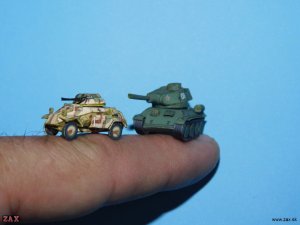 WOW! Those vehicles are tiny! I have to say that I always enjoy seeing your work!

Tiny and yet so detailed.

I found some free space in the walnut, so I glued the Zundap KS750 motorcycle from R&P Models.This is a bit extreme because the original is at 1:87 and after reducing to 1: 200 it was quite small ...When I took the photo, I stuck it on my nail, because if I sneezed I probably wouldn't find it anymore ... 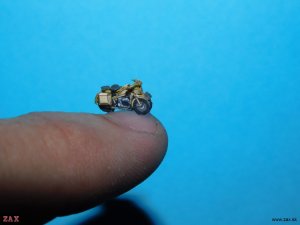 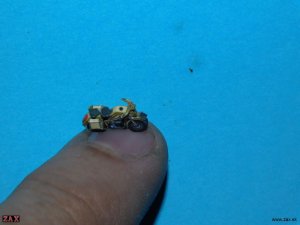 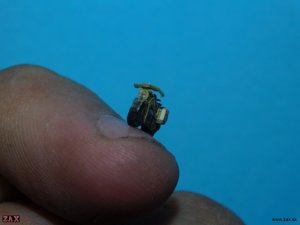 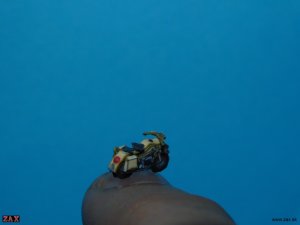 Thanks, I made the terrain in the lower shell. Here I place a transporter (on the road) and a motorcycle (to the left of the lake) ... 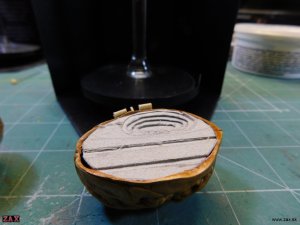 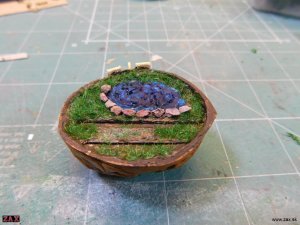 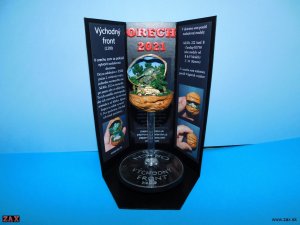 So I'm done. I'm glad that I managed to finish it this year as well, even though it's a bit of a burden, especially for the eyes. Let me just summarize, the competition was originally organized by minimodel.cz, it was not announced in 2020 and it has probably already ended definitively. I keep going.
The essence of this competition was to glue a model of any technique and place it in a walnut shell so that it could be completely closed. I stayed with the military theme, this time I finally got to the Eastern Front.The whole nut is about compromises, what can still be done and especially how to do it so that it can be closed, so it must be taken that way ...

In the nut I tried to create the following diorama:
The story takes place in the USSR during World War II, a unit of the Wehrmacht at Sd.Kfz. 222 stopped by the lake to rest. Here they were caught by a motorcycle to warn them that the Red Army was close. He suddenly emerged from behind the hill T-34 with an infantry, which sealed their fate ...
I will mention a few details:
-I gave something to almost all the soldiers, so the motorcycle clutch has a message, the soldier next to the transporter smokes, the Russian soldiers have weapons (although I could have made them even smaller ...), the soldier behind the transporter, I put a tree there, with which I originally he didn't count, but he came in exactly that place ...
-The tank has a rotating tower, so if I close it it has to aim in front
-in the upper shell there is a spring from which water flows into the lake in the lower shell, I created a stream of water from a fiber that is used in a light fountain. In order to close it, it is glued at the top and it slides into the hole in the lake at the bottom.

Just like in previous years, I glued the walnut to the stem of a cup with an engraved name ... Also, this walnut got a base, where there is some talk and photo. 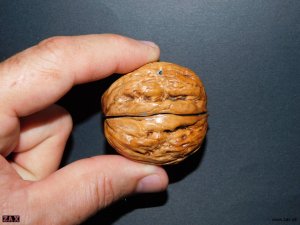 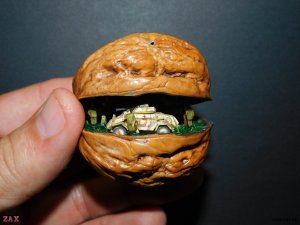 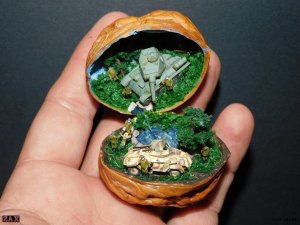 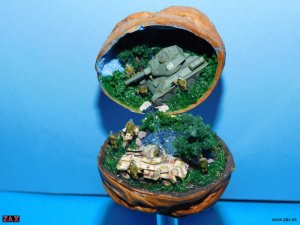 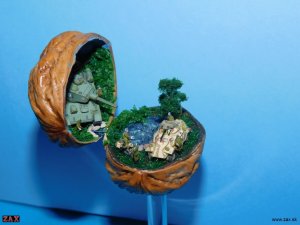 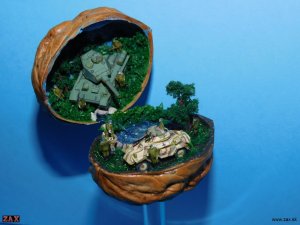 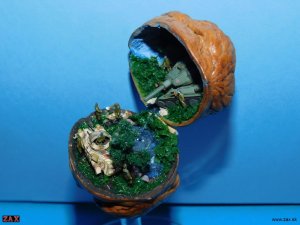 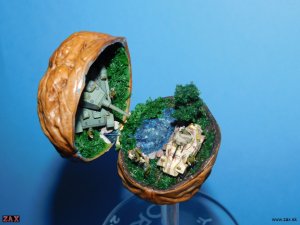 ... one more common photo of all the nuts: 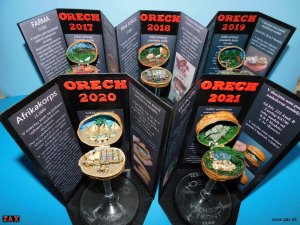 ... and finally a presentation video as with other nuts, where there are more photos:

Your work on these things is mind blowing!!!
KUDOS TO YOU ON ANOTHER FINE JOB WELL DONE!!!

Thank you, I'm glad I kind of glued it to this year as well, and now I'm thinking about what I could put in the nut next year
Reactions: Revell-Fan, zathros and Rhaven Blaack

This is one of the most stunning pieces I have ever seen. Great work, Mike, and thank you very much for sharing it with us!!! :Bravo: :Bravo: :Bravo:
Reactions: zathros

Those vehicles deserve build individual build threads. Reminds me of the "Forbidden Stitch" from China, that women used to do, but if they did too much, they would go blind. Really amazing!!

I showed the video to my mom. She is absolutely amazed at your ideas and skills! She sends you her best regards and asks you to continue creating these little masterpieces.