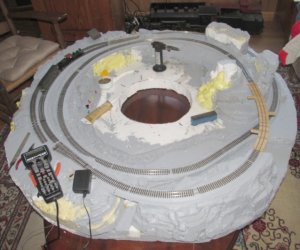 I dusted this off, and set it up to work on the passing siding. I still need to wire in the last section of track the switches are wired with separate powered frogs, so the inside rails past the frog need to be jumpered from somewhere. since most of my HOn3 locomotives are DC, I will probably jumper the rails off of the frog wires, so DC locomotives can be parked on the passing sidings . The last time I had this out, the Blackstone C-19 couldn't pull the combine up the inside hill, but it did so easily today.
Last edited: Aug 16, 2014
Reactions: micahrogers and zathros

The "mini" is coming along nicely. I am glad the lokie could pull the grade.

Are you headin' for a Christmas finish????

I like that you can put your Christmas tree in the center......cool.

I'd like to have it operable by Christmas, finished would be a different mater completely.

I got the hole in the layout cut out for the Christmas tree stand, still need to add wires to the switch rails past the frog, and tie them into the frog wires, so the circle will be powered all the way round.
Last edited: Aug 16, 2014
Reactions: zathros

That is very nice. Maybe you could post some pics when you get the tree up??

the circle is operable, and the tree is going up

I got home from work this morning at about 7:15 I got some wire and fabricated up the pieces I needed to add to power to the passing siding tracks. there is still a small section of track missing on the outside track, but with both tracks powered, the inside track completes the double loop, and I can run trains!


After I got the track working #1 son Forrester, home from graduate school; started to assemble the tree. While I was working with the wires, he told me how he ****ed at soldering; and I taught him the secrets of using flux, and tinning the surfaces before hand.


I have had trains under the Christmas tree many times in the last 57 years. this is the fanciest yet, and I have just started.

I'll post another photo when the tree is decorated. we are going to go light on decorations, as we are all tired and lazy

Back home from work at about 7:45 Sunday morning I did some dishes, and then put the lights and tinsel on the tree, which may be all the decorations it gets this year. I plugged up the little NCE DCC power cab, and now the little consolidation has much better speed control and I can ring the bell , blow the whistle, and make it hiss.

I'm going to have to make more hollow scenery to hide the Christmas tree stand better. If you look out the window you can see the trestle approach for the old L&N Memphis line's Cumberland River Bridge

When I started thinking about a portable, I was thinking about making a sectional On3 layout. My On3 shay takes a 19 inch radius as an absolute minimum, and will only do that when the steam engine is on the outside. MY ON30 climax I intend to spread to ON3 will do 18 inch radius.


the plan I kept gravitating to would have used four three foot squares to make a six foot by six foot layout. all but two of my Hon3 locomotives will do a 16 inch radius, and I thought Making the smaller layout would get me in less trouble with the local authorities, who are highly doubtful of any need for a small layout when my 14 foot by 22 foot attic is full to the gills with trains. Mainly I was wanting something portable to show off, and wanted to experiment with foam scenery.


You do a lot of planning with your fine model buildings, If you put that kind of planning to work on a layout, You'll get good results. With 10 x 5 you can layout kraft paper, and plot the track plan full size to avoid surprises.


When I do track planning for a specific place I start by drawing a scale drawing of the room on graph paper; make a lot of copies, and then experiment with bench-work shapes when I have a shape I like I make copies of the bench work plan I like, and then use drafting tools to experiment with possible track plans. I take a lot of time with it, as it's a lot easier to change or fix any problems when they are just lines on the paper. 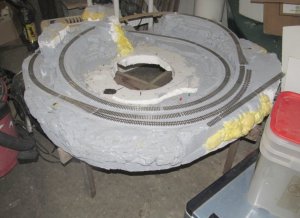 I have just got done edditing this thread to bring the photos up to full image. the narrow gauge minni layout is now in my garage. In my scrap wood pile out in my collapsing pole barn, I found some supports I had made for a small Thomas the tank engine layout I had made for my #1 son. that layout is long gone, but the supports, when put together make a rock solid support, holding the layout about two and a half feet above the floor. The supports are almost perfectly sized fot this little portable layout
Reactions: micahrogers

Had my brother in law visiting this weekend. Did not want to be unsociable, but wanted to work on trains. Pulled the portable out of the garage, so I could work on a layout without disappearing into the RR room.

I had some bents salvaged off my old central peninsula. Two fit as they were, with some trimming of the foam scenery. For the other three , I cut some meat tray foam material to the shape of trestle bents, and trimmed them until they would fit the existing scenery closely.

Then I cut the leftover bents to match the foam templates.

My technique for painting rocks has changed since I started this project. I used to go my basic coat of paint on the rocks close to the color I wanted as a final color, and do shadows in the crevasses with darker washes.

One issue was it was hard to get some areas that should be in deep shadow dark enough with washes. Another was , with time paint fades.

To combat these issues, I now do a base color considerably darker than I used to. And do highlights on the raised areas to lighten them up, leaving the rest in shadows.

I figured it would be a lot easier to paint the area under the bridge before installing the trestle bents.

After the paint was mostly dried I glued all the bents in place, excepting the one in the creek, which is just there right now. When I'mabout 1/2 way done with the water effects on the stream, I'll install the last bent, and start the vrossbracing.

Like this "mini." You can get a lot of modeling done in a small area. And at HOn3 all the better! Tom

That is true, and I have some re motored HOn3 locomotives that need running in. This is the only loop of track I own.

The layout was under a cardboard box that got wet enough to come totally apart. Thankfully, I had painted the plywood on both sides before installation, so it did not warp. The bridge deck was deformed, but did not come apart, and I found it wile it was soaking wet, and was able to straighten it out before it dried.

I had glued the flex track down with white glue, something I highly discourage. I was lucky, and it only came loose at the ends of sections of track, The loses ends did not reattach, and there is homabed under the track, as well as plywood, so I will be able to fix the kinks quickly with 15- 25 spikes.

One big advantage of a portable, is if you are about to undertake a messy job, you can tote it outside. I mixed up a batch of dark gray acrylic paint, to get a base coat all the way around this puppy.

It is still outside, waiting for the paint to dry, as it is a very tight fit into the garage past the Wife's 06 Miata. The other garage door won't open, since a wild turkey Tom crash landed into it. One of the joys of rural life, a mile from the county courthouse.


The next step is to fix the kinks, so I can run the fire out of some narrow gauge trains.

Later I will do some scenery work, especially a central mountain, that will be removable, so the layout can be used under the Christmas tree. Possibly I will work with Dr Tom , and do winter scenery.
Reactions: zathros

Like the paint job on the layout. Like that Classic Red Miata too......its in good shape. Tom

A small layout with much potential and a nice run. Very nice!! 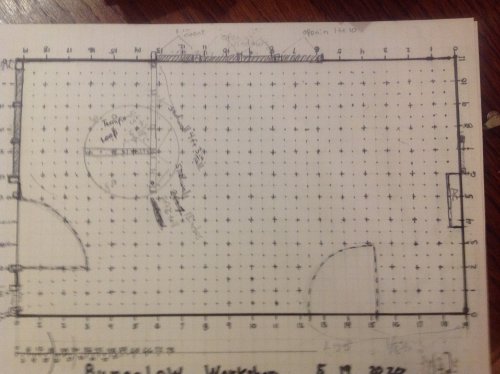 Thevplan for how the loop will fit in the bungalows work shop. The track will be close to eye level. So there will be room for a lower deck 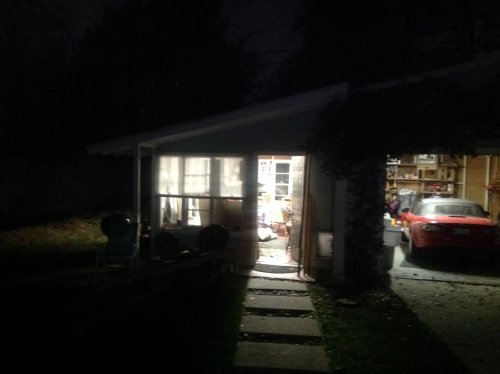 I have separated the roadbed of theclowest track from the foam. And removed it, to install a trestle. This will reduce the grade ar the bottom of thrvgrades. As well as shorten the grades, while increasing the visual Interest. 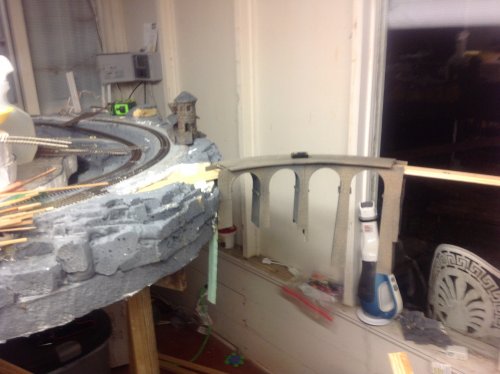 I have removed the outside track at the passing siding , and am hacking in a wye off the two switches , using this volmer,(I belive), curved viaduct , which was recycled off the Gegokayoosa loop on my Clarksville. Layout.


With the loop. I can use this for continuous running. With a wye attached; it can be a return loop for a larger, yet unplaned HOn3 layout.


In the background, you can see studs. I'm going to add insulation. And shetrock as I build real benchwork. Have oredered. Materials from Lowe's I can pick up tommorow . 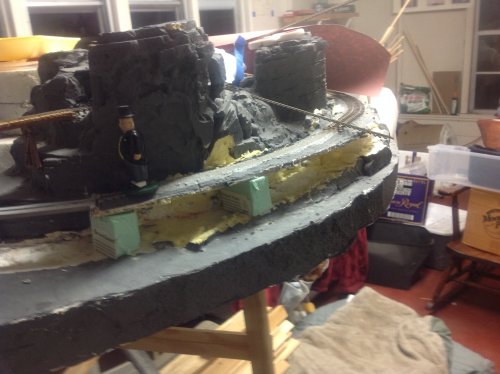 The fat controller , AKA Sir Toppum Hat, is overseeing the rebuilding of the grade. And the creation of the next awesome trestle.


Now that I know I can post photos off this ancient I pad. I will try to be better a out sharing my projects.
Reactions: micahrogers

I love the way you train guys do terrain. I really wish I could bring my terrain up to this level... maybe one day. 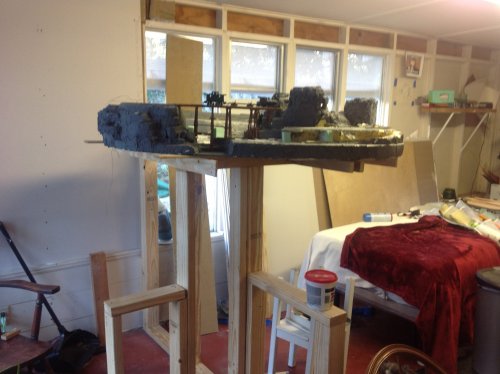 Earlier this week, I got some insulation up on the walls of the garage workshop at the Bungalow. I got two pieces od Sheetrock up before running out of sheet rock screws.


Them I started benchwork near eye level for the loop, leaving space below for a future lower deck.. 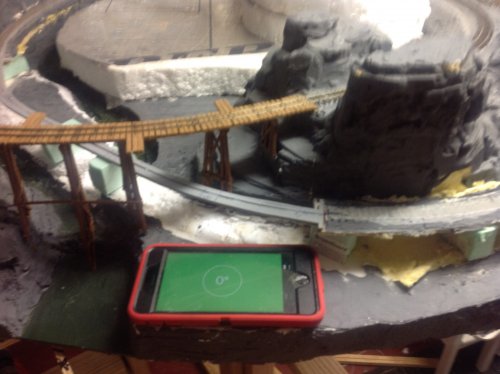 My phone says the bench work is level, we will see if it is when it is fastened to the wall and the floor. 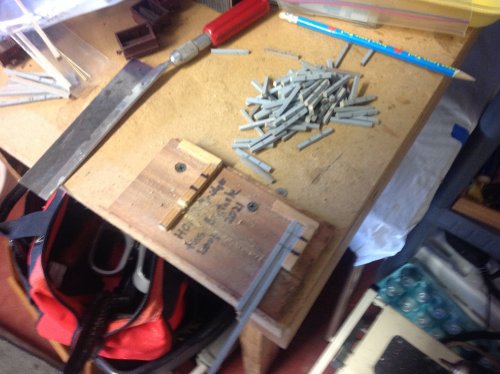 I made a jig to cut bridge ties. Have do right that before but screwing it to the workbench was a big improvement. 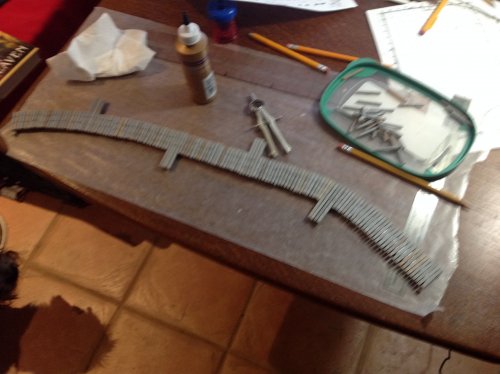 The top of the bridge deck . I will try to get some brown and some tan spray paint, and try to get this closer to the color of the upper bridges timbers. 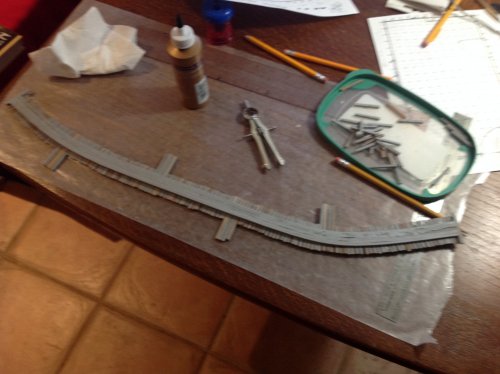 This is the underside of the bridge deck. The stringers are yellow poplar and aromatic cedar, lamenated with clear gorilla glue. This makes a really strong bridge deck. 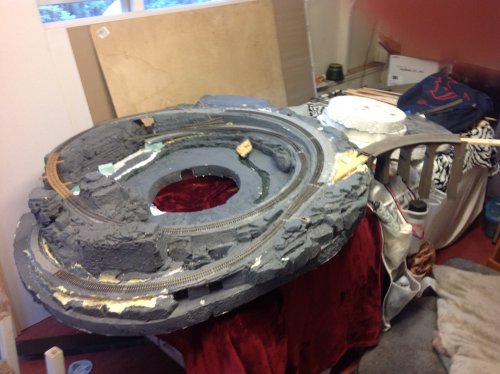