Not full renders..but best place to add this..

When into a frenzy of stuff lately and just came out of the 3d world for a change ...

I have been modeling and converting a whole bunch of things, some just for animation and others for card modeling...lots of Star Wars stuff..as I took a sudden fancy to some of the ships..though I like Star Wars I am not a fanatic about it, so those of you that are..I'll say it right now..I don't care if the antennae are in the wrong place! They are just meshes to me.. just something to tear apart and play with! so...


some of the stuff is mine others is ripped from games.. all is adapted a worked and fixed or in the progress of being usable, for whatever purpose I will use it! Most will never leave my HD, but some will sneak out and become a new card model... time will tell... 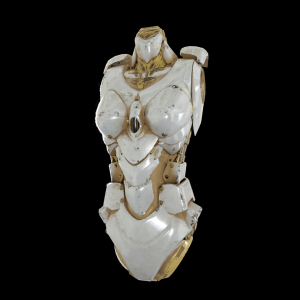 These all look really good!!!

Rhino..in most cases..actually looking back..they are all rhino screen renders .. nothing fancy!

another doodad been keeping me busy...

I've been playing with the free Raytraycer "Neon" for Rhino. It's "FREE", it works really well.

I use Neon.. It looks like you have your image Oversaturated..ie too much light.. but that also can happen when it has no actual texture for Neon to work with and is only working with the object color.. set either from Layer or by object can make a big difference. I always set color by object. then do the UV thing, and even with a simple metal texture map the texture to the UV and the Neon has something to work with to bounce light off of. Make sure to turn on SUN and turn off Skylight .. sun is better for placement and shadows as well as color and so forth..then once you get the hang of things.. you can start getting into the Invironments for you lighting ..that will really make a total difference in what you see in your renders!!! 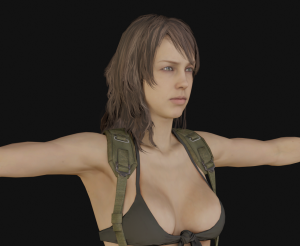 I need a UV turorial. I can't make heads or tails or it and I know it's something simple I am missing. I did have lights on it, and the model is one color with a very smooth surface. It was the only one I could find at the time. I am not too proud to take any help.
Reactions: Cybergrinder

This is a better representation of what Neon can do, which isn't much in my hands!

zathros said:
This is a better representation of what Neon can do, which isn't much in my hands!

send me the .3dm file and I will do a simple UV tut on that ship. so you are familiar with it.

I went ahead and picked up Rhino 6 yesterday, as I was reading in the threads that it ships with cycles render engine as well as plain jane Rhino Render.. they are only using 1/10th of it's ability and have no node interface for materials..but the most of the render/materials etc have changed in the last few months since I quit using the beta build, I also understand they are working on full PBR rendering capabilities so there is promise! I will see if I can somehow work up a node editor of some kind for rendering as it also ships with grasshopper. I also picked up a free trial of Vray, but they want an arm/and a leg for it which I just do not understand as it, is the native render engine in several of the programs I already have perpetual licences for and they were in NO WAY as expensive as what they want for the plugin for Rhino!!! Go figure. It is far cheaper for me to convert to .FBX and import to say, substance painter, and REALLY add some great texture, and render in Substance with Vray! I can also now export directly from either Substance of via plugin to Unreal Engine and get UNREAL images and anim on the fly! So spending any money on a Vray plugin for Rhino is just ridiculous! but it is nice..even though it is basically Neon on steroids with controls and more options!

No fancy stuff here ..just a basic Albedo map what we used to call a Diffuse Map and Sun for the light set in a studio environment, ... VRay is being used as a basic Raytracer in the new Raytrace mode, but also as a screen interactive alot like Neon.

and one in Blender Viewport

and again using Rhino-Cycles (WAY LONGER RENDER TIME THEN Blender) in view port...it won't use the Normal Maps as it only will use bump maps, so won't be doing many renders in Rhino... My free trial for V-Ray ran out and I will never spend the money they want fo it!

and another in Blender Eevee Realtime...

Finally figured out how to get cycles to render in the RENDER VIEWPORT on the fly ... ..and not many people use Rhino..for ART type rendering or the like!
Last edited: Sep 12, 2019
Reactions: Cybergrinder, spaceagent-9 and zathros

This MODEL has NO Geometry..it is just a FLAT PLANE! The effect of dips and the like come from increasing the resolution of the plane to many faces and using a combination of Displace Modifier and Normal Maps IE just Maps/Pictures to control Depth/Reflection/Roughness etc. 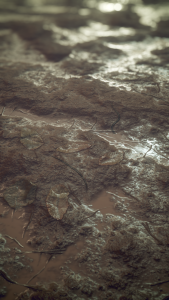 And another... Actually on a FLAT plane, ( no model) and created by height_maps, and alpha_channels. 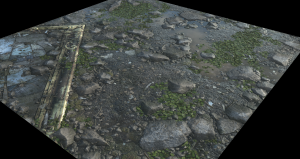 That's so far above my pay grade, I can only say, Damn!!

I just animated http://www.zealot.com/threads/not-full-renders-but-best-place-to-add-this.180270/#post-1023573 and had her doing a traditional belly-dance! Haven't rendered it as yet, as I have to work on stuff and to fully render out 300 plus frames is going to take a while... if I get the time I'll see what happens in Unreal... should take far less time once it figures out the lights and stuff... I'll post it if it works...

Just something that is in the works... Just a mock-up! 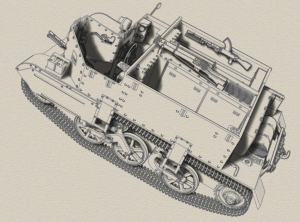 I am just concerned with getting a prototype to build off of... for a card model!
Last edited: Oct 22, 2019
Reactions: bigpetr, lyter1958 and zathros

I just found a nice simple but detailed enough card model of the Universal Carrier, it could be greebled into something awesome!

zathros said:
I just found a nice simple but detailed enough card model of the Universal Carrier, it could be greebled into something awesome!
Click to expand...