With support troops like the ones we have here I doubt it would be an option NOT to release the revised file.

DanBKing said:
Looking good R-F!
I'll wait until you have built your version, before I attempt mine .....
Are you gonna try the water shaping technique on your build ????
Click to expand...

@Rev Ian I used the water shaping technique in my build of UHU02's Discovery, to get the command sphere nice and round and smooth.
There is plenty of reference in that thread, and Zathros has a lot of knowledge of the technique as well

looks a great fun model to make. thanks for the water forming link.
Reactions: Revell-Fan and DanBKing

I have only one question; why were there no football jokes or attempts to kick BB8 in the movie? He has a uncanny resemblence to a branded name of football. (Soccer for the US guys )

@Revell-Fan ; make a leather version & then we can play Star Wars Football! (his head can add a new dimension to predicting the flight and passes...)
Reactions: DanBKing

CG, that idea is fantastic! Even I hadn't thought about that. It really would be cool to have a soccer ball with that texture.

However, when the desert camp was under attack BB-8 was thrown through the air like a ball. I doubt it was the fully equipped electronic one.

BTW, what about using the lightsabers for baseball? Might come in handy to slice the ball in halves on occasion..!

Not sure about the baseball..... "And it's out of the park!!" "No Frank, the catcher is picking up the pieces." or Kylo Ren temper tantrums when one gets struck out, could be lethal....:fight:

any news if he will let you release your HD version

I'll send him the revised pattern and ask him for approval first.

Texturing of the ball is complete; I'm now trying to improve the head.

He surely does not have a patent on that shape which is a common geometric shape. I don't see any problems with you posting that model here. I would like to see what legs anyone would have on this, on the geometric shape, or the Star Wars front? No one has any rights to this model. If someone sent me a request asking for permission, I would not respond, not wanting to claim ownership over anything "Star Wars", if you think about it.

all he did was used some basic shapes from something like pepakura and slaped a texture on it. you practicly made a new texture

I'm using the unfold, size and basic texture another artist has made. So I feel it is important to ask and give credit to the original creator of the model. I'm only the tinkerer, but without him there would not be such a BB-8.
Reactions: Tonino

Alright, he has got a ball: 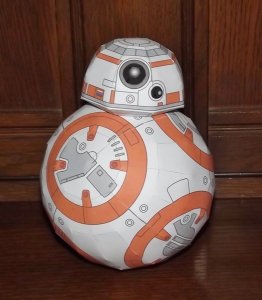 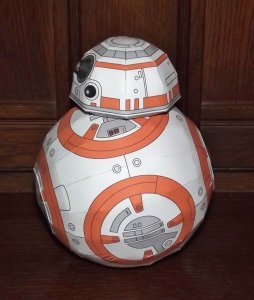 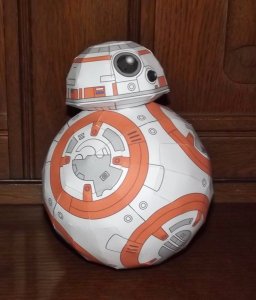 I tried to make the sphere as seamless as possible. I cut out the pattern quite close to the outlines and scraped off any visible light grey lines with my cutter. I'll definitely have to practise the water-shaping because my first attempts were a bit messy (maybe I used too much water or the paper was too thin; the result started to wrinkle in the corners). So the sphere was assembled "dry".

I cut off all flaps, cut small glueing strips from scrap paper and glued the pieces together on the back side. Combining the two halves was a bit tricky because the paper strips I added took away some of the flexibility of the parts. I managed it though. The toughest part was attaching the two octagonal end caps to the ball. This is where I got a bit sloppy. You can see that in the picture directly above; if it had been done correctly the texture would have ligned up perfectly. But, well, there are many ways to display the model and hide the flaws. (The easiest way would be to print the pieces again, cut the texture greeblies out and glue them onto the existing panels.)

The unfold of this sphere is ingenious because it is very efficient (it saves much paper; believe me, I edited it and each result required much more space) and it is pleasing to the eye from various perspectives. If the sphere had been made as a series of orange slices or rings it would have looked strange if it was not displayed vertically / horizontally, as if it was not aligned correctly.

However, I'm not finished with this one yet. Right now I'm experimenting a bit with the head. I have entered a new level here because I am tweaking the unfold on a 2D canvas (since I do not have the original 3D model). Stay tuned!
Reactions: Maverick65, blake7, Tonino and 4 others

that looks to be a fun build! is there going to be a life-sized model(eventually)?

That would require massive alterations to the 3D model, so I don't know. But never say never!

I'm looking forward to giving this one a go. I've got the balls for it ......
Reactions: Cybergrinder

Yep, this is a very ballsy project! I have already made three of them and I can't get enough!
Reactions: DanBKing