Started glueing again Will keep you informed about the progress... Actually I am working on the servo covers on the bottom of the wing... Neat little thingys which add quite realism to the marvellous model
Reactions: zathros

I am just working a bit on the servo actuator covers. Pretty neat details and the fit is great as always! 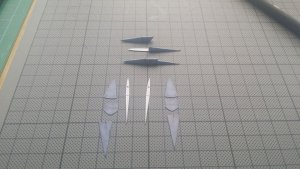 Those bits and pieces really do add to the realism, especially with one that's as nice as yours is. The rivet counters will be looking for those!
Reactions: McTschegsn

Shame on me for not answering this long time. Was pretty busy with R/C modelling as the weather outside was great almost all the time...
Continued a bit on my Kfir. Actually mounting the Canards and the Servo actuator doors. Posting via mobile so I will provide some pictures later on...
At least I am still alive
Reactions: zathros

The last sentence is the most important!!!
Nice to see you again.

Hey, feel free to post our R/C adventures in our R/C section. I have two R/C Helicopters, they have collective and fly like real helicopters. I have done chandelles and the like. I have to spend more money to gets ones strong enough to loop. I also have a Trojan and SE-5 BiPlane Park flying airplanes. It's amazing how slow these things can fly. You can fly around with them in you back yard. I have around 4, maybe 7 battery packs, and always keep them charged. If you use the prop all the time, you get around 8 minutes of flight, but if you are smart, use the thermals and glide, you can stay up there quite a while, they can get away from yo if you aren't careful. You know how R/C flying can be stressful as you hate to crash these tings. I had a stick and wing plane I made with a 5 foot wingspan and .080 diameter piston motor. It had a 10 inch prop. It flew like the dickens, but one day I flew it, and the throttle servo jammed, and it went vertical, stalled, and came down with a vengeance. It completely destroyed the model. It was amazing to see the plastic iron sharing material shatter like glass and it come apart. I was with a few friends and they were also amazed. They were also shocked that I wasn't pissed. Seeing that plane crash the way it did showed me how strong the design was. Hard come, easy go! I like the electric planes, they are far more amazing. The State of Connecticut told me I would have to have a million dollar Policy to fly planes that big anymore, so that ended that. With the new Bind and fly controllers, you can buy once nice controller, and use it on many plnaes, or helicopters, boats too.

I have a beautiful sloop R/C I have yet to build. It's a monster of a build. I made and gave one as a gift to a women who used to let me take out her 10 meter Pearson Yacht, and in those days,I could sail it single handily. I even used to set up a Blooper sail all by myself. I was nuts when I was young. She put the ship on her fire place mantle, I had customized the hell out of it, making a dingy out of fiberglass over a paper boat frame work I made, and I did it in front of her in her luxurious home, she was so fascinated. I used to date her daughter, but that ended and we remained close friends. I was young, and that was in the 1980's. I did not fully comprehend the nature of the friendship, someone let's you take out their $100,0000 dollar sailboat to play with! I used to captain the boat when she would want to take clients on sailing jaunts in Long Island Sound, a treacherous are that has and unfathomable amount of wrecks at her deep bottom.

I was an awesome sailor.. Looking at the knot meter,, were were doing 3.5 knots, and I told the guy he had the sail too tight and to release the main line, he insisted I was wrong and I also told him the slider on the rail needed to be moved forward. I released the mainsheet, slide the traveler forward, and release the Boomvang, to allow the sail to form a proper airfoil shape, these people never looked an the tell tales on the edge of the sail. This boat had a 50 foot mast with a fully battened main sail, and a 1150 Genoa, with roller furling. When I was done adjusting, the ship went up to her full Hull speed within seconds, which was 6.5 knots, this shut up the CEO of a very large bank, who released the helm and promptly sat down.

When he docked he asked me if he could pay for my services on his yacht. I told him that I was not available, as my interest lay elsewhere, and my sailing experiences were with my friend, and whomever she wished to bring along. The look on this guys face was amazing. I even swapped out the Yanmar Diesel engine, and did not charge her a dime. I use to rebuild the winches, torque the bolts on the 5'0" in fin keel, and generally maintain the boat. She gave me keys and told me to take her out whenever I wanted. One day I went there and the Bilge pump had failed. The assholes who ran the dock did not see the boat was 12 inches below her waterline, I went in and fixed the bilge pump and then used Clorox out the interior, getting rid of the bilge smell which can get quite stinky. She happened to come up the next day, shocked to find the windows open, I was airing the boat out overnight, then I told her what happened. She was generously grateful. This was a wealthy woman who shared her wealth, helped me out when I was in need, and told me, confidentially at the time, when she passed, all her wealth was going to designated charities, a couple which I helped her chose. Her daughter had the idea she was getting it. I told her she should tell her daughter, as that was a main reason why we broke up, she was a slacker. Sorry for the blathering. 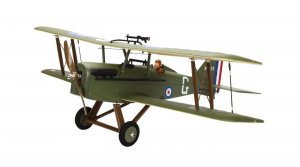 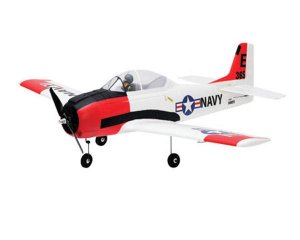 My best flying copter with a crude body redo, it weight almost 2 grams less than the plastic body! This one flies the best, I put an aluminum swashplate which made all the difference :

Finally continuing building this masterpiece of Yoav.
Just fitted the Canards and the servo actuator covers. Now going for the rest of the fiddly bits

Sorry for the bad lighting. We moved to a new location and I am still dealing with the light situation

Wow!! Sent you an email. I didn't know you were a pilot too. I had a Pilot's license but gave it up for medical reasons. I am a Piper Cherokee fan, and flew them almost exclusively, as there was a newly restored one with a fantastic engine, that was at my disposal. I flew a few Mooney 235's, co-piloted a Piper Archer and Apache, and got to fly co pilot in a Beechcraft 34, one of the highlights of flying, it is a historic aircraft, and for good reason. I flew a Beechcraft Baron, but I really don't like the single pass over, share, yoke on them, kind of creepy if the other pilot has a heart attack of death wish.

Long time no see and no building progress but never forgotten

I continued with the Kfir and now I proudly can state: I finished the beautiful belly of the beast

I am not going too much into details... Fiddling around aith the varoius air intakes glueing them to the fuselage wathing this baby growing is very satisfying.
For the nose I took the easy way and took a toothpick and formed the housing to a snuggly fit.
The cannon barrels are made of carbon fibre (which shines a bit like gunmetal grey already).
I must mention it again: The fit of Yoavs parts is gorgeous as the whole model is.
I am not sure whether I build and mount the wing tanks but that can be done easily when the build is finished and when I decide that I want them.

Seems like I can not upload any pics? Server tells me that the pictures are too large. Anyone an idea what has been changed or am I doing somethin wrong? The pics are exactly the same size as I uploaded every time...

Just read about that uploading thingy... Well I will be patient... Besides: The Kfir is finished
Reactions: Tonino 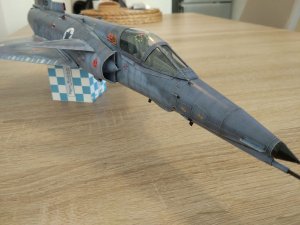 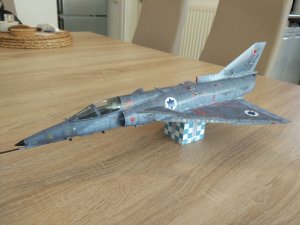 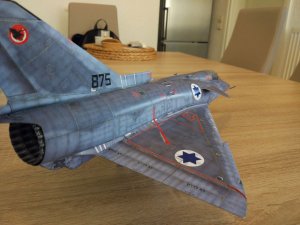 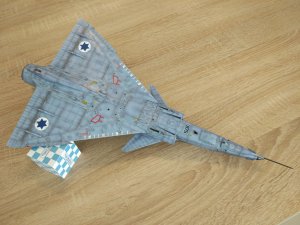 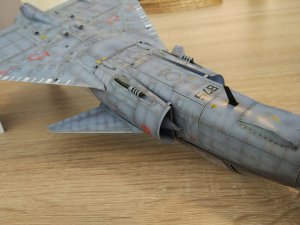 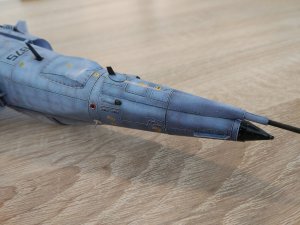 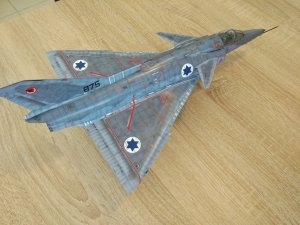 Finally!!!! It was worth waiting, this is a real beauty!
I feel this plane as a little nephew, I saw it growing day by day, and now it's here, shining in all its glory!
Many compliments! Great model!!

Thank you Tonino. I'm a bit proud of that bird too Will just finish the stand and wait for good weather to take a few beauty shots outside

Well, after seeing that, I will never attempt it. That is one beautiful jet. Nice model too! It really looks like the real thing!!!
Reactions: McTschegsn
B

Unfortunately the weather is bad at my place so I had to take a few shots inside...
Next time the weather is better I will take some pics outside because of the better lighting.
Enjoy 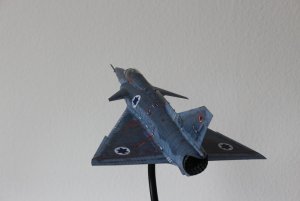 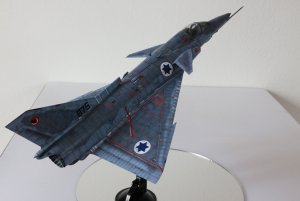 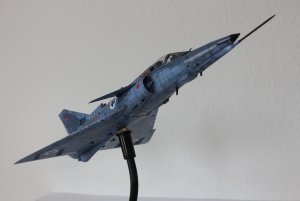 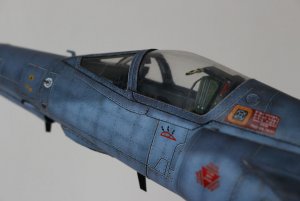 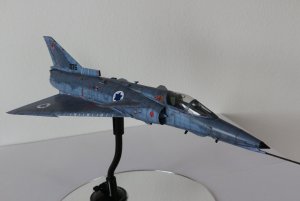