If you mean the new Enterprise from the J. J. Abrams's "reboot", UHU02 has made an incredibly awesome model of it. Is that the one? Then, you can download it from his page,

I'm not sure if we have it here in ZEALOT. Before you get there, please make sure you know the rules.

There is a "NEW" Star Trek Enterprise here in the DSL: http://www.zealot.com/forum/downloads.php?do=file&id=961

As for USS. Enterprise NCC-1701-E, can be found here: http://www.geocities.jp/ikenohata2005/papermodel2-e.html

Good luck with the builds. I look forward to seeing how they turn out.
K

Rhaven Blaack said:
There is a "NEW" Star Trek Enterprise here in the DSL: http://www.zealot.com/forum/downloads.php?do=file&id=961

As for USS. Enterprise NCC-1701-E, can be found here: http://www.geocities.jp/ikenohata2005/papermodel2-e.html

Good luck with the builds. I look forward to seeing how they turn out.
Click to expand...

Thank you that's what I was looking for though the second link for 1701-E works but the model is un-downloadable as far as I can tell. It's hard to just work on 1 model at a time. I'm finding that out........
K

You know it never occurred to me to click on the 'next' button for more Star Trek models...... I'm having a lot of senior moments here lately

Kbkline. I don't know what your paper crafting skill level is, but, as I have been looking for the same two ships, I decided to do a search for them for you. Uhu02 and Makino's design for the 2009 iPrise (heavily armed apple store) is really difficult. There is a link to a smaller (1:1800 scale i think) version of it made by Rawen. In the downloads section here that is pretty good!!!!,!
The finished model is about 8 inches long. I am a total NOOB and I a m very happy with my result. I would advise that you reinforce the nacelles pylons with something, as they are too flimsy otherwise. I used poster board. As for the Enterprise E. Unfortunately, I think that the Geocities link is broken, but I have found a download that works for a Sovereign class papercraft in 1:1000 scale. Unfortunately, I don't think that it has the nacelles in it yet. Here is the link:

I don't think anyone's done a version with a good build plan that was large.

Its always cool to see different people's skill and talent evolve an effort.

I'll make a start after the Nebula Class is done then.

I don't think any of you really want zosho's new 1701-e. do you know anyone who has it? has he restricted his free model to a selective give away or something? whats going on with this, why doesn't anyone have it?

I honestly don't know? I've been absent from this hobby for a while so I feel almost new to it all over again now in terms of the models available and the "trends". But I had noticed that there was a lacking so to speak of Enterprise E models which is why I offer to design a new one.

i built Zousho´s old Ent-E and had no mayor problems! there were no instructions but with a logical combination you can figured out how the parts come together! but i cant say, how his bigger E-version is!

well I sure would like a real hard line definition of a free model, what you can do with one, such as re-sizing, offering modifications , and why re-presenting it when it is unavailable , goes against some kind of theoretical Mafioso, and respect to a temperamental artist's feelings of what should be done or not done, TO A FREE MODEL.

I honestly don't know what the deal is with it? Or the creator's reasons for it no being available right now?

If I were to create a new 1701-E then it'd be completely from scratch as far as the 3D design goes. I'd possibly use existing images to help create the textures. But I'd prefer this than editing what has come before.

My personal feelings are that you don't alter, re-colour, re-anything to my models without permission if you intend to offer it to others as a download or private share. But that's just me, everyone has their own view.
Last edited: Feb 12, 2014

I've never understood why someone would create a model to be released and then restrict it so that only a few can actually build it. I understand that designers like credit for their work and that some despicable individuals take such credit for works that aren't theirs, but if the model isn't being shared or built, what's the purpose of even releasing it in the first place?

show me a paper modeler who has made anything considered upper level income off of their models and I will drop all my criticisms of the whole free models being restricted deal going on with me. and I do say this with the greatest respect for all levels of paper modelers.
nd to prove it, here is my latest work, do with it what you will, except piracy, because I freely give it. 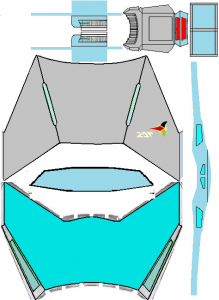 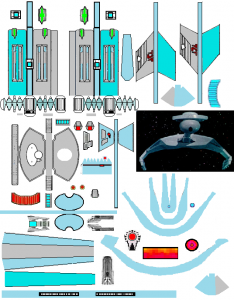 Upper level? No, not that I'm aware of but you can make a reasonable income from this hobby. At the end of the day it takes time to create these models and some skill. I do believe that people's time is worth something so I have no issues with the sale of models. I used to sell my own work but later decided to just make it freely available as it was nicer for others and also a lot less hassle. But each to their own...

I most certainly think that if someone makes an especially complicated model, much more than what you see in the Klingon up there, that they should be able to sell it. that it should not be pirated. but it someone wants to present models for free, by doing so, you will have the full spectrum come at you and you should not be babyish and play games with your free gift.
to do so would be very rude.
again if it is offered as a prize for solving some puzzle or riddle of proceedures for release of the model, as a reward, fine.
again, you are JOINING a club and MUST OBEY THE RULES, if you want the reward. again, no pirating.
thank the artists and authors and hosts who presented all these free models, as I would have been stuck making my own crummy cereal box cardboard cutout attempts with no learning jumps from other's more advance creativity and skills.
when a society abuses and loses its artists, it usually fails.

If you make a model based on your own story, with ships you designed, then yes, you would expect that you have some rights, provided that you have protected yourself as the law demands. If you hash out a Star Trek model, then all you have done is reworked someone else's work. You have no inherit rights to works created by anyone else unless you have obtained an license. That's just the way it is. You can't have it both ways. You can't Rip a design of an idea that wasn't yours to begin with then speak of piracy. That's ludicrous. It's bombastic.
You must log in or register to reply here.
Share:
Facebook Twitter Reddit Pinterest Tumblr WhatsApp Email Link
Top Bottom