While I am gathering my materials to post a tutorial thread as requested, I am once again posting photos of a project that have never been seen in their entirety before. This project came about four years ago with the intention of competing for the top prize at a local IPMS competition. We had already been commissioned to build a large scale B-52 that year, and we knew that if we wanted to bring this project to fruition, we would have to start building several months before the competition.


The first step was building the body from the plans we had enlarged at a local printer. The inner structure would be layers upon layers of can finally culminating with a white Pepsi which would be the final color. The body of the droid starts to take shape: 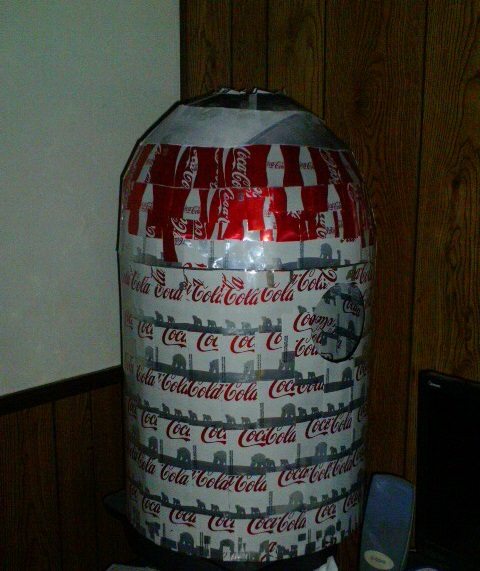 After a few more weeks it starts to look like a R2 series Astromech instead of a domed garbage can: 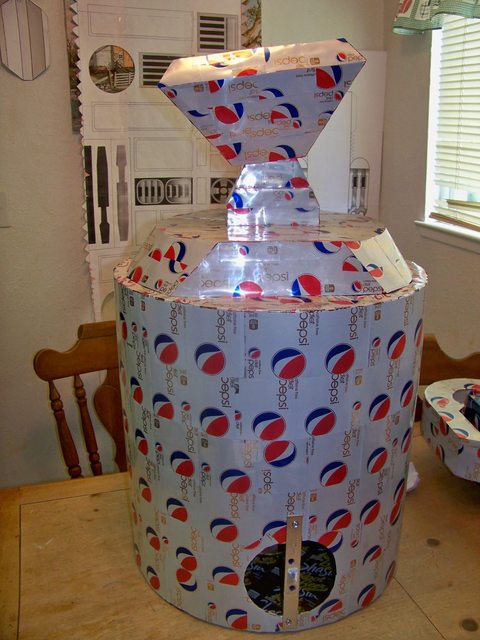 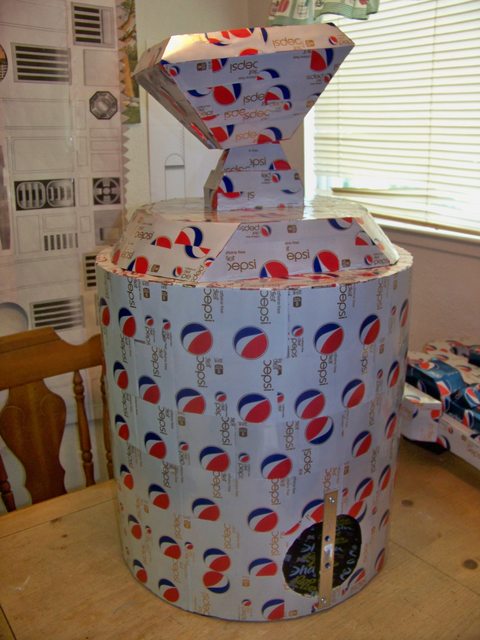 Next we start working on the two main legs. Again these are made with an initial outer structure folded into shape then reinforced with layer upon layer of can. Here you can see the layers of Coke being covered with layers of Pepsi: 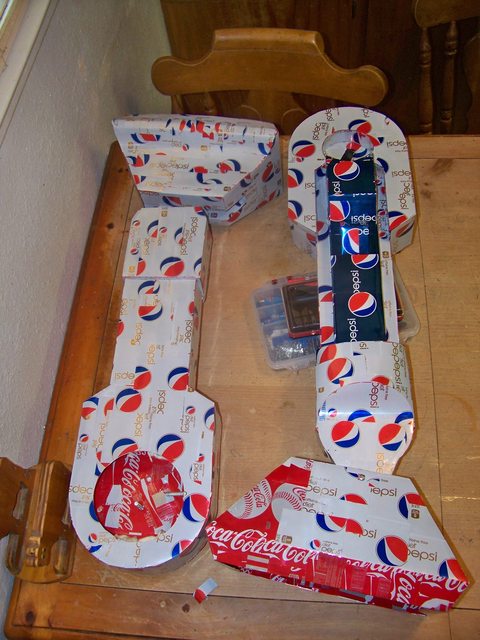 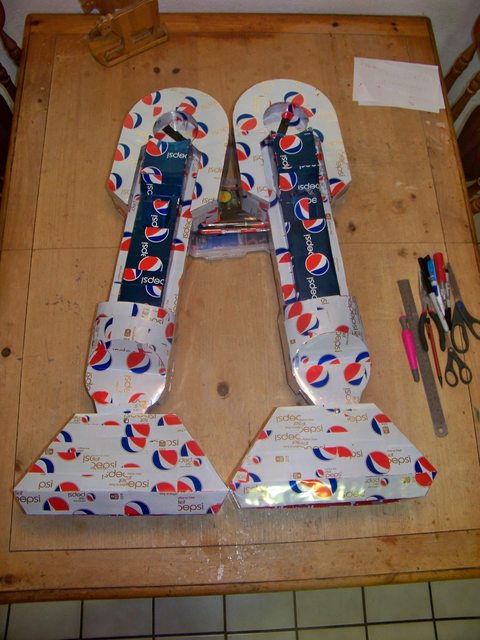 Now the finer details are added. We follow the highly accurate paper model pattern to a T and add in all of the parts enlarged to the 1:1 scale: 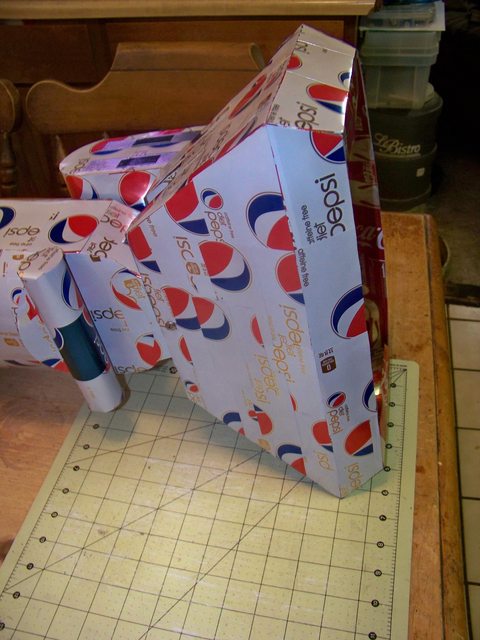 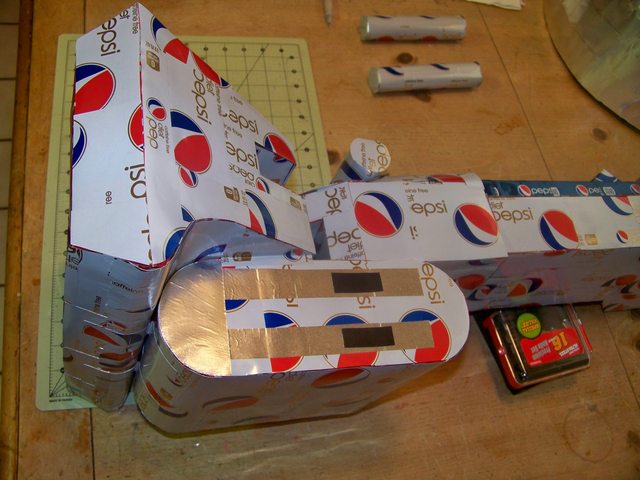 Then at about 3 months in, R2 stands for the first time He isn't quite finished yet and there's still a long way to go: 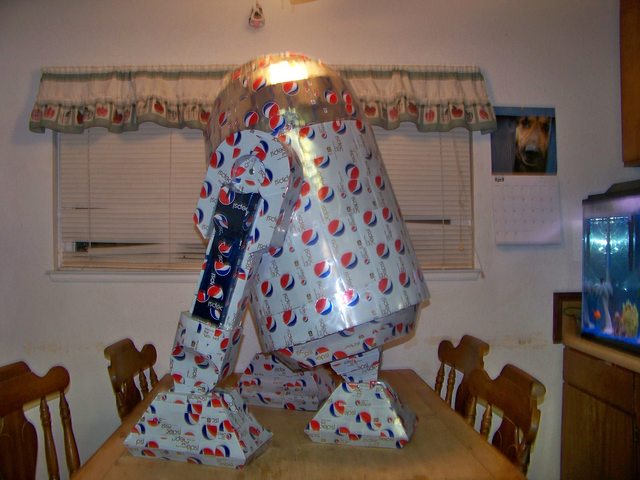 The dome needs a lot of work and the detailing work on the body begins Here we use specialized colored tapes purchased from an industrial supply store to create the details on R2's body: 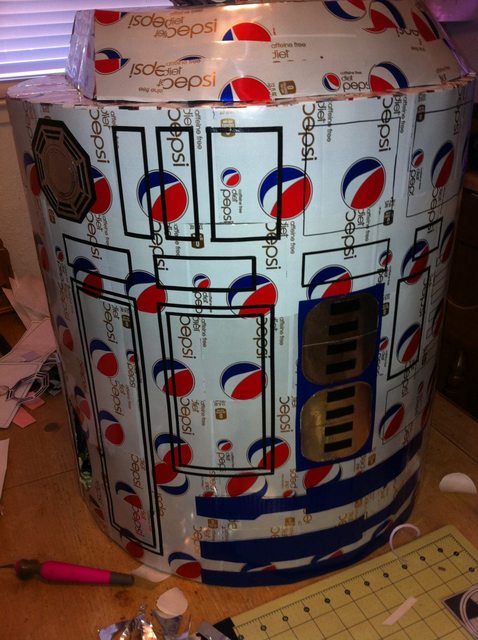 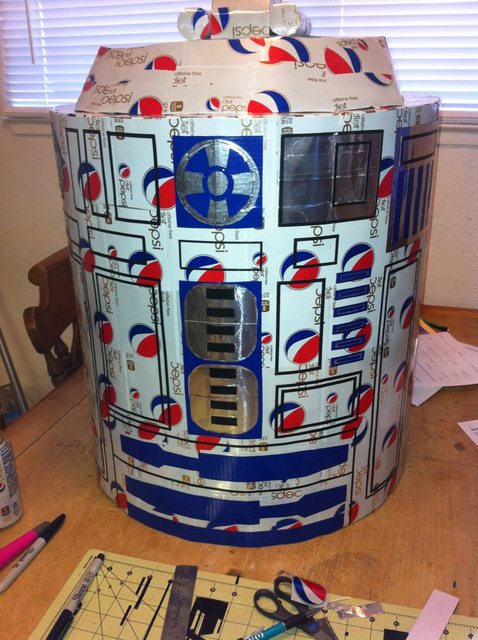 With the detailing complete, we start work on perhaps the most important detail, R2D2's dome: 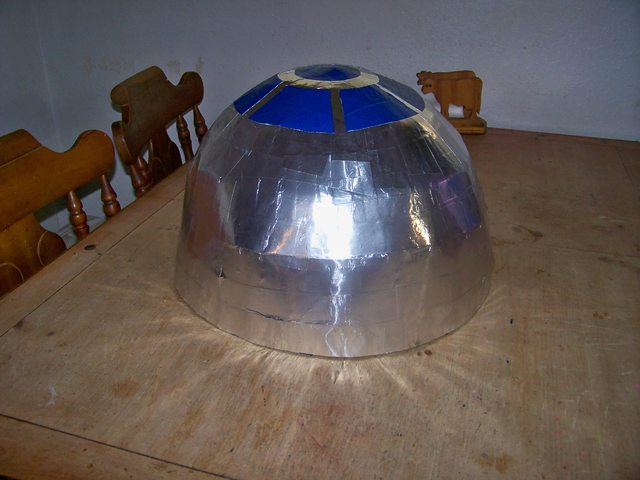 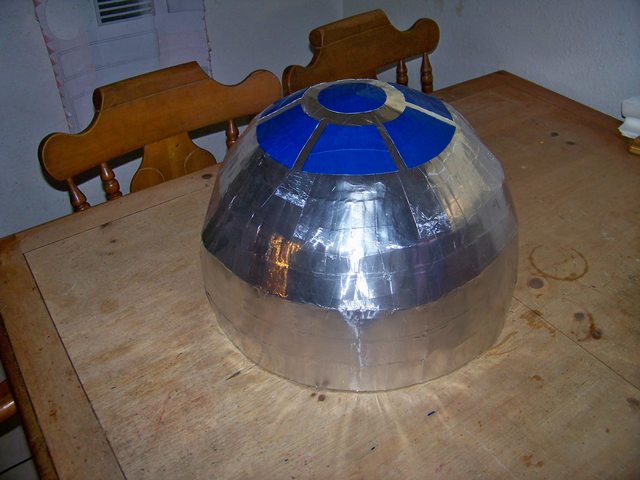 The inner structure of the dome is all can while the outer skin is aluminum foil tape. I opted for this since it showed better results than just painting over the can and it gave it the polished metal with a tad bit of a weathered look that I was going for. The colored areas are simply colored duct tapes purchased at a Hardware store: 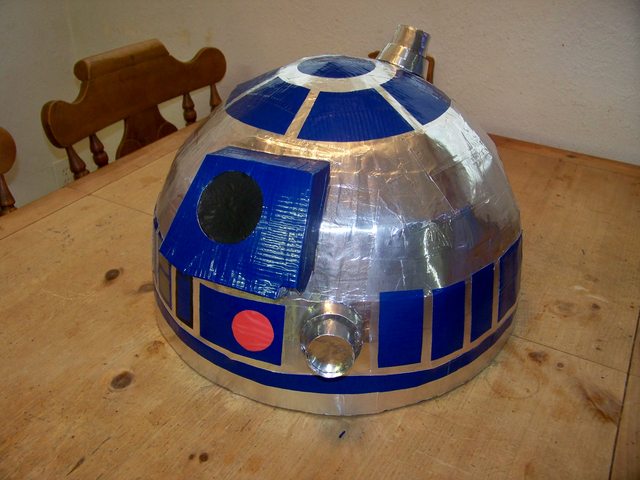 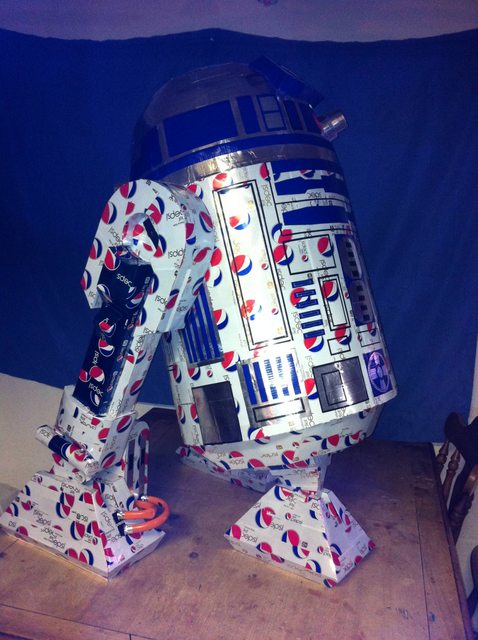 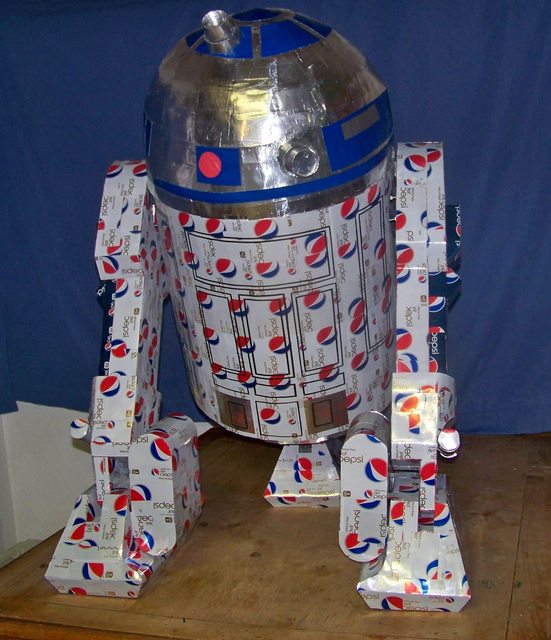 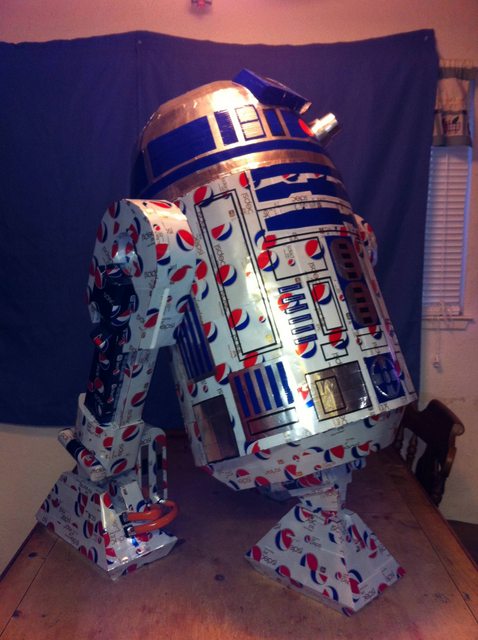 We enter the local IPMS competition in the Miscellaneous other than plastic category and to my surprise and shock, soda can R2 took home the top prize of best of show, beating out some very tough competition that year. The final tally was 4 months build time and well over 1400 cans of all makes and sizes. R2 has Root Beer, Coke, Pepsi and Shasta Cola layers built into him.

R2 on display at the show where he took top prize: 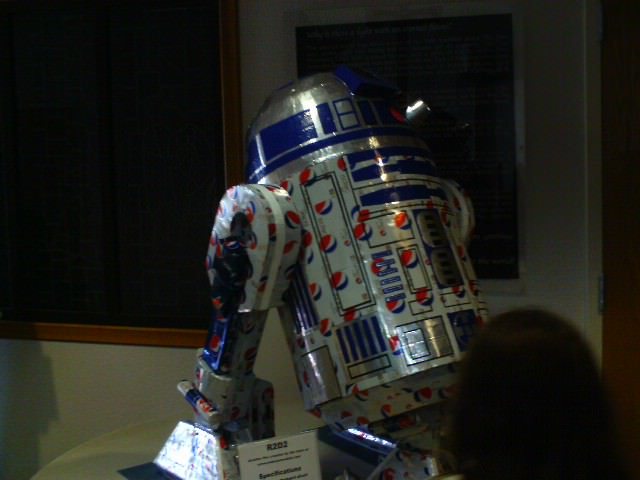 After this build, I had no fingerprints for weeks due to the superglue residue, but that along with the multiple cuts, and glue incidents where worth it when kids and fans of all ages heard R2's built in Mp3 player with soundbites start chirping that familiar tone throughout the building. It was an honor to compete against paper, plastic and resin modelers and to also take home the Best Of show award in 2013!
Reactions: Boba Frett, ASC Mclaren, Revell-Fan and 1 other person

This looks AMAZING! You have done a FANTASTIC JOB!
Congratulations on winning Best Of show!

It has the correct colours on the body!!! The Coke markings look like some sort of sponsoring decals.

What an amazing build! OUTSTANDING!

Pepsi should pay you for that.

zathros said:
Pepsi should pay you for that.
Click to expand...

LOL, funny thing is we sent photos to Pepsi and some of the LucasFilm folks and never heard back!
Reactions: zathros

Figures, they don't know a good thing when they see it.

Or they felt bad because they did not come up with that idea in the first place.
Reactions: zathros

You could make the neatest beverage dispenser out of that. You could sell it for a fortune!!

Well I've been offered as much as $2500 for R2, but I wont part with him. I offered to build the requester his own for $3500, but he was dead set on mine. Interestingly enough, this R2 was built to accommodate foot drives, and motors for radio control application. He also has a MP3 player with speakers mounted under his dome. When left on, R2 seems to chirp at the oddest times, making it seem that he is cognizant of his surroundings...

Ghosts in the machine!!

This is the first time seeing this and I am sorry I missed it, This Mech Droid is awesome!!! Great job!
Reactions: Revell-Fan

Thanks! He has a personality befitting of this series of droids. Mounted under his dome is an MP3 player with speakers and on occasion, the wireless remote gets mistakenly activated resulting in R2 seemingly coming to life at the most inopportune times. Here I have a humorous exchange with the pesky droid one morning and as usual he had a ton to say. This is what I call 'droid problems'!

I am hearing from the powers that be that Soda Can R2D2 will be making an appearance in an issue of Fine Scale Modeler in early 2018...
Reactions: Boba Frett and Revell-Fan

I am proud and especially honored that Soda Can R2D2 will be included in FSM. It is a testament to a process of building true to the art and not using an under structure like some of the new-fangled builders that are slowly entering the medium right now. To me, this takes away from the purity of the art and serves no further purpose than a crutch, which as I have demonstrated, is not required in order to produce these works of art. I can't imagine what the IPMS would have thought if I had built some sort of under structure of cardboard under him and then simply overlaid can. I dare say I would not have walked away with a Best of show. No sir, Like all of my works of art within this medium, R2 is produced almost entirely of can and is a proof positive that there is indeed a method to my madness! 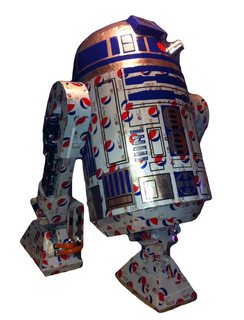 That would make for the perfect Pepsi advertisement!

I know huh! And right now with The Last Jedi out too! :fight: