Self-made Carnival Medal on a budget

One of the reasons why my other projects are on hold temporarily is that I was commisioned to build something for our annual carnival party at work. This year we were expecting some special guests, the incumbent Carnival Prince and Carnival Princess of our local sports club. As a welcome gift it was decided to create some medals, one for him, one for her and a third one for our music entertainer. The medals should look very authentic and representative - and had to be made within six days. My colleagues knew that only one man was able to fulfill this task on schedule - and on budget: Me. Of course. Who else.

So I was tied to a big heavy cannon ball and locked up in the basement, together with and old torch and a small window for fresh air supply, fed with water and bread on occasion when the guards were in the mood...

Alright, it wasn't that bad but the schedule was fairly tight because I had to fulfill my regular duties at work, too. I knew it could be done though and started looking for inspirations. I ran a quick google search and found some very nice medals. The free ones were much too simple for my taste, so I took a look at the commercial ones. Many of them were made of real metal and cost about 50 - 75 € and up. It was impossible to justify getting three of them at that price - and so a challenge was born: to create something which would look extremely precious - but which at the same time would cost almost nothing. With that premise in mind I swang into action.

I chose one sweet-looking medal and analysed its structure. Quickly it became obvious that it could be re-built using cardstock. The final object should consist of several layers which would give it strength and depth at the same time. I checked our storage and found two used sheets of gold cardboard. The sheets had a few dents and wrinkles but it was possible to cut around them or to place the cuts in a way that the scruffy areas were hidden by other elements later.

I traced the medal and separated the different layers in Corel. The result was printed, glued to cardboard and cut out to get a series of stencils. 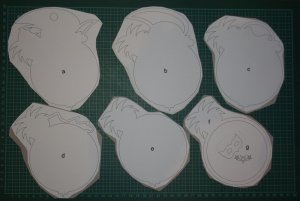 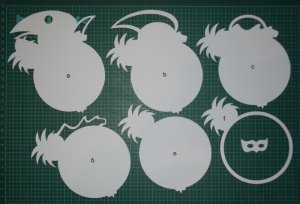 That's impressive, when people come to you for commissioned work. I have had much of that, but it was mostly commissioning the fixing of lawn mowers, holes in cars and the like.

Good to see you watching the thread, John, because I think you'll like it; the construction is similar to making a bas-relief.

Working with stencils is a bit different than working with pre-printed parts. You'll have to make sure that the parts are cut out more generously in order to compensate for the distance between the pencilled line and the stencil. So if you have an outline you'll have to cut not directly on the line but slightly below it. If I had had a bit more time I would have determined the perfect stencil which only needed to be traced and cut out but I felt the other method was equally successful. A big advantage was that I had absolute creative license on the project, meaning I did not have to obey any patterns whatsoever. The only important thing was to make sure that the layers could be stacked without issues.

Stencil A doubled for the first layer and the background layer. A thick layer of cardboard reinforced everything: 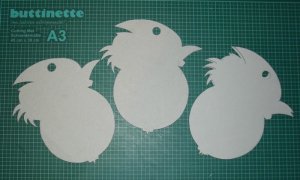 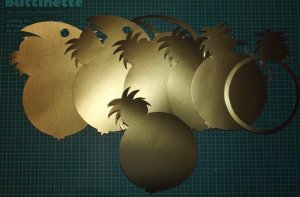 As you can see the two background layers at the left feature a different shine. This was due to a little mishap: I accidentally used the stencil on the wrong side of the card. Since I didn't know at that point if I had enough gold card for all three goodies I decided to use this mistake as an advantage and to build a mirrored medal. The Prince would get the correct one, the Princess the mirrored one. Right following the motto: 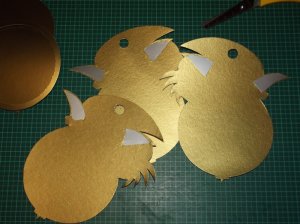 Some silver card (= leftover pieces from the Cylon sword) was glued to the back of the triangular holes in layers A & B. The circular hole is for the chain. Front view of A: 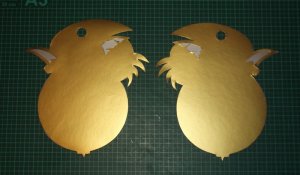 B glued on top of A: 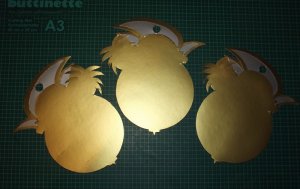 You see a few dents in the left medal. These areas will be covered up by the next layers.
Reactions: zathros, Rhaven Blaack and ASC Mclaren

A small area below the half circle on top of shape B was traced with an empty ball pen and a ruler (straight concentric lines only). Since I was in a hurry I forgot to take any pics of that but you got the idea.

Layers C & D were glued on top of it. I printed out another sheet which contained lines to align some fan-like parts later. The pattern was cut out and temporarily taped to the surface. Before I did so I checked if the tape could be removed without damaging the gold card. Luckily it could. 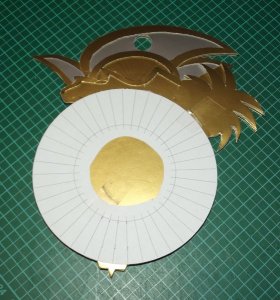 The lines were traced with a pencil and a ruler. 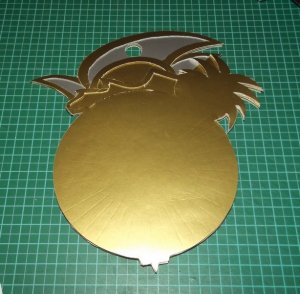 The medals were suppoed to be personalized in order to distinguish them from others and to document the year they were received. To do so I printed some badges, laminated them and glued them to the middle. I used the traced lines on layer D as a guide. 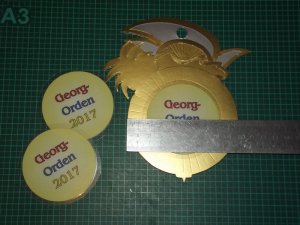 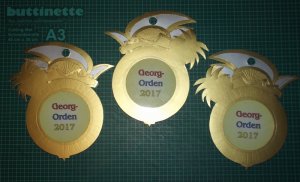 Any wonkiness in the cuts would be covered up later. It was a very forgiving design.
Reactions: zathros, Rhaven Blaack and ASC Mclaren

While test-fitting I noticed that the E layer could be skipped. So I switched to the F layer, embossed a few lines with the sharp end of an old brush and glued it in place. 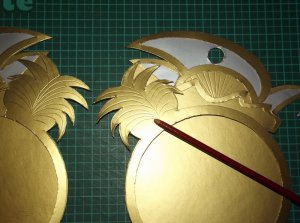 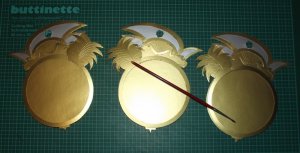 (Note: I traced the F layers and put them on loosely to check the look before I attached the badges, so they are missing in these pictures. )

The E layers were re-used for the fan-like pieces which should be arranged around the center. I therefore created another stencil with concentric lines. I could have traced one single element at a time, traced it and cut it out, but that would have been too much work since I needed the same curvature on each element. So it was easier to make a circle and cut that apart. 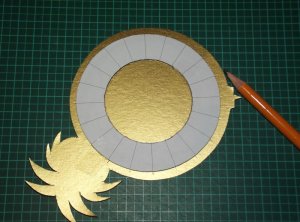 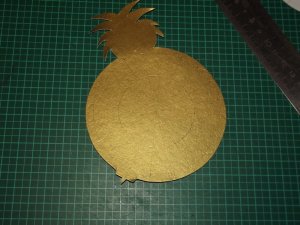 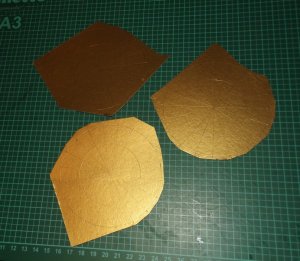 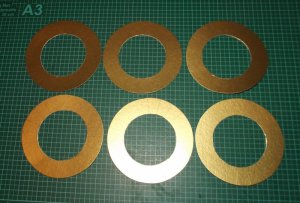 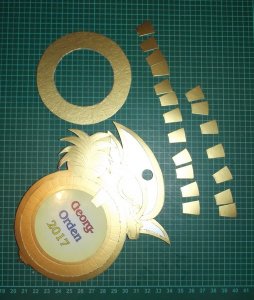 Since the elements were overlapping 50 % of their neighbours I needed two full circles for each medal. 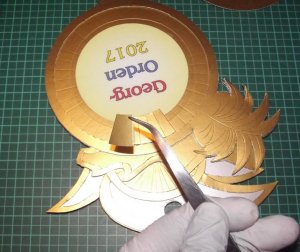 The elements were glued around the perimeter. 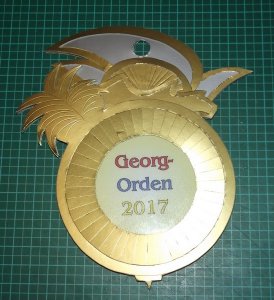 I replaced the dented element at the top later.
Reactions: zathros, Rhaven Blaack and ASC Mclaren

The next element was a little mask. The pattern was traced to silver card, cut out and glued to cardboard for reinforcement. The mask was curved a bit to add a 3D effect. A small cardboard separator was glued to the back to prevent the mask from being flattened again. 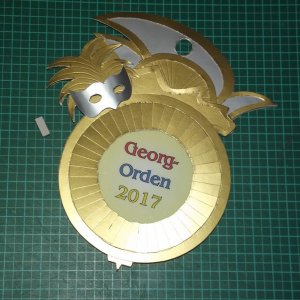 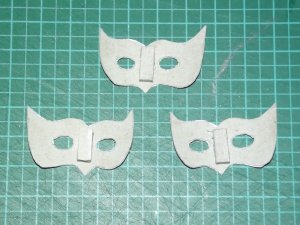 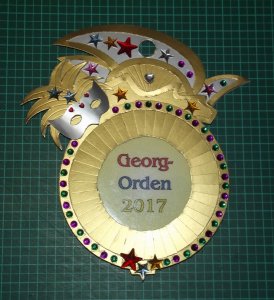 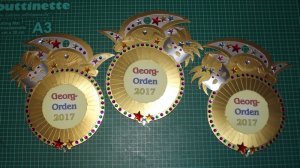 The edges were painted with sparkling gold acrylic colour. Last a ribbon was pulled through the hole (again from the stash). 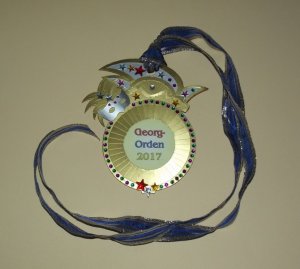 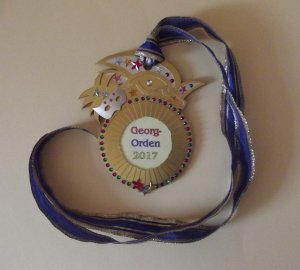 The ribbons were not closed so that the fit could be adjusted. 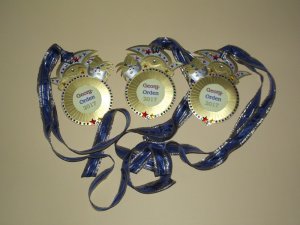 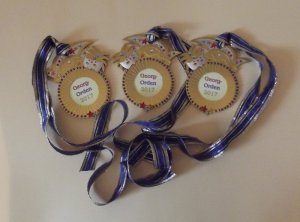 The medals arrived in time and were a huge success. No-one believed that they were made of cardboard and mostly left-over pieces which had been lying around unused in our cupboard for years. My colleagues thought they were carved from wood (the extra cardboard layer between front and back did the trick ). I only needed to buy the self-adhesive red and green glittering stones which were placed around the perimeter. They cost about 5 € - and I still have three full packs of them left (I bought a bit more than I actually needed in order to stock up on our supply for next year ).

On a side note, most of you already know that I like teasing people. This time I played a little joke on my colleagues who were dying to see the finished medals. In best Buster Keaton manner I told them that the medals had been accidentally destroyed when I was about to prepare them for departure. I told them I had knocked over my coffee machine which spilled the coffee all over the medals and thus ruined everything. They were so sorry for me and tried to find some replacement - when I finally revealed the finished work in pristine condition.

We all had a good laugh in the end and a fantastic day.

THANKS FOR WATCHING!
Last edited: Feb 24, 2017
Reactions: bigpetr, ASC Mclaren, zathros and 2 others

These look FANTASTIC!!!
I am certain that your special guests will like these
Reactions: Revell-Fan

These are absolutely beautiful. You are an Artist. I am enchanted by how beautiful they look. You really have all the bases covered my friend!
Reactions: Revell-Fan

I like how you used left over material to make these FANTASTIC medals!
If I received one of these, I would be very proud to display it and not only tell everyone how I received it but as well as say what it is made of!
Reactions: Revell-Fan

Here is another picture in hi-res: 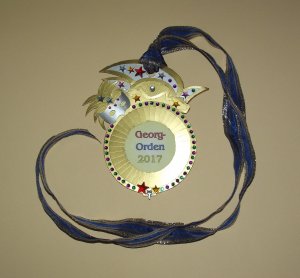 I really wished the light had been better but the weather was so bad those days that I was forced to use the flash.
Reactions: ASC Mclaren and Rhaven Blaack

That is the finest work of it's kind I have ever seen. I don't have superlatives for it. You have broken new ground. You could probably get a lot more commissions if you advertised your abilities. I could see a publisher taking the prototypes and mass producing them. You have a real winner here.
Reactions: Revell-Fan

I'll keep that in mind.