I found and downloaded a very nice looking, yet simple f-14 tomcat. I decided to just go ahead and modify it to make it flyable. I reinforced and strengthen the plane with tissue and added enough paper weight to give it truly admirable gliding path. the wings are fixed in the closed position, but my next project might be giving it a variable wing while still retaining flight capability. possibly even pylons
here are some pics 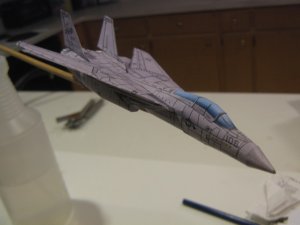 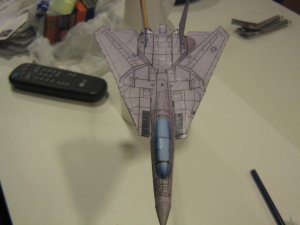 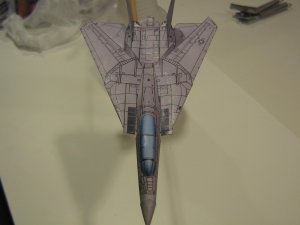 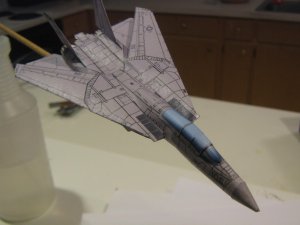 @freddyman I fixed the photos for you so that everyone can see them.

You did a GREAT JOB on the build!!!

In your first post, I was able to fix the photos for you, so that everyone can see them.
I have deleted the second post with the same photos. They did not show up at all.

here are some more photos

Wow! Thanks for fixing the photo issue. Now I can see all of them - and they look great! Fine job! Thank you very much for sharing!

To make the F-14 flyable, with the wings swinging, you will have to have the center of gravity change with the wing position, and it is not linear. it can be done, but a flight of 25 feet is not a successful flight. That will take a lot of work. I would love to see you do it.

the proportions of this plane would have little major effect with a simple swing wing mechanic. if you have the cg centered in a a workable position to allow decent flights in both wing variations, you can accomplish thus task without having to change the cg's position. heres a video of a paper f-14 with swing wings that flies beautifully.

Actually, when the wing are pulled back on that model the center of lift in relation to the center of gravity changes. The difference in flight is evident in the difference of the flight paths, the aircraft does not gain the altitude as it does with the wings extended (the wings folded was for high speed pursuit, and they opened and closed in dog fights to suit what ever was needed). It is not only the center of gravity, but the center of lift that changes in that craft. Also, without seeing how hem made the mechanism to fold the wings, it could be that he worked it out to get manageable flight in both configurations. There's no argument, just the physics of flight. They all come into play when building a glider, and since there is no one in there to correct the flight path, glider inherently demand closer attention to detail, whether by instinct, or gained knowledge, the physics involved are always there.

When I was making a F-20 Tiger Shark looking planes, I made a wing I really liked. I coated the outside with Steel Epoxy Putty, leaving the leading and trailing edge as the separation points. This became a mold. I would tape it closed, then fill with "Great Stuff", (I used a thing layer of Vaseline as a release agent, and coated the inside with shiny tape.. That would be the core of my wings. It made mounting a main spar very easy. The wings were able to take much abuse, I did the same thing with the nose tip, and had actually designed the first 1/4" inch as a replaceable peace. There are tons of things that can be done with this. I think a Gliding model section would be a blast!

Please, I apologize if I came off wrong. I was very excited to see someone making models that flew well, as opposed to another "designers" who's models barely fly. That is why I am so enthused with your work.

well, I'm not aiming for the very best of flying performance of both wing transitions, and I fully understand what you post. but what I'm saying is that you can get a glider with a variable wind design if you have the cg located in a workable place for both transitions.
the plane in the video featured no change or alteration in design with it's wings open other then the center of lift. it was capable of opening the wings with a gear design
I posted a video below on the very same model built by another person. at 1:40, you can see the swing wing mechanics. I'm going for something similar to it.

Freddyman, you and PaperAir have motivated me to form a new forum under Aviation for Gliders. I am moving this forum, and you other one there. Gliders deserve their own spot, they can be hard to make, and loads of fun!! Any material, any style, rubber band powered, electric, or free flight. The sky is the limit!
You must log in or register to reply here.
Share:
Facebook Twitter Reddit Pinterest Tumblr WhatsApp Email Link
Top Bottom