As for non federation ships there are a few that I would like to have as papermodels.
the El-Aurian vessel "Lakul" for one. 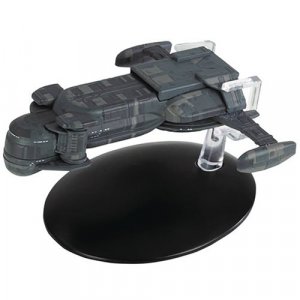 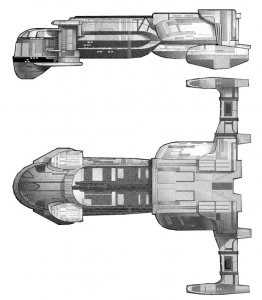 and the Maquis Raider for another 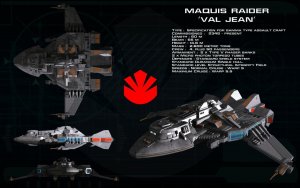 You can't stage a good revolt against the Cardassians, with Maquis raiders.

to Ennder:
the el-Aurian ship looks interesting, to sad i have not most of the Magazines from the Eaglemoss Starship collections!
the Maqius raider didi already but lost the colored fileand have to rework it!

here are my list of ships which i started or have to finish or just have to make the instructions!

Some of the "started" ships are really far in the designing process, but i will finish the old stuff!
Reactions: Revell-Fan and Rhaven Blaack

Those are excellent choices, Sir

Here are some pictures 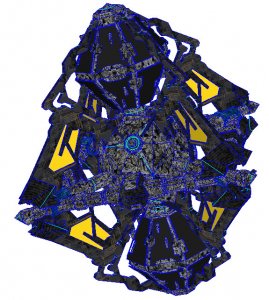 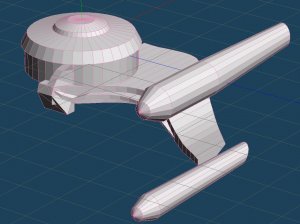 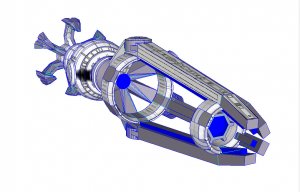 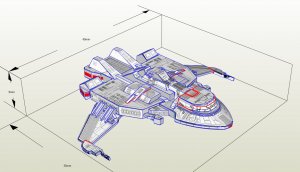 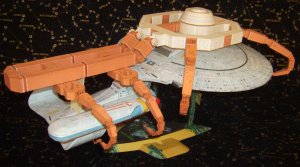 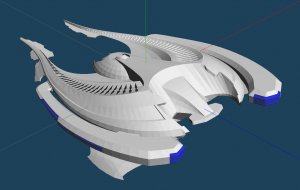 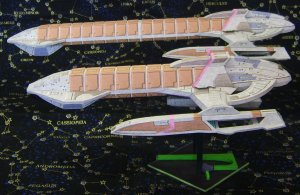 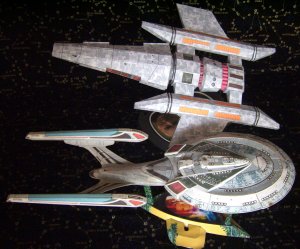 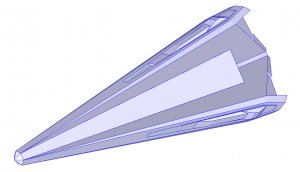 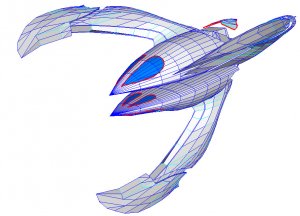 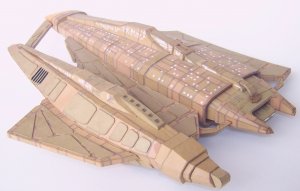 ennder said:
SA9 I hate to say this but,.... that one looks like a cross between the DY series from TOS and the Raven from Voyager. Still a nice ship though.
The one The DC was asking about is this one
Click to expand...

Well, you have a good eye. The ship Spaceagent-9 depicted was actually designed by the same person who created the DY-100. It was a kit planned to be sold for a series sponsored by the company, AMT, that was producing the Star Trek kits in the series and expected to be the laugh of a different series of kits. They had in mind an original space opera storyline that would promote the sale of this and other planned kits, including a little shuttle that rose from a central shuttle bay [also a brilliant Jefferies deign) These plans never evolved for several reasons, including how poorly developed the storyline was.

Called the Leif Ericson, if I recall (I may have the spelling wrong!), it was designed by Matt Jefferies; a brilliant visionary who also created the original NCC-1701 Enterprise. Jefferies was not a typical futurist, he was a creative design er who was well schooled in aviation technology and aerospace science. He originally was commissioned for its design for the promotion of a series of models, since the Star Trek Series had a limited number of designs for AMT; the company who owned the rights to sell Trek plastic kits. What he did was to use some early concept drawings from star Trek designs, as he had felt the look was clever and futuristic, even if Roddenberry had rejected its inclusion as a starship. The design was almost included in Star Trek the Animated Series but never made it past planning stages of storyboarding. I can't remember which episode I was told it had bene planned for use.

Never the less, the design is strongly linked to Star Trek, even though it never appeared in an episode. This is partly because the designer was common to the series and the kit, but more often because anyone growing up in the 60s-70s who built Star Trek model kits produced by AMT was familiar with its image, as it appeared in promotional material and on the side of Star Trek kits. It was produced as an Interplanetary UFO vessel, later, after the Leif Ericsson series flopped, and made into a well remembered a glow in the dark kit. If you built those early Trek models, it was always sandwiched into those promotional pictures of other kits available in the Star Trek line...even though it wasn't ever officially Star Trek material.

Its use in the fan made film Lolani was a love letter to its history and association with Star Trek fandom, as well as a nod to Matt Jefferies. He loved nautical designs and foresaw a future where vessels would have hulls not dissimilar, whether in space of at sea. His vision of space vessels, when advanced, would not be the current zeitgeist of heavy grebes along the hulls, but of smooth surfaces where sensitive equipment would be contained behind protective ceramic and ploy-mix protective coatings. Ships designed to enter, or skim, atmospheres would have more integrity if they didn't have obstructions that would encourage atmosphere drag and create hull heating.

Its a artistic approach not currently favored in Sci-Fi but it makes a lot of sense in advanced technology. Why expose vulnerable equipment to radiations or other hazards unless the equipment, like sensor domes, were needed to project the efficacy of the technology? Never the less, just as smooth saucer shapes once dominated the creative expectations of viewers, not heavy detailing chases this younger imaginations. It will likely swing back around again as our technology changes.

By the way; the images that Spaceagent-9 shared are actually modifications of the original Ericson-design. The original ship had no engines at the end of the wing-foils [see below].

Its a beautiful ship, I agree, and though not ever actually a Star Trek ship, it is a part of plastic modeling history, and a sidebar to Trek fandom.

By the way; nice image of the Orion Interceptor. Is that the Eaglemoss version? I don't have that one. That's the ship I suggested, but I can see why the Ericson/UFO has merit too.

D-WHALE said:
Here are some pictures
Click to expand...

Did you recover the McKinnley?
View attachment 184574


And find the lost Marquis Raider that you used to make the Yeager...


I thought these and the Ferengi Maurader you made were destroyed in a drive crash? Did you recover them or redesign?


and an alternate Tholian!

Yes, a salute to Matt Jefferies who designed the Martian war machine for the Pal movie and many others. He designed the Klingon D7 and other ships in TOS. green and red were his power emitter colors for some reason. he also worked on a lot of early 1970's movies and tv shows, It's a little hard to track down which ones as there are hardly any accredited interviews.
I really enjoy D-Whales models and look forward to his releases!

spaceagent-9 said:
Yes, a salute to Matt Jefferies who designed the Martian war machine for the Pal movie and many others. He designed the Klingon D7 and other ships in TOS. green and red were his power emitter colors for some reason. he also worked on a lot of early 1970's movies and tv shows, It's a little hard to track down which ones as there are hardly any accredited interviews.
I really enjoy D-Whales models and look forward to his releases!
Click to expand...

Me too. I've been pestering him over the Marquis and Yeager for a while. I know he's tired of me scratching at the door!

The UFO would be a great kit. Someone sent me an unfinished file of parts, but I never got anything out of it. Maybe I could pass it on?

lol! That was probably me! I have all kinds of unfinished projects of mine, and others!

@D-WHALE : McKinley station and the Tamarian vessel for me, please! The latter was seen throughout the various ST shows in different decors, so that would be a dream for recolours / variants - just sayin'!
Reactions: spaceagent-9

Haha funny! different people, different choices I wonder that no one voted for the Borg diamond???

@Marcell
The Tamarian is on my next list to finish! it was for me a big reason to create this, that this was modified for other races! dont forget that i already released the Talarian, what i also release as a 3D-Printer version:

Talarian observation craft is from the TNG episode "Suddenly Human". the model is in scale 1/1400, a "real" length of 150 meter was the reference! if you print it, take the single parts! the completed model is just to assemble the parts! part 1 can you print without support, but then lay it...

I could after years recover some files from the Harddisk, as an example the PDO file of the Maquis and my final sheets of the Marauder! the final textured files of the Maquis and the instructions of the Marauder are still lost!
The McKinley, Karemma, Vidiian, Borg Diamond and Tamarian/Talarian are on a new stick!
The Sona is a modified Printer model from Thingiverse! it had a lot of intersections, but it is worth enough to change!

But all in all i must say again: Job and Family first! Also in the corona lockdown i did my job! I create and produced some Faceshields!
take a look (in german):

I remembered those dark days of HD torture. I remember that you took a Marquis and "Yeagered" it before the crash! It looked good.

If it would help, I have an Eaglemoss copy of the Marquis ship and can hunt down a Marauder, if that would help, to get the Drexler scans.

I don't know of any McKinley plates, nor of the Tamarian.

I am guessing that the Borg Diamond didn't draw many calls was because Voyager really damaged them as a storytelling element. The Borg were always most interesting when they were more aliens in motives and manner; when still in Cubes!

Wasn't it more interesting when the Borg "squared" off against Ent-D?


BTW: do you like the alternate Jefferies design in the UFO?

THE DC said:
If it would help, I have an Eaglemoss copy of the Marquis ship ...
Click to expand...

I have something what is much better: the original biuld instructions from Revell/Monogram as a PDF with a highquality vectorized top and bottom view!!! :O

i found good pictures of the original studio model and made the texture with this! Pssssst.. i give you a sneak peak 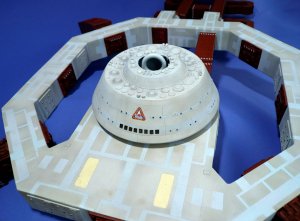 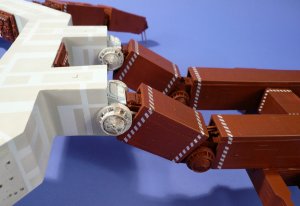 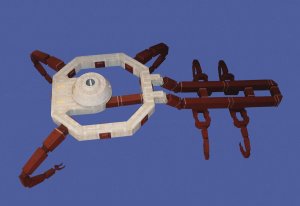 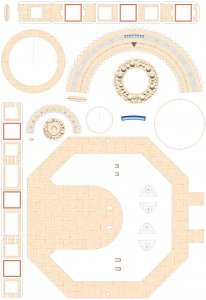 THE DC said:
BTW: do you like the alternate Jefferies design in the UFO?
Click to expand...

Went to printNcut your Vorcha and my printer was out of ink,

When I get some this week, I will use my new cricut to cut all those little greebles.
Reactions: D-WHALE

I think this is in fact the correct translation. Klingons used to be great and avid writers and obviously needed LOTS OF ink in the process. Remember the mass of pieces translated by Shakespeare.
Reactions: spaceagent-9

Translated? Shakespeare was a Klingon, I am told...

"Bleed no more lines, my heart. This knife, my pen, This blood, my ink, hath writ enough to lust."
Reactions: Revell-Fan

THE DC said:
Translated? Shakespeare was a Klingon, I am told...

"Bleed no more lines, my heart. This knife, my pen, This blood, my ink, hath writ enough to lust."
Click to expand...

That quote reminds me of another:


Which leads to this conclusion: Predator IS Klingon poetry!