I was driving to work, when they broke into the G, Gordon Liddy show that the first plane had hit, went into the bosses office at work, we talked about how it was no big deal, planes had hit skyscrapers in NY before. Then saw the second plane hit the other tower on CNN. Not a lot of plumbing work got done that day...

2.977 souls were taken on that day, many more have died since, either as a direct effect of the attacks, or in the series of "Wars" since then.
I harbor no ill will toward anyone, but I will say, the response to these attacks should have been swift and earth shattering. Instead, we let the ones responsible get away for too long, and let thier hate spread. Now, we will never be rid of thier hatred of us, unless we are willing to die, almost man for man.

Let us never forget, let us always remember those we lost.
Reactions: Rhaven Blaack and Revell-Fan

So say we all.
Reactions: micahrogers

I have not forgotten, nor will I ever forget.
Reactions: micahrogers

I happened to be watching T.V. that morning, and the news flashed that a plane crash into one of the Twin Towers. I was shocked, as I am sure everyone was. That was back when I was flying. When I saw the second plane, I thought, "That plane should not be in that airspace" and watched it collide. That is permanently ingrained in my mind.

These people were murdered. I believe that too many countries got away with literally committing this murder. Russia built a beautiful memorial for us, a big one, and the news did not even cover it. It sits across the Hudson, in New Jersey. Yet we vilified the wrong people, and still let these monsters destroy countries in that part of the world, and they still are. We need change in our government and we need to come together as a nation. "Don't Tread On Me" should be flown beneath our flag. This is not a war of faiths, it is a war against thugs and monsters, hiding behind a faith, and those people suffering the most. They are terrorized everyday, and their children have no futures. There can never be any kind of peace till ISIS, Al Qaeda, and the rest of the like minded groups are wiped off the face of this planet. I think people would be surprised how many other countries would join a coalition for such a cause. We don't have leaders though, we have politicians and business men/women posing as our leaders.

Vote they that do nothing, or a a hindrance, the party of "no" out, all out, every last one of them, regardless of political affiliation, as they are on both sides of the aisle. Then, maybe, we can finish avenging the murdered innocence. VOTE!!

A tear, a gift from Russia, the land purchased and the memorial constructed by Russia. They warned us,and nobody listened. 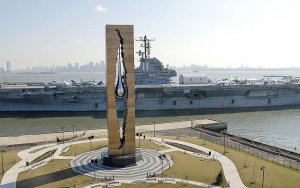