While are waiting for my Thunderhawk thread be reactivated I'd like to present the few scratchbuilts it's been my obsession to produce over the past eight years.

First in line is the jewel in the crown, my Warlord Titan whom I call Luteus Vexant which loosely translates to 'Dirty Harry' depending on what Latin translator you employ anyway here he is:

He is made almost entirely out of 'Evergreen styrene plasticard and some hardware and all his joints are movable so he can be posed in virtually any position that is SFW. 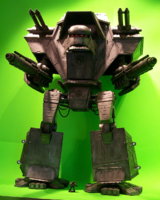 Luteus has a complete interior that consists of five decks:

He is in the process of being fully mood lighted and will have a crew of about eight at least. 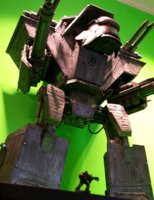 The is masterful. I'm not sure I've seen anything this clean, and believable. Incredible. Super workmanship!!
Reactions: cg admin

This is a PHENOMENAL model on many levels!
I am AMAZED by the complexity and professional detail that you have put into this model!
KUDOS TO YOU ON A FINE JOB WELL DONE!!!
Reactions: cg admin

Thanks for the replies to both Zathros and Rhaven Black, I was in the process of editing a new post when you responded to my thread.........

This first image shows some of the modular construction of the model which makes it easier to paint, repair, and upgrade. The catwalks in the foreground attach under the shoulder carapaces. The head and neck unplug for the torso which I intent to make into an escape pod as I believe the Warlord does employ such a device. I'll demonstrate the head and neck movement capabilities in a later post. Speaking of painting, what is seen here is aluminum powder rubbed into flat black spray paint. I did this as an experiment a year ago and have handled the model almost daily with none of the powder coming off and the oils in my skin impart a patina to the finish. I eventually would like to highlight the surface with copper powder as well to emulate the Space Marine Invictus Warlord

This next shot shows the cockpit interior, the flat screen display beside the pilots feet actually belong in the helmet piece and I didn't realize it had dislodged until after the image was posted

The next shot is a rear view of the interior Command deck looking forward into the corridor leading to the cockpit:

Above the blast doors is the Tech Priest's altar and the upper side galleries railing can be seen as well in this image. The lighting incidentally is from the onboard LEDs I installed to illuminate the interior

On either side of the altar are the emblems of College Titanica left and Adeptus Mechanicus on the right.

Pardon the construction dust in these images as I was taking the photos as I was working on the model.

In the final shot a bit of whimsy. I feel the Warlord should have the capability of defensive small arms fire so I built a Platform in front of the lower engineering bay for the crew to man bolters & etc. to defend the behemoth from ground personnel up to no good.

The railing you see in the doorway is the catwalk around the fusion reactor.
Last edited: Mar 14, 2016
Reactions: Sanginus, bgt01 and zathros

I like the modular way you construct. This gives you the ability to modify, basically, your options become unlimited. You can make damaged pieces, to depict combat, anything. That is really cool.

Thank you for your reply, unfortunately as the titan weighs in excess of 7 kilos creating damaged parts is not a problem. Due to the flexible joints and lack of a stabilizing base Luteus has taken more than a few tumbles that necessitated repair but more on that later....

On the subject of flexible joints now might be an appropriate time to demonstrate the posing aspects of the construction. While theoretically Luteus has a lot of possible posing positions his weight and the necessity of maintaining a center of balance prevents extreme positions. In this next series of images he demonstrates subtle changes that can be missed by the casual observer:

In this first image BTW in his basic primed state, Luteus in his most stable stance:

This next image is almost the same as the first but he's looking toward the camera.

Luteus looking down and aiming at the foreground trenches, I should have put troops in those trenches....

Next Luteus in profile in a typical striding stance.

Knees straight and feet apart in the stable position again.

Finally the back view

The fact that this is both modular and articulated is AMAZING! The finite detail is beyond SPECTACULAR!
I am COMPLETELY BLOWN AWAY!!!

Dude, you could make stop go animation sequences that would unreal!!
M

Yup, This is fantastic talent and imagination at it's finest, really superb!

Thank you for all the replies, I hope to make these threads more than just a showing of "Look what I did " but an interaction of questions and answers on the making of these models. Fortunately I have keep hundreds of production notes and images to draw on so any question can be readily answered with words and pictures for instance you may note that a lot of the detail on Luteus comes from the GW "Cities of Death" models but where a lot of scratch modelers use these parts but they don't modify them to make a believable construction such as tapering to the waist.

Note by shaving off the bas relief from the Manufactorium section you can generate a lot of usable detail to enhance your model rather than just gluing the rectangular pieces together.... 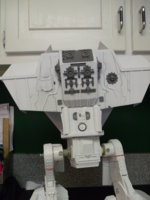 That may work well for a static building but a vehicle such as a Warlord needs to look dynamic. By subtly tapering the components it makes the structure more pleasing to the eye.

The above image was from about two years ago when I was just fleshing out the waist and pelvic block.

Below is a group portrait of five of my constructs in various stages of completion....

The two tanks and the Warhound are some of my earliest works.
Reactions: Sanginus, Rhaven Blaack and JanMarciniak