What was everyone's very first paper model, and, is it still available?

Mine was the FIFA World Cup trophy from paper-replika, first built for a work function in 2010. Hooked since then
Reactions: Revell-Fan, daishi and Rhaven Blaack
B 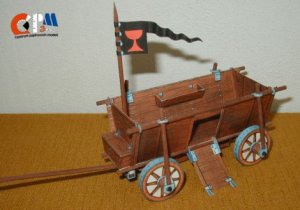 I started scratch building paper/cardstock models when I was 13 (that was back in 1981). It was a Colonial Viper that I made from cigarette cartons. I used a photo of a Viper that was in a picture book of Battlestar Galactica.
The first paper/cardstock model that I built that was a kit (in 2009), was the Buck Rogers Thunder Fighter designed be @Martin Saenger (This is also when I joined Zealot). My first time of building it, it turned out to look like a "dogs dinner" (I no longer have it). Once I was able to figure things out, (as everyone here know), it has become one of my favorite models to build (and to help others build).
Reactions: Revell-Fan, daishi and Cybergrinder

One was a Lotus race car something like this:
I remember the same parts, so it was this template for sure, but probably a cheap Eastern European copy, the yellow was a darkish brown/beige, the car itself was a really dark black instead of the dark grey I see on this video, with wide white fold lines.
I actually had 2 of those the first turned out quite bad lots of cracked edges because I did not score, and it was cardboard basically. I think that was the first model I've built (around 1991). The second I've probably built closer to 2000, turned out much better, but I don't have any pictures, nor the models.

I also had an IFA W50 ladder fire truck, I remember that was made from "normal" paper (probably around 160-200gsm) I could barely find a pic of an actual truck so no model pic sorry The model had no cockpit, and the ladders were 1 big box only. 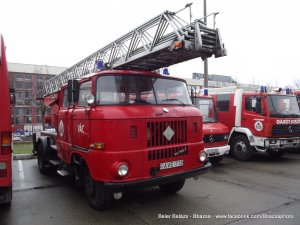 But I started to build "seriously" during university about 10 years ago ...
Reactions: Revell-Fan, Cybergrinder and Rhaven Blaack

My first paper model was - a life-size Cylon Centurion helmet! I built it at the age of 6 or 7 when I was watching BSG and Buck on Dutch TV. We had a very bad reception at my home, the picture and sound was full of static and noise, so I went to my grandparents who happen to live next door but who had a much better picture and sound. My grandfather even sacrificed the evening news for me to watch BSG. Galactica came every Sunday eve at 7.15 PM (right after "het fabeltjeskrant", a short animated good night story for kids that ended with the words "slaap lekker" ), Buck aired every Saturday eve about 4.30 PM. I even recorded some episodes by holding a tape recorder before the speakers, but only sound effects and music: We all did not understand a word because the shows were in English with Dutch subtitles. I was so glad when I had my first English lesson at school a few years later. In fact, my love for these shows persuaded me to learn English.

The model was pretty simple and looked about like this: 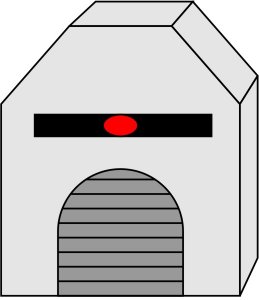 The bottom was open to put my head through, the texture was painted on with black and red markers. The base was a simple sheet of cardboad from the hobby shop. Since I was pretty inexperienced with paper modeling the helmet was pretty basic and "edgy" as you can see. It was fairly flimsy, too, because it consisted of only one layer and thus did not stand the test of time. In addition it was pretty difficult to see with that thing on because I did not cut in any holes for the eyes - the Cylons did not have any holes in their heads either, at least you were unable to see any on screen. I wore it a few times to scare my grandmother but somehow she always knew it was me.

My first serious attempts at card modeling came a few years later when a partwork called "Project X" was introduced by Marshall Cavendish. I religiously collected it. It was a cool mix of "Natural Geographic" and "Science" magazine for kids and teens and increased my knowledge tremendously. Actually, there were several infos in it which I used to render my teachers speechless. The mag was issued every two weeks. Each package came with 24 pages of higly condensed infos, a science poster and a card model. Everything was themed and followed one special topic, like mechanics, space and aeronautics, weather phenomena, nature and physics. Two of the most cherished models were the Voyager II space probe on a concave background plate with a 2.5 D rendition of Jupiter and its moons giving the viewer the illusion that the model and background was moving when the viewer moved around the model (a primitive but effective variation of the Yoda with moving eyes "tech") and a sophisticated working sun clock with latitudinal and longitudinal movement. Unfortunately both models were destroyed in a move but I still have all issues today. The way Jupiter was shown inspired the stand for Andy Probert's triangle ship, BTW. The sun clock issue pops up on occasion on Google search, so I may get this one again one day.

My first "professionally built" model was - of course - Martin Saenger's Thunderfighter. And with this model my papercrafting career began: I joined Zealot, met RB, started to make my own models, got permanently hit by RB's whip to make cockpit interiors and such, ...
Last edited: Dec 31, 2019
Reactions: Cybergrinder and Rhaven Blaack

Here are photos of the Viper and Thunder Fighter that I scratch built while I was in Eastern Europe just before I discovered both this WONDERFUL forum and www.paperaviation.de. 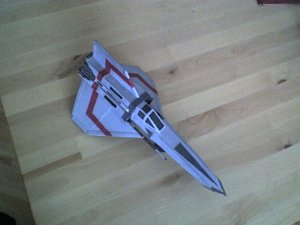 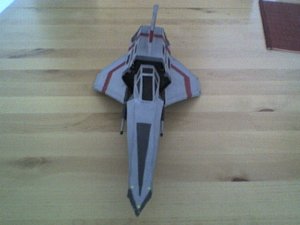 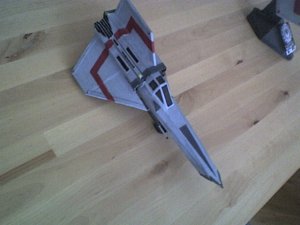 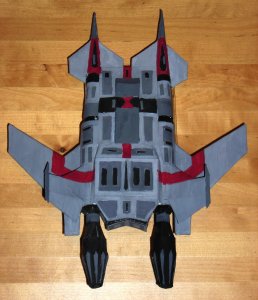 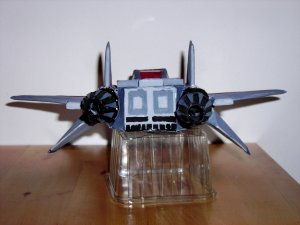 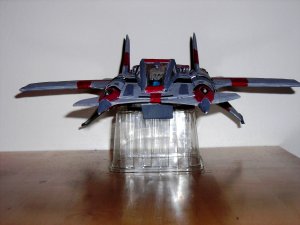 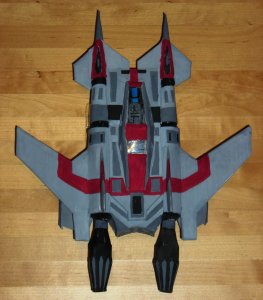 Unfortunately, I no longer have these models anymore.
Reactions: zathros, Revell-Fan, ASC Mclaren and 1 other person

Did a lot of Plastic in the 60's, and 3d sculpting and carving over the years. Balsa Airplanes every once and a while, but found the Austin_Putilov 1/43. Here is my VERY FIRST serious model...did a few Cube-Heads before this...and some goofy stuff, but really worked on this... 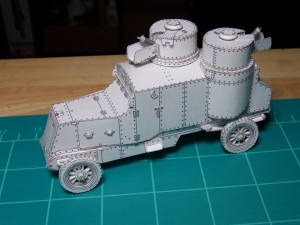 first greebles for adding movement to the turrets and guns...wheels came out like S**T...

...I got the bug and then did my second model... a PN1.5 trailer ( spent a lot of time studying model builds and tutorials...and went all out... 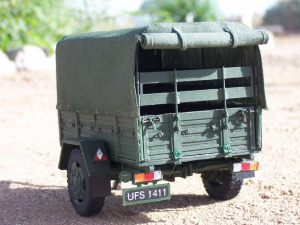 If I could just not have to do all the 3d stuff, I might find the time to get some stuff done...
Reactions: Cybergrinder, zathros and Rhaven Blaack

BTW, I remember making dozens of small origami cranes with my mom when I was little. The sophisticated ones with flapping wings. We put a string on each one of them and arranged them in one giant "flock ball". It was said that a flock of 1000 cranes would bring you luck. We did not manage to do that amount of birds and thought, 100 would do.
Reactions: Gandolf50 and Rhaven Blaack

We had a lot of Vinyl records, and it seemed that no one ever put them back in their vinyls sleeves. Needless to say, I had a lot of high quality card stock available. The first all paper model I build was the Space Chariot from "Lost In Space". I had to "have me one of those".

I was a late 7 years old, and 7th of a family of 8, so I was left to my own means as my younger sister got all the attention, and me, well, I was just there. My younger sister and are are the closest people in my family.

My Mom was a seamstress, we had an apartment full of industrial sewing machines, some had 8 curved needles (Merrow Machines), and she had scissors so sharp and strong, you could just cut you finger off if it happened to be in the way. They were all marked "SWISS" on them, and she had them professionally sharpened.

They cut through that cardboard like you were cutting through tissue paper. I only realized how good they were when one time I tried a pair of "meh" scissors, and had to use two hands to cut. Making the frame was straight forward, but the glass, and the corners, all compound curves, was going to be a problem. The tracks seemed easy, straight pins,cut to length, bend the points 90 degrees for links, the head of the pins on the outside, and making the tracks seemed to me to just be a matter of looking through our encyclopedia and seeing 'Dat be how day do dat".

I made the seats, all the inside parts, and back then,, the early '60's", blister pack plastic was everywhere. We had an electric stove which was very handing for bending the plastic corners nicely, consisten low, but hot enough heat. The corners of the chassis was the first time I ever "water formed" paper. I finished the model, the bogey wheels, and tracks actually worked, I counted the number of links, and eyeballed the size. My Mom had pins with round heads on them all different colors, so I used them for control levers and knobs, not having any idea of what anything did. My older brother gave me a can of Silver Spray paint, he was a plastic model builder, and I have to admit, he expressed no interest in what i was doing. i finished the model, and played with it for around a week, then showed it to a friend of mine who lived on the 4th floor of the apartment building we lived in. An extremely multiracial tenament 16 building complex which eventually turned into a Ghetto, and is no longer there (Thank God).

This kid's Mom purchased him two plastic models every week. She was a single Mom and so afraid of him going out, that she kept him busy inside. He wanted that chariot, and wanted it bad. He offered me a "Big Daddy Rat Fink" model, painted perfectly, and the deal was made. My Mom marched me back up, feeling I may have ripped the kid off, as she knew the cost of models, and my friend's Mom called her son and said" Did you trade models with you friend?", and he said "Yes Momma", and she said if I had permission from my mother, then she was fine with anything we shared, deal done. We were friends for around a half year when she decided she was moving out of the complex, as she saw the writing on the wall, I heard her talking with my friend's Mom.
I have no idea of what his name is now, though I remember his face. My slightly older brother said, "You got taken", you Chariot was way better than that ugly weird model (he just didn't understand "Rat Fink". I told my brother, "No I didn't, I'm making another Chariot", which I did, and that one came out much better.

I won't count the 100's of gliders, as tossing them a very high 3rd floor, they would catch the wind, and I would never see them again.