And here I was just getting ready to open a "bus fetish thread".

Wonder what happened to all the traction fellows in this thread?:ass-kicking:

Getting back to traction in this thread (as those bus nuts have their own thread now), a few comments on the Eheim/Brawa powered trolleybuses is in order. These were first made in the early 60's by Eheim and had very large and bulky overhead that was stiff, rectangular, and hard to bend to curves. A platform at the front of the motor units held the two poles which also steered the bus; the poles had roller wheels at the top and ears to help keep them on the overhead.. The motor was large and bulky taking up most of the rear of the bus. Two incandescent bulbs in the front for headlights and one in the rear for taillights. A lot of heat was generated in the power units. To hold down costs the buses were made of a low melting point plastic, cellulose acetate, and used cheaper to make aluminum molds. Unfortunately this material easily warped from all the heat. Any bus run continuously for even short periods would show this warping (and sagging of the body). Prime examples of such deterioration can be seen in some units on ebay. Even the trailer units with a single bulb for taillights could also warp. Eheim offered a 2-axle standard bus, a full size non-powered trailer, a 3-axle tour bus and a luggage trailer.

Brawa took over the line in the late 60's and modernized it with much smaller (still over-sized as to scale) round wire and slimmer poles to hold the overhead. They eliminated the rooftop platform for the poles; each pole had it's own slot in the roof. They used over-sized slider shoes at the end of the poles rather than roller wheels - much smoother electrical pickup too. A much smaller motor and gear train powered the unit. Only one incandescent bulb in the front lighted the headlights via a y-shaped piece of clear plastic. This helped but still you couldn't run them continuously like you could the train locomotives. These buses were one of the easiest ways to add more animation to your layout. Both systems offered parts to add versatility to a layout with 90 degree crossings, power switches (diverging routes) and trailing points (merging routes), plus a 90 degree crossing for crossing an electrified train route. Also available were "contact masts" where a bus could send a pulse to operate switches automatically. Brawa offered the same two buses as Eheim and added a fairly modern articulated bus to the available items.

My own interest came from the streetcars and trolleybuses in my own city that I saw daily. My model fleet looks large; but, remember, I've been at it for over 50 years of collecting and running. Not shown are a couple of buses hidden in boxes I could not locate nor extra parts I have from units scavenged for parts over the years. Once I converted a bus to run on slot track (to put the poles in their proper place) still drawing power from the overhead but I abandoned this idea as it looked ridiculous on the sharp slot track curves and slot track itself looked very unrealistic in the extreme not fitting the streets very well. The Faller Car System looks like the best answer so far in moving the poles to their proper place and still operating from the overhead wires for power. 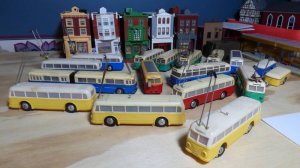 Above: The fleet posing in mass showing 12 power units, two full size trailers, and two luggage trailers. For years the tops were white, cream or occasionally beige. The bottoms were always red, blue, green or yellow. As everything comes apart easily many have repainted units in various company colors. Recently I did run across a unit with grey bottom and bought it off eBay. Below: Closeups of the 3-axle unit with luggage trailer and the articulated unit.

This unit was an over the road tour type bus (never a trolleybus) but it was still popular for adding variety to the fleet. Notice the slight sag in the roof over the rear axles and the warping of the clear window insert. Even the luggage trailer shows some warping from the bulb for the taillights. It is of a Henschel prototype as is the articulated unit shown below in the next photo. 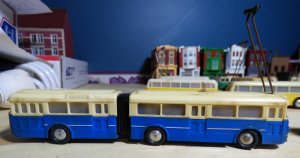 Some transparencies exist of earlier layouts with a trolleybus route but I have to find them among thousands of slides and turn them into photos for digitizing at some later date. As usual, more to follow about my various trolleybus experiments.

Here is a photo of the real Dayton 110 trolleybus which I hope to make my model resemble it as close as possible. There are some fold down steps by the rear door to get to the roof. They would be half the size of those very small retrievers in HO scale and I doubt anyone makes them; but, I'll look around.

I bet I can find a photo of the actual Edmonton unit too.
Put more trolleybuses in your diorama, Swamp Daddy 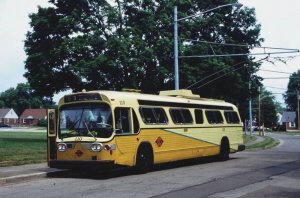 Now, that I've found HO scale retrievers, I am looking for the "steps" that fold out on the side of the trolleybus or streetcar that allow access to the roof. Anyone seen these in HO scale. I am hopeful of finding them to complete my two Busch GMC trolleybus models in HO scale.

I remember going to Philadelhia in 1972, and seeing more trolley buses than I could imagine. That city looked so ancient. I wish I had taken pictures, it is so different now.

Here is a photo of the real 158, an Edmonton trolleybus. 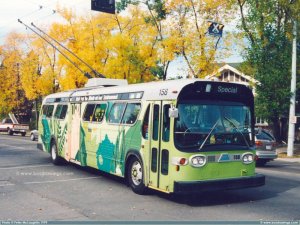