So with my son (and myself) becoming Max Verstappen supporters during the past year, I've decided to park the Enterprise project for a bit and build us Max's and Checco's RB16B.

So off we go with the floor 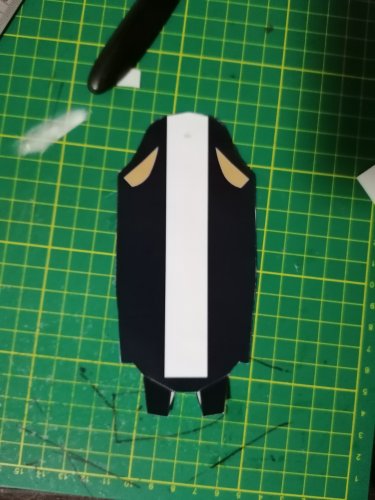 I'll support Max when he wins a race legitimately. FIA has tarnished his so call win, all things being equal he would not have won. F1 has been destroyed by politics. Max better behave, he's close to being banned, 3 points left out of 10.

These F1 cars can really come out nice, no matter what the livery. Some liveries just look bettter than others. If looks mattered!

I'm on the other side of the camp Zathros. Yes, the last race is mired in controversy, but Lewis played dirty and was shown favouritism by the FIA/stewards (Silverstone in particular), and his cry-baby antics irritated me to no end! I think the right man won the championship, when the entire season is looked at.

Ah, that's who Max Verstappen is. This should be an interesting build.
Reactions: Cybergrinder

He had me thinking about my Georgia Bulldogs, who just won the NCAA championship last night.

But good luck with the build. I used to race 1/10th scale RC F1 cars... I miss that stuff, but it just got too damn expensive for me.
Reactions: Awry_Chaos

Hamilton had that race in his pocket. It's not Verstappen's fault that the most horrendous, nothing to do with personalities restart eas done. Placing Verstappen next to Hamilton and letting the 4 cars go by without Verstappen having to overtake them, and pitting Verstappen next to Hamilton was one of the wosrtcalls in thehistory of the sport. I do not have favorites in F1. I watch the race to see who will win. You brought up old races, yet it's Verstappen who is 3 points for his bullying agressive driving technique.

I am an Indy fan. Its setup better, none of this Eorotrash political bullshit. Faster courses, races where cars don't pile up doing 35 mph incertain corners. I have never been the kind of petson who is i to celebrity worship. Thatcomes after thier racing has come to an end, then the greatones can be sorted out. Hamilton was robbed of his title. He has enough money to start his own Indy Racing Team, and what F1 driver wouldn't want to race the Indy 500? The cap on spending on Indy Racing is mmuch lower. With MacLaren now ofgicially in, cand no political governing party, no power steering, who k ows? If the tables were turned, I'd say the race was stolen from Verstappen. Face it, Verstappen's whole racing history will be tarnished by a non deserved technical win. Millions feel the same way.

For my part, I'm done with F1. Races are too short, no refueling, power steering and too many ridiculous rules. Also, some companies put far too much money into their team, ( i.e. Mercedes Benz).It's not a level racing field and is politically motivated. F1 has become Racingfotainment. IMHO
.

Except Schumacher made F1 a bit boring, as did Lewis when the same guy wins all the time....
Reactions: zathros and Revell-Fan

(That's exactly what I meant..!

This is true of any competition. Maybe it's bias on my part but I don't really care much about millionaires complaining about anything.

And back to the real topic of discussion

I started with the rear suspension, pictured below

Then I realised that it attaches in certain points on the main body of the car, so decided to get the main body done. Here's the cockpit and nose section 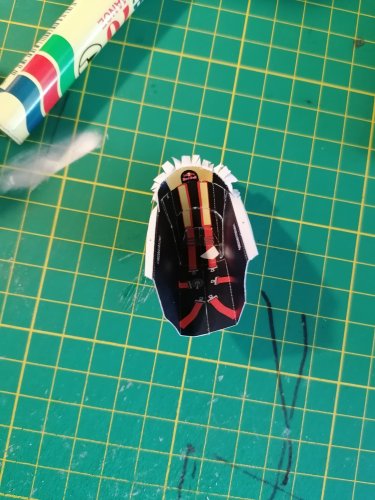 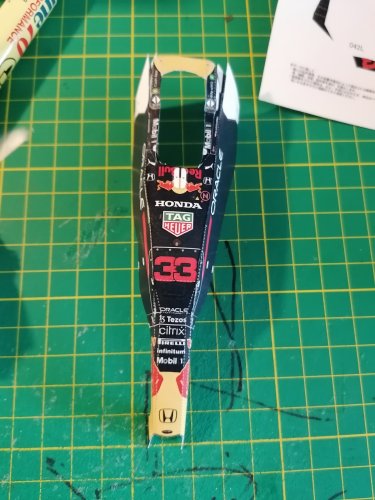 And the cockpit attached 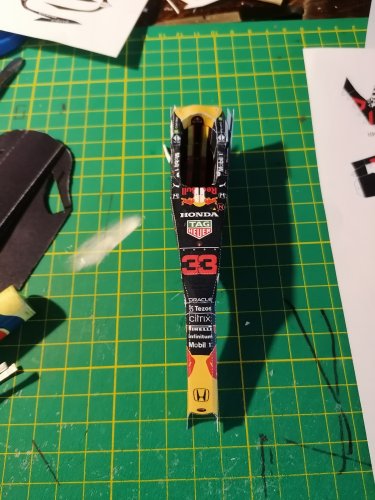 Lookin good! Love it so far.
Reactions: Awry_Chaos and Cybergrinder

Looking good. The shape is holding. That's where a lot of these models fail. It could be lack of internal support. Nice!
Reactions: Awry_Chaos

zathros said:
Looking good. The shape is holding. That's where a lot of these models fail. It could be lack of internal support. Nice!
Click to expand...

I would think these type of models would need the internal formers or some type of internal support system.
Reactions: Cybergrinder

Now we have the engine cover complete and attached. As you can see it's distorted a bit while gluing. 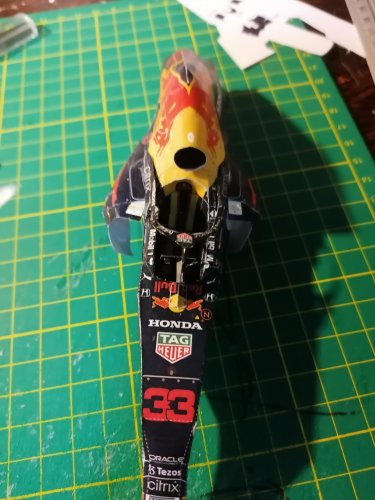 My solution to cut out the "island" of the floor, which (hopefully) will pull the body into shape 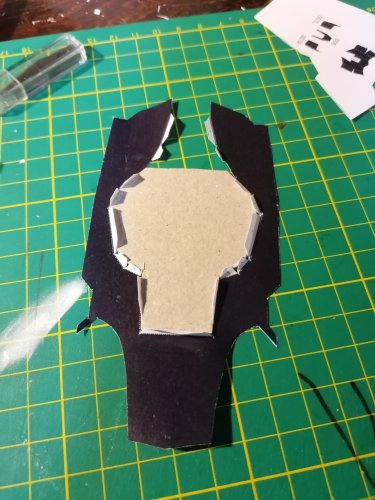 Looks verry cool, smart to use some inner supports.
Reactions: Cybergrinder and Awry_Chaos

Looking good! hope it straightens out.
Reactions: Cybergrinder and Awry_Chaos

The warp turned out to be worse than I thought, and now the intakes are skew.