I've noticed several spambots signing up and posting in the introductions forum. Adding a simple question & answer to the registration form may help prevent it.
Reactions: zathros

Vigilant members like yourself are the best thing going. You put your money were your mouth is. Thanks! !
Reactions: Revell-Fan

I just reported two of them.

I killed them. I'd do it again too.
Reactions: DEADMAN2012 and Revell-Fan

Tis the season for SPAM!!!
Thank you all for keeping an eye out for such.

Got three more of them! HASTA LA VISTA, BABIES!

Unfortunately, this is an ongoing problem that is cyclical.
On behalf of the staff here at Zealot, I would like to THANK all of you who are taking the time to report these spammers. Please continue to do so. Granted, we do have a good group of guys that are doing what they can to stay on top of this, but they can only do so much and any given time.
With that being said, I am not asking you guys to do our jobs, but I GREATLY APPRECIATE the fact that you guys do take the time to report such. It is members like you that make this site what it is!

Thank you once again!!!

KEEP UP THE GREAT WORK!!!

The best way to prevent SPAMBOTS is to cook you SPAM in a frying pain, no oil needed, till both sides are crispy.
Reactions: Revell-Fan

zathros said:
The best way to prevent SPAMBOTS is to cook you SPAM in a frying pain, no oil needed, till both sides are crispy.
Click to expand...

You've never been "truly" hungry. You probably have, but you reminded me of something. Not to proud to say that when I was first injured, "Worker's Comp" played games with me for 8 months. 8 months without a dime income, and I needed Spinal surgery. I don't anyone who could go 8 months without pay, with no help. I was eating old french fries I found in my van (it was Winter) and happy to have them. The insurance carrier finally got nailed (Liberty Mutual, yeah, that's right you bastards), and I got 8 months of pay at 80% of what I was making, which was not bad. I owed a lot of money. My landlord, when I told him I had to leave, because I had no money for rent, told me to just stay there and pay him if I got some money, but not to move. He was a Godsend. He was also schizophrenic, and I took care of him, making sure no one scammed him, as many people tried too. His family contacted me and told me to please stay, as he would not speak to his family. He was very sick. He asked me what I was doing for food, and I said "Whatever I could". He fed me for 3 months. I paid him every cent plus some and took over managing his small 3 apartment house. I rented out the apartments and made sure the people paid, as he got ripped off so much. I also did all the electric and plumbing repairs.

I never will forget that plate of fried eggs and Spam, damned, that was so good! The first warm meal I had after a week of grazing. Some may be thinking, "Why didn't your family help you?". I don't have an answer for that. The wind blew hard in my family. My father died when I was 5, left 7 kids behind. We define Diaspora.

P.S. I won that compensation case, and was rewarded one of the largest payouts in Connecticut's Workers Compensation payout. I fought for 8 years. The judged recused himself on ground of "Bias and Prejudice" against me. I would be ashamed to tell you how little I received. I am now unemployable, and uninsurable. I cannot sub-contract, as I cannot get insurance, which the state requires. BLah BLah BLah. .................
Reactions: Cybergrinder

Wow Zathros, that's incredible. Great that you & your landlord could help each other out. A friend of mind went through a similar experience here with the Road Accident Fund (compensation for injuries sustained during an MVA). He also had legal battles but got a huge payout after a few years. He suffered neurological damage & now lives with & supports his parents, also unemployable (dunno about insurance).

You know, I wasn't sure if I posted that. I was going to delete it. People have to help each other. Otherwise, none of this is going to work out. None of us are getting out of this alive, whatever "this" is. I can'y get Social Security either, because, while I was in a full body cast, the Judge, (yes I fought the SS/SA (Social Security Administration)), determined I was no longer disabled, and thus went long enough without working. So after paying into the system for 45 years, I got "zilch". Due to a change in the law, I lost my 10 year pension from Sikorsky's buy around 90 days. I have absolutely no source of income, but when I do hustle up money, I will tell you I will never pay a penny of tax again, ever in my life, if I can get away with it. Since I have a small albeit, but complete machine shop, and a Mig/ and Tig welder, sometimes I fix cars by patching those wholes that inspection won't allow. These are metal repairs with very little filler, just thin smoothing. then some primer. They can go somewhere else and have it painted. I have helped some people out of jams.

A friend of mine has this really big truck and the cab mounts rotted on the inside, and the cab collapsed in the rear. Since the flat bed dumped, he was super bummed out. He is a tree person, his wife is a certified tree doctor. He really needed that truck. I cut the cab's corners out, and what I made inside was far stronger than what Ford put designed. He helped me, as doing big stuff like that is a bit too much. He was the one who found my M.G.Midget for me, (for free too!). I didn't charge him for that job. That how things go, I mentioned I wished I had an M.G. t work on, and he says, I know where you can get one for free. He cut down the 8" diameter tree that had grown through the passenger compartment, in around 15 minutes. I brought a battery, a portable gasoline tank, and though that car sat for over 15 years, I drove it onto the flat bed, (I had to file a shi*t load of the brass connectors to get the electrical system to pass electricity. I could tell the guy was a little pissed he didn't charge me. We cleaned up the area, cut and stacked the small pile of wood though. My friend and I probably put 8000 miles cruising around in that car, which I am currently restoring. It looked just like the picture below when I drove it around, though mine had the grill in it. I have a set of 5 of the older style rims which will take "Baby Moons". I hate the original "Rostsyle" Crager Mag imitations. 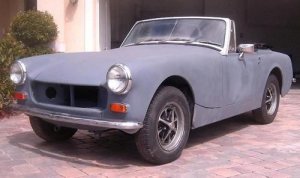 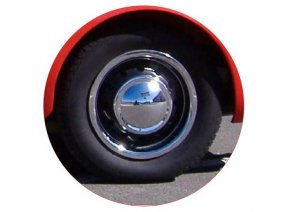 My Dad used to have one of those!

I've had mine for so long. I hope to leave it to my son with low miles, modernized to the point of reliability, and modified for safety, handling, and a blast to drift down these back roads of Connecticut! I also have a huge amount of spare parts. Like another engine , stock, with 38,000 original miles (which I told him today, we may rebuild together). 4 doors, spare hood, trunk fenders, rear quarters, radiator, windshield wiper assembly, 2 Windshield solid aluminum frames, all the stuff that will slowly become impossible to find. I think I have three grills. Not in perfect condition, but good enough to match the age or the car. A month ago I found my other DCOE 40 Weber Carburetor. I may build the other motor as an exact replacement for the one I have. That way, if I run accross an M.G. with a blown motor, but excelent body, I'll pick it up for $1500 bucks, throw in my motor and tur it into a $9600 dollar car.

I think that you & my Dad would have a great conversation about old cars!

He also had a Triumph Spitfire, sadly that got written off on my parents honeymoon. You could say they started with a bang....

He used to have the 1981 Rover (the one the British Police used to use) which was a straight 6 2.6l engine that had 2 SU carbs. He loved to hate those things! Very tricky to set up, but once done they are beautiful! That was a nice car to drive. But, as the saying goes for 99% of British cars, "no oil under it, no oil in it." Chronic oil leak on that car! He even replaced every oil seal a few days before it's roadworthy test, even then on the test bay, drip....

Lucky the examiner looked at the car, looked at my Dad, said "Brit car?" the reply was yes & the car was passed....

When I Blueprinted my engine, I used sealants that I had used on motorcycle engines I rebuilt. Some motorcycles have far more vibration and run much hotter. Yamabond #4 will seal virtually anything exposed to gas or oil. If you use a gasket, when you remove the part, Yamabond seals so tight the gasket splits down the middle,which is nice, because a very thing layer, and you can use it again. My m.G. only weeps from the valve cover. They only give you two bolts to tighten it, when it should have around 8 going about the perimeter of it. Otherwise, it does not leak, not in 8 years. The guys who are purists and insist on only using British OEM "Goops", get the oils leaks too. As far as the SU's, I had enough of those. The 10 degree more of duration I added in the Cam, and higher compression pistons matched the side draft DCOE 40 mm Weber I put in perfectly. You only set the Weber up once, and never have to touch it again. I still have the SU's though, because new, they are almost $800 bucks, and these are in excellent condition. I just got a Mallory Dual point ignition for it! I should get around 35 miles mpg, consistently, in it.
Reactions: Cybergrinder

If only I/he could have known those tricks 20 years ago!

Its true what you say about the Weber's though, I remember my sister had Golf 1 that had a Weber, went like the clappers & no maintainance, as you said. Don't know if you've ever seen the vacuum setup for the original Golf 1 carb? Confusing is just the beginning....

My Dad was so impressed with the Weber that he put one onto my 1981 Toyota Corolla when the carb started to misbehave on that car. I miss that car, had lots of fun in it....

It was a 1.6 sedan that had buckets of torque, I used to say that"ok, your car may pull off faster, but you get to read my bumper sticker on the hills"
You must log in or register to reply here.
Share:
Facebook Twitter Reddit Pinterest Tumblr WhatsApp Email Link
Top Bottom