Beastly, doesn't look like a model. Looks like a smaller version of the bigger one, but not a model. So realistic. Superb!

Thanks. The larger the scale, and the closer to actual construction techniques and materials you get, the easier it is to get that effect.

It's handy that the plan shows a retractable bowsprit. This makes it easier to build it removable . That is important as it sticks out very far, and would be in danger whenever this model gets transported. 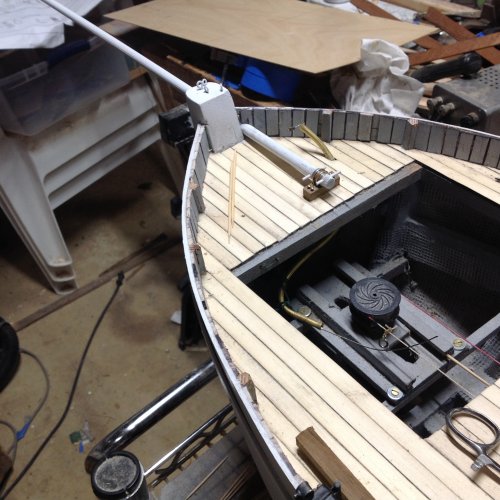 I have three home made cleats, fashioned out of 130 year old yellow poplar heartwood , salvaged from plaster lath leftover from a kitchen remodeling job at the farm 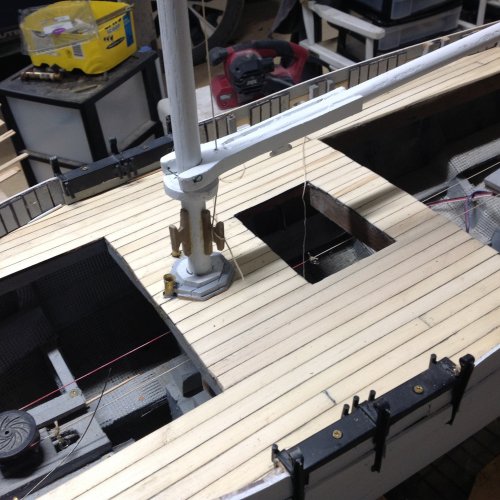 When I painted the mast, it was such a tight fit I had to sand the mast to get it to fit again . At the front of the picture , you can see the chain plate is now screwed to the bulwarks. They are also glued to the bulwarks with Leach F-26 construction adhesive , so the mast stays, when they get made, and attached, will provide lots of support to the mast. 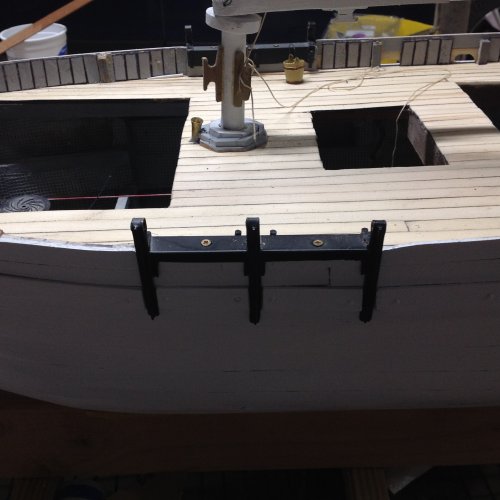 The plans are a big help figuring out the rigging; but Inposted this picture upside down. 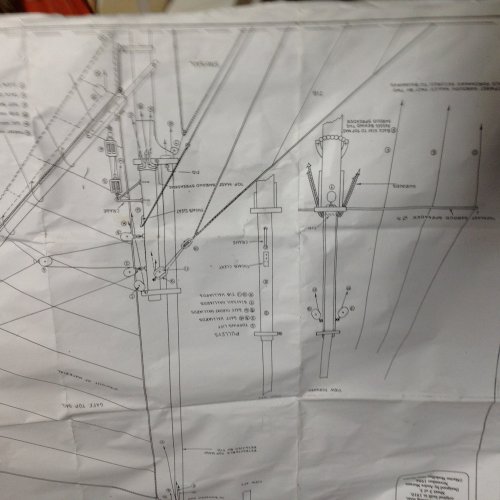 The assistant ship's carpenter wants a job as the helmsman. 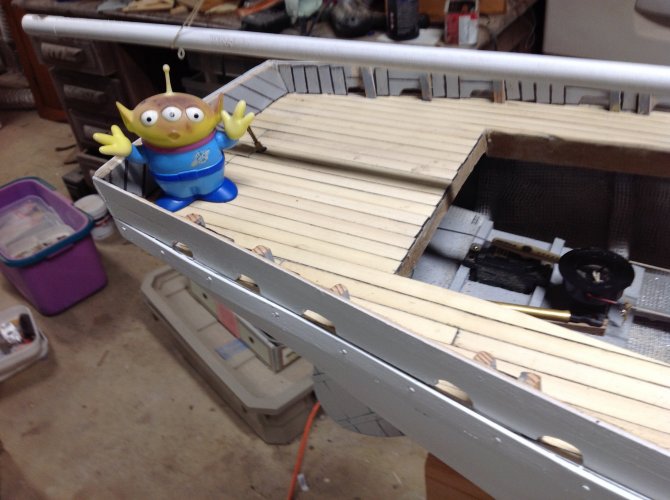 Here is The current overall picture . 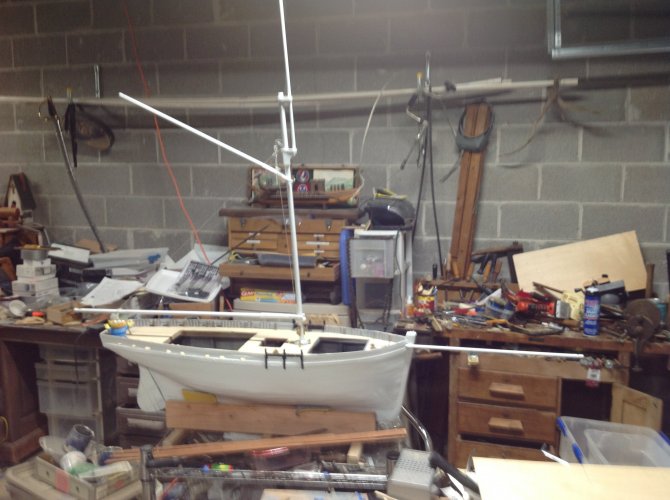 Next I go to work on the deck house , the cargo hatch . And a removable section of deck forward of the mast . That probably will be less than Ideal , but this is primarily made for sailing , and I wanted a big acssess hole in the front , because I didn't have a clue as to what 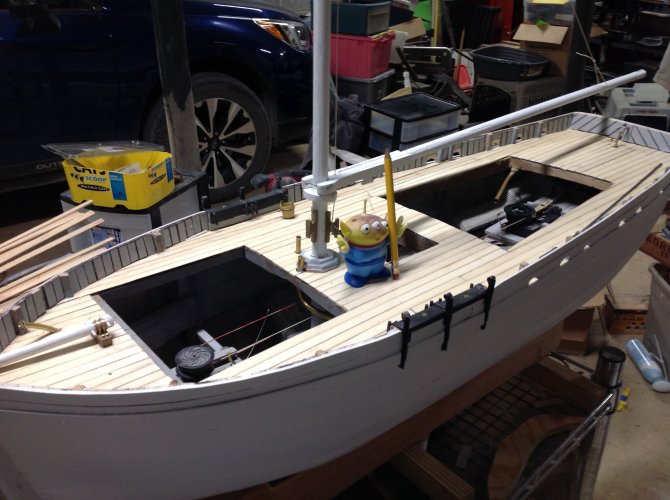 Here is my assistant again 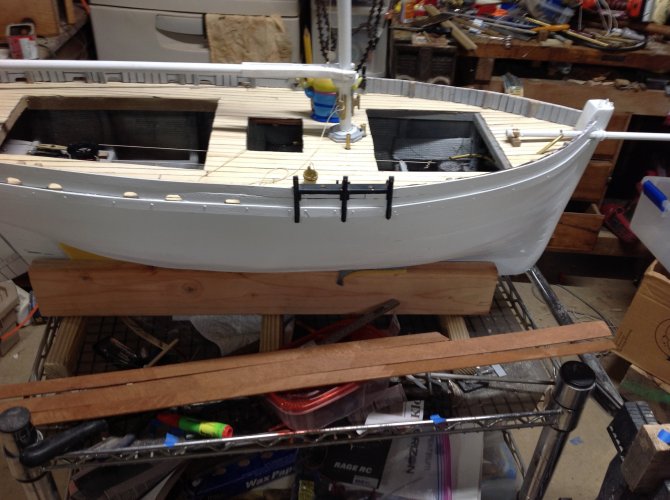 The Wood in front of the stand is some mahogany left over from a wood carving class my wife took in college . I'm thinking there is enough for this model to get mahogany railing, and perhaps just a bit of mahogany trim here and there.
Reactions: micahrogers

Really, quite a beautiful ship.

You are doing a great job love to see your craftsmanship. 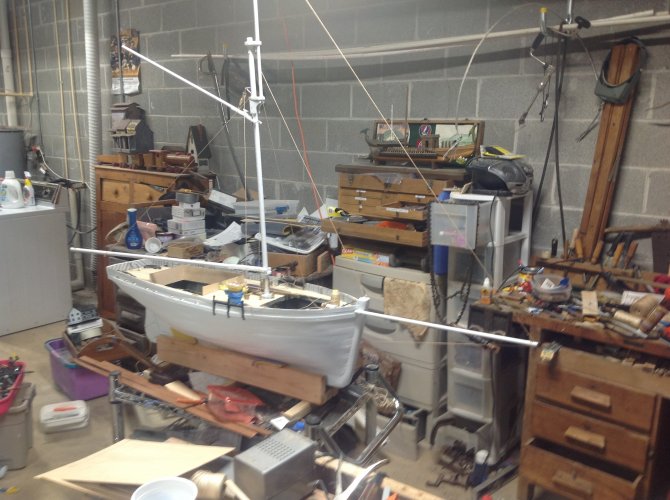 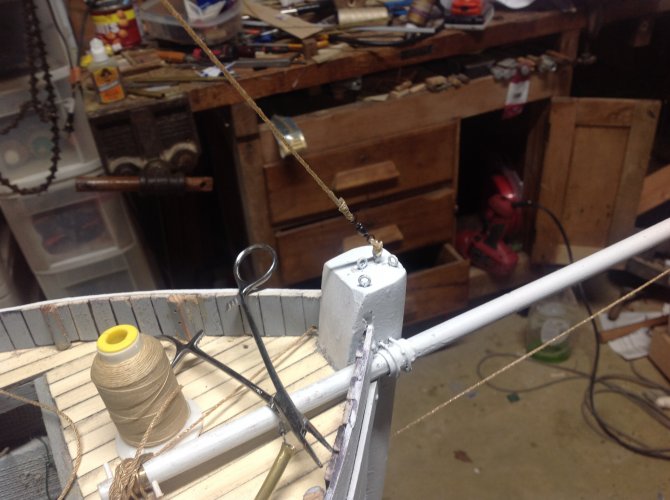 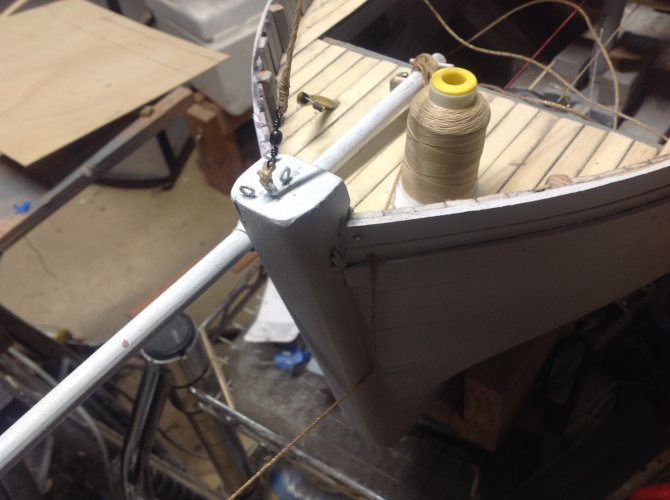 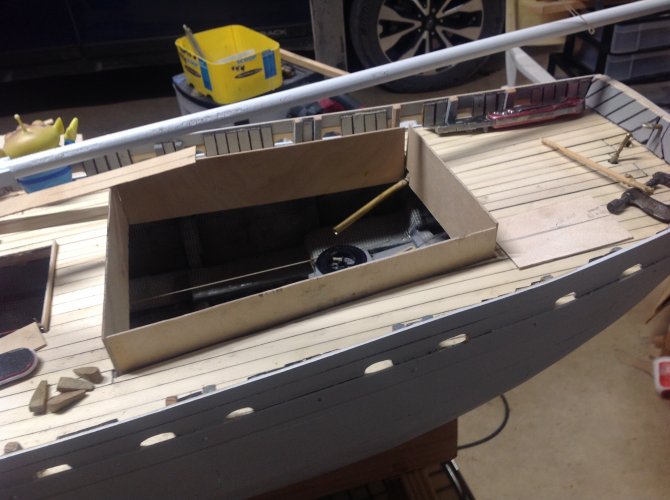 The last post kind of locked up , and my keyboard wouldn't work . I'm working on rigging.

Next week we will make a run to Texas, and the boat will go. Along with a Sewing machine I will have to use to create sails.


In the Next couple days I will need to focus on things that require my mini table saw And my drill press, which won't be available in Texas.

We will be back in TN, but in one vehicle , so this needs to go on this trip, So it can be worked on this winter , hopefully allowing a launch in the spring.
Reactions: micahrogers

You can always go back and edit your posts. Fabric sails will add a lot to the model. I'm looking forward to seeing them. 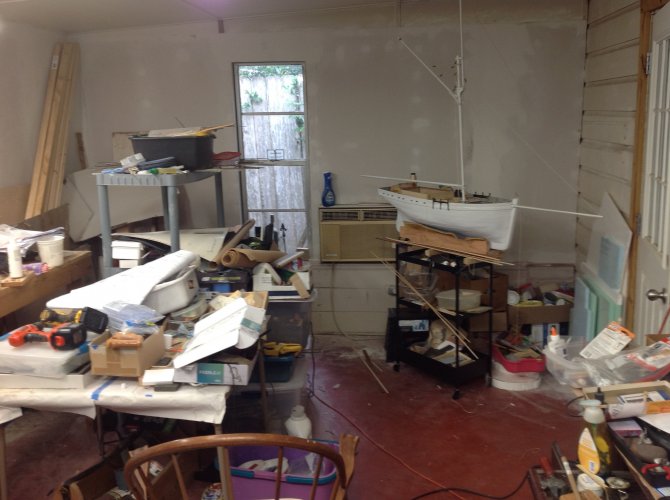 The Magnolia made it to Texas . I did have two home made cleats split. They were made out of yellow poplar ; so I'm fabricating more out of red oak, hopeing they will be more durable. As I work on rigging, I keep finding more lines that will need to be tied off somewhere. 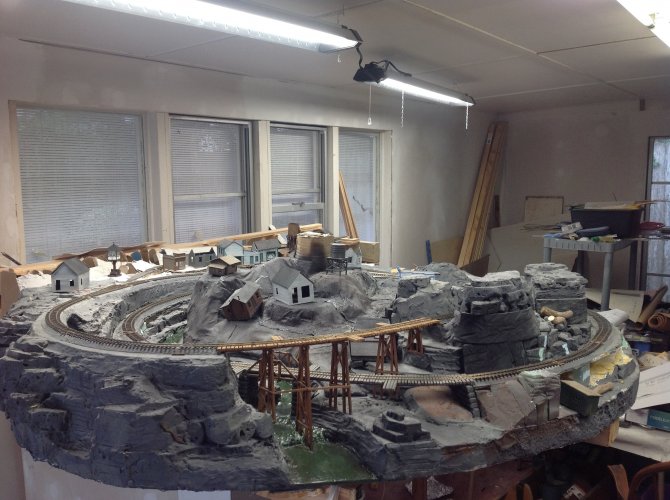 My Texas wiorkshop is horribly disorganized; last spring before leaving for TN.. I had just finished insulating and sheetrocking the workshop. But I hadn't cleaned up , organized or painted yet.

The space is much more comfortable 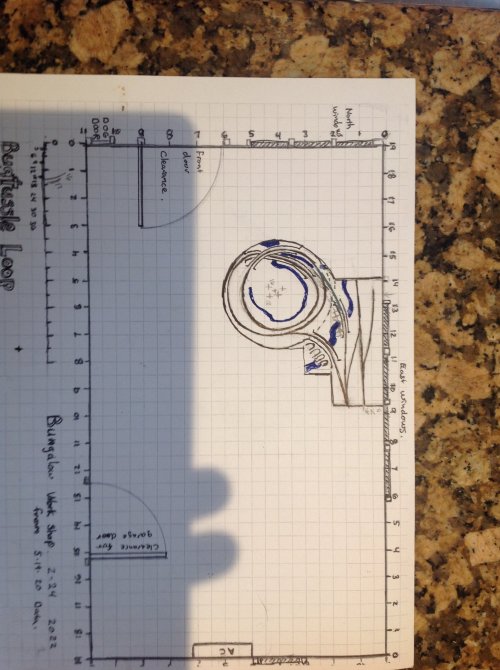 This is a scale drawing of the room . The layout is HOn3, ( HO scale, 3 foot narrow gauge ). The circular portion of the layout is the Bugtussel loop. This will be a Minning RR on the TN/NC border. It will be two level with a helix between the AC and the door to the garage. 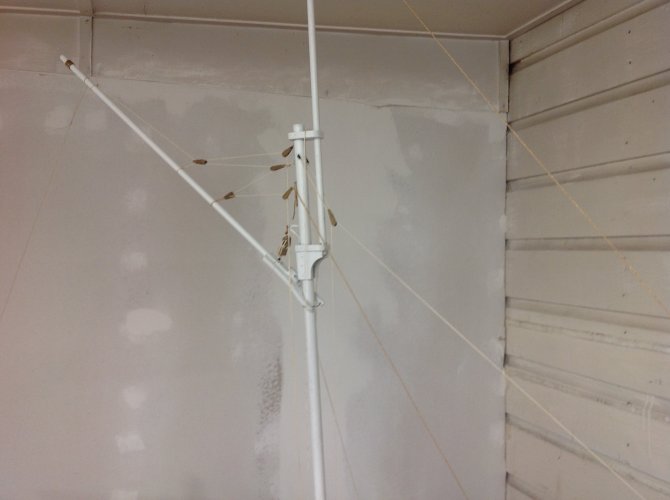 The mast, top mast , and gaff, before I put the shroud spreader went on . 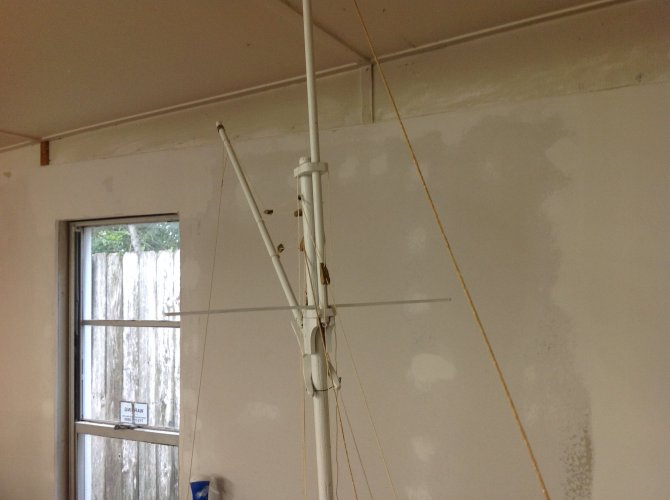 I had some concern about the proper material for the shroud spreader , till I found this aluminum bar. It's a little over scale , but lightweight , and sturdy. . It has seven holes drilled in it , one in the centered for the screw , and six others , three on each side , for the top mast's stays . This , with the mainmast stays . Is going to make the rigging look very complicated.
Reactions: Revell-Fan and zathros

The rigging is excellent!!

Have worked on the lateral stays . And their scratch built dead eyes. The lower deadeyes are built onto clevises that are pinned into the chain plates with brass pins . With a hole drilled into the end . Soft copper wire. Run through the hole. And wrapped around the end of the pin, acts like a cotter pin, retains the pin and the Clevis.

This makes the shrouds and dead eyes removable, to make it relatively easy to remove the mast. That will be nessary, as with the mast and bowsprit removed , this will fit in a vehicle. I'ts going to have to make a trip back to Tennessee, and will likely live there , unless I happen open some R/C sailors with a suitable lake in Houston.


Even then traveling with two dogs, a cat , a travel fridge , food that will meet my wife's dietary restrictions , plus medicines and clothing gets cramped quickly. 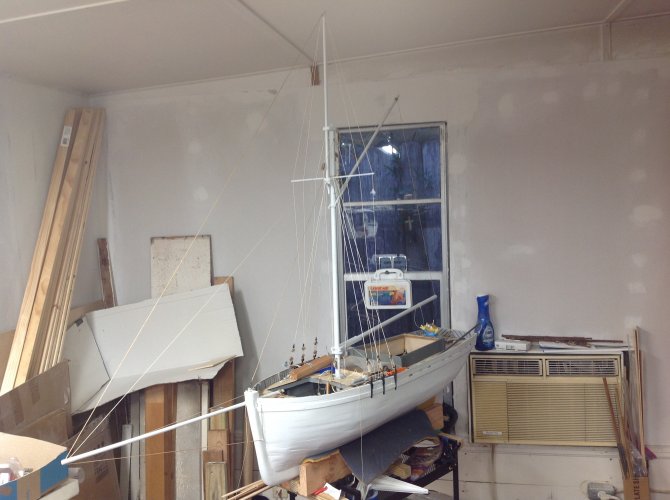 In Texas, it's cradle/ stand is on an IKEA nissafor ( a handy wheeled cart . It doesn't have a decorative stand . It's too fat to go on the mantle, and too big to fit anywhere in the cabin , so it will live in the 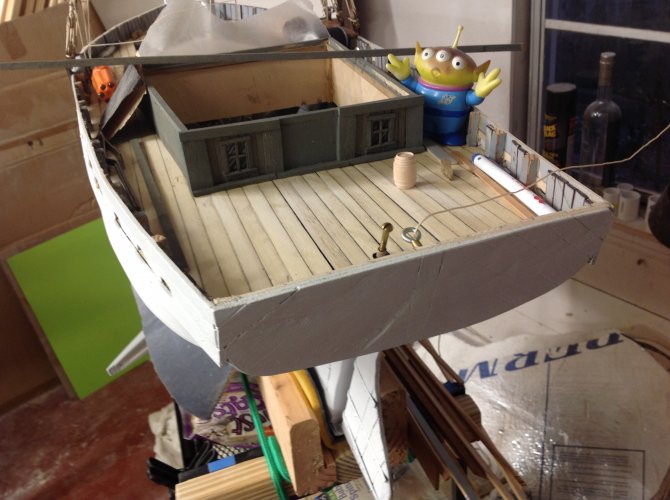 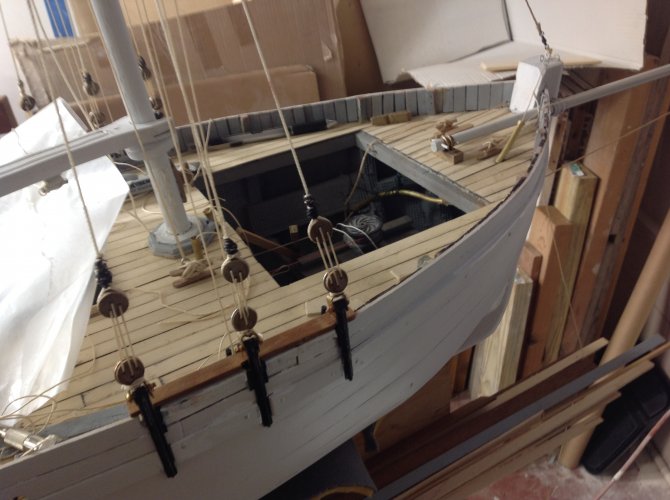 Here are the lateral stays . With thier scratch built, and somewhat irregular dead eyes , And the first bit of magogany railing.

I love natural wood, but this Hull has at least four different types of wood , so natural , or stain was out of the question. So paint was a natural choice. 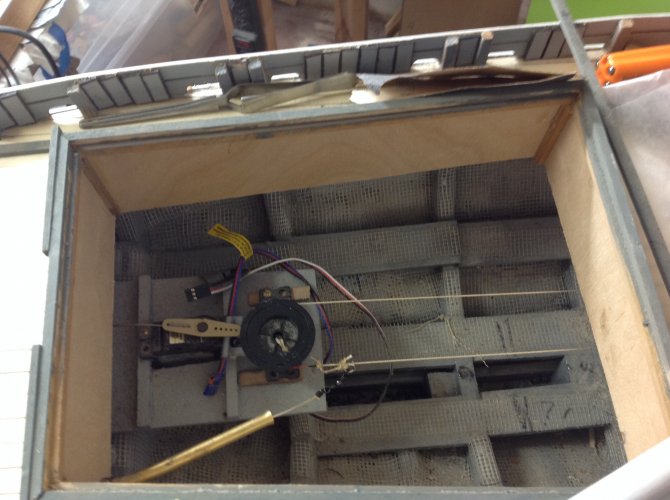 This is the servos in the hole under the removable deck house. The ruder servo, and the sail winch are all there is . The battery and the receiver plug in to these. Later , I will build in a hidden on off switch . The plans show a smoke jack on The deck house roof . It might be fun to Put a smoke generator in the deck house, wire it up with running lights , and run it off the on off landing gear switch , but I'll want to get it sailing before I go for frills.
Reactions: Chuffy70, zathros and Revell-Fan

This is coming along fantastic!

Those winch servos used to be expensive and hard to find. The ship has a real feel to it. He's a brute, get out of the way, if you're in anything lesser!

This really is a sturdy looking boat, so much going on - strings, pulleys, cleats...the whole shebang! Watch out for those alien crewmen, they'll call their friends at a moment's notice and suck that vessel clean out of the water!

The mining rail lay out is a wonder too...needs to be bigger I think

The sail winch was about $25.00 off eBay. The only downside was it didn't come with instructions, so I had to experiment. I did find that if rigged incorrectly, the sail winch is stoic enough to break 14 lb test fly fishing line .

The plan is to fill most of the room with trains, leaving enough room for a desk/workbench , and a couple chairs , and a surplus large screen TV . The benchwork under the existing layout is designed to permit a
Lower level , I'm going to put a helix in the corner to get a relatively gentle transition between levels.