Firefox is using too much RAM issue - possible workaround?

I'm on a Win10 machine and use the latest version of Firefox. FF is my main browser. It was working fine till something happened a few weeks ago. I noticed a very weird behaviour. My machine would slow down and come to a dead stop. I was eager to find out what caused this freezing and started an investigation. Virus scan was negative, so that was a good sign. I opened the task manager and found out that Firefox was the program requiring most of the RAM. I closed FF and my machine returned to its original speed. That confirmed my suspicion, FF was the cause. A google search revealed that this issue was not isolated. There are numerous reports on FF using up to 12 GB RAM which is enormous - and insane.

I was then trying different things: I removed the add-ons, restricted the memory usage, resetted the program - nothing worked. Even an un-install and a re-install did not solve the issue. There were several reports on a processing loop when it came to http3 protocols but the suggested actions were useless.

As a last resort I tried to limit the RAM usage with the task manager. FF has multiple processes which are displayed as a group. If you open that group you see the RAM used by the different processes: 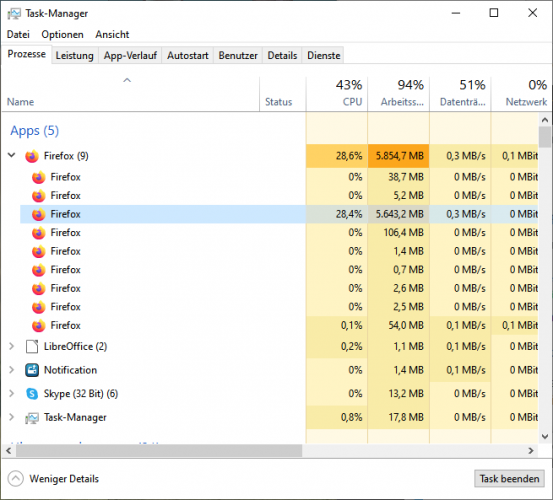 You can see that FF is using almost 6GB of RAM. And this is happening with only one tab open with static content (no videos or fancy graphics). I opened the process tree and saw that one process in particular is using a HUGE amount of RAM. Unfortunately the PID of that process changes after a restart, so writing it down and searching for it would not lead to a useful result.

I then did something which I usually would never do: I selected that process and clicked on "end task". And guess what happened: 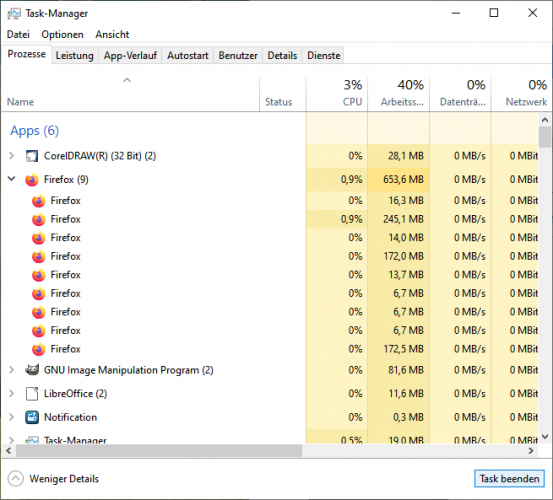 The amount of RAM dropped to 1/10th of its original size! Sometimes it even dropped down to 1/20th of it. I expected the program to act strangely and even shut down but that was not the case. I was able to use it as usual and did not notice any strange or unusual behaviour.

Finding this out kept me occupied for almost a week.

Then I read some news that the issue had been fixed by an update. I was relieved, ran the update and everything looked fine again. RAM went up to 2 - 2.5 GB but that was still manageable. No freezing of the system. However, a few days after the update the same thing happened again and the RAM use shot up. I was at a loss, but as soon as I killed that process I mentioned above everything was fine again.

I have no idea what's going on but maybe this tip may be helpful or even help in finding a definite solution.
Last edited: Jan 28, 2022
Reactions: mijob

I haven't used Firefox since Chrome came out. I hope you can get this figured out.

Just a quick note: The developers team has fixed the issue, the latest versions of FF are working normally again. PHEW!
Reactions: mijob

I use Firefox exclusively. Chrome tracks and keeps tracks of everywhere you go for a very very long time. It also doesn't search as deep into websites as Firefox can, with the appropriate browser extensions installed. They are quick to fix bugs too. I usually run CCleaner when I close Firefox to prevent instances of it staying open. Windows 11 has "Edge" open all the time, you have to force it closed.
Reactions: Revell-Fan

I use duckduckgo. No trackers and adds.

Firefox has a list of search engines you can add too, and use many at the same time. "duckduckgo" is among the list of search engines I use. Firefox can easily be set up for no tracker, no anything, not remembering anywhere you have visited. I have it set to remember and accept nothing. When I run CCleaner, it usually says "0" items removed.
Reactions: Revell-Fan

And it's happening again. With the latest update to version 100 the RAM usage goes up to 5400 MB. And again killing the process with the highest usage terminates the issues. :/
Reactions: mijob

For some reason all instances of Firefox aren't shutting down. I never have this problem. You could try using CCleaner by Piriform, it's FREE and Great!, after each browsing session to close down all instances of Firefox, Edge, and Chrome. Edge is the worse, it opens when you open any browser, and I don't even use Edge. I'm on W11 now, much cleaner OS. The computer uses less resources and the Kernal cannot be touched by any program. I have Firefox set up to delete everything after I close it. Otherwise you can get a lot of tracking cookies. You can configure Firefox to be a blank slate everytime you start it, and close it down. That is how I have it set up.
Reactions: mijob