Any Farscape models been created? 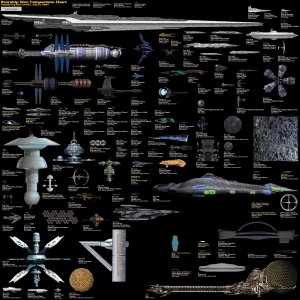 We Farscape fans have been sorely neglected. It is bad enough that it seems we have to explain the series to people, a lot. I have never understood why so many people were oblivious to it?!? I think it was fantastic Science Fantasy, and the first one to realize a worm hole, a controllable worm hole, would be a vicious weapon. It also showed that blue girls could be Hot! 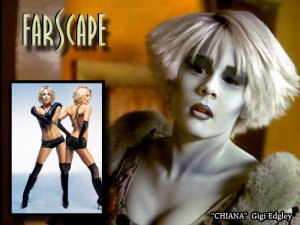 Who can't love a show with a nympho blue girl AND a homicidal muppet. 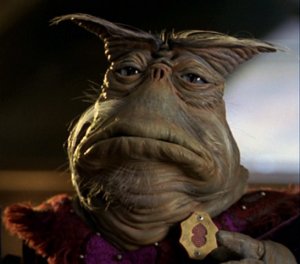 I too like Farscape. I only have one problem with it though (for those of us who are old enough to have seen the series), it is a remake of Buck Rogers in 25th Century.
Speaking of "Blue Chicks", I do have to say that Zhaan is quite HOT as well. 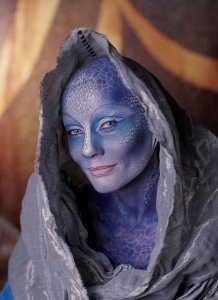 I really enjoyed that series as well. Now Moya would be a hard model to make, but Creiton's shuttle is viable as well as many of the peace keeper fighters. Any ways, At least two of them made the transition over to Stargate, with a couple of cameo appearances from some of the others.
Z

Zhan (Virginia Hey) was beyond Hot, she was truly a "Women" with all that that word implies! She was also in Mad Max!

This looks like the Moderator of a forum I once belonged too!

I read this thread a couple of days ago and thought I'd give farscape a try. I found it on netflix and I love it. Thanks for the heads up.
M

when i was a courier in Sydney I delivered goods to the studios where the series was filmed. I walked around the sets inside moyura ? What u see on TV looks different in real life
Z

Lantern of Gallifrey said:
I read this thread a couple of days ago and thought I'd give farscape a try. I found it on netflix and I love it. Thanks for the heads up.
Click to expand...

It's a great show, the ending is absolutely awesome. Well worth going through the whole series. This was one of the most underrated, badly advertised shows ever! :curse:
B

I remember when the plug was unceramonally pulled and the show ended with what I guess was originally a season closer and not a series finale. I was shocked with that ending. I was speechless at that particular ending.

I was so furious I couldn't even watch reruns of the show.

The series of episodes they came back with later to give it a proper ending were indeed excellent. I forgave them there tresspass.....mostly.

I still don't know if that was there original plan or if the people with torches and pitchforks ouside their offices forced them to end it properly.

You'd think the show would be fertile ground for modeling. I can understand not doing Moya, tricky doing an organic ship. but what about all those lovely fighters, carriers, and dreadnaughts. The only thing it seems anyone has created is Criton's Module.

I wish I had design skills. Unfortunatly they presently rank somewhere south of zero.

Oh well. since this thread has created a new fan of the series, that has to be counted as a good thing. Tell a friend. Create more fans for a great series.
Z

I think if people run across really good drawings and references, they might want to post them here. You never know, someone might pick up on it.

I agree, the ending was excellent, and the basic nature of it pleased me as I thought that would be the most dangerous weapon in the Universe also!!

Arghhhh..... I was a fan of the show and during the time, my lady friend and I broke up and she had the SciFi channel. Never got to see the end. LOVED the blue lady (healer?). Actually loved the whole series. And the idea of an organic spaceship. Now if I could only afford the dvd's.... sigh.....
Z

The end of that series could never be done in any other Scifi movie or series. it was something I wondered about, and it is original, and wraps the series right incredibly well. Totally worth seeing it. Maybe a local library has it. If you could buy one DVD, that would be the one! Remember when Criton destroyed the Scarron ship? What would happen to you if someone opened up a wormhole right in front of your ship, and the other end was on the Surface of the a Star, the gravity well would pull you right in!

I've seen the ship comparison chart before, and wonder: how big would the Death Star be on that chart?
Z

Vince said:
I've seen the ship comparison chart before, and wonder: how big would the Death Star be on that chart?
Click to expand...

This link will answer all those questions about scale.
http://www.merzo.net/

I would love to see a pep of a pulse pistol.
B

have pulse pistol if someone can unfold it

I would also love to see some farscape models

I drew this one up, its crude but effective