Another f-22 glider. this time in 1:72 scale. the flight performance is decent. it's a little too nose heavy though. I might have to put a little counterweight in the back. more pictures will come soon

Take weight out of the nose. Never add weight!! You could also try to change the angle of incidence on the wing. This will change the planes attitude. (Tilting the whole wing section upwards at the nose or dropping it at the tail end, as a wing section). Angle of incidence is one of the most overlooked details in paper model building, resulting in disappointing flights, and/or adjustments to the wrong surfaces. This is what keeps a plane flying and allows the plane to be trimmed for level flight.

Thats pretty hard to do with a plane with wings as straight and flat as the f-22 of any jet plane for that matter. This plane has a little to no air foil and the wings are directly centered along the fusalage. Maybe bending the leading edge might aid a little bit, but I like your idea of just doing a little bit of dissection and remove excessive weight

The plane has no airfoil because you didn't put one in!! I have done this with planes 2" inches long, made out of Mylar and toothpicks, whittled down. This plane should have a wing worked over with your thumb. It(the wing)really should have a bottom. You would not believe how much better this would fly with some attention to detail. I used to design very long flying gliders, they were hollow, and no weights were allowed. This is one of my longest and highest flying gliders. Also, the fastest, and the one that stayed up the longest.

As you can tell from the pictures, there are probably no flat surfaces on this aircraft. You model looks great. When you want these to fly really well, like use a couple of bottle rockets as engines, it can be done, and they go like a bat out of H*LL. They look excellent, I'm just babbling theory. 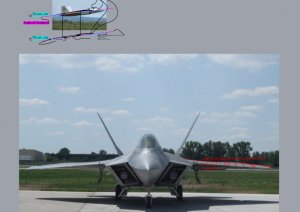 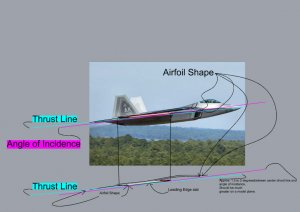 My own designs: (If you are into gliders, the ones you design will fly best. The nose provided substantial lift. It flew with the nose up around 10 degrees. Measured from to rear, on a flat surface. These planes were 4" to 14" long, the elevator was adjustable. 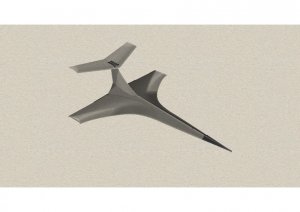 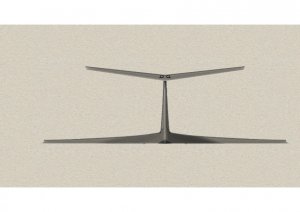 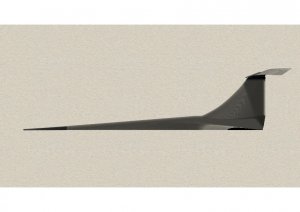 sorry for the late reply. just want to clarify, i knew i didn't put an airfoil in the paperplane, and that why i said it lacks a good amount of lift. i never referred to the actual plane

I got the impression that even the real model remains only in the airbecause of computers that constantly monitor the aerodynamic surfaces. Several current aircraft not keep in the air gliding without the aid of computers. It makes me wonder you have a Titan work to do !
....

well, i wouldn't say that. i have made f-22 raptor gliders who were very successful at outdoor flying. whats really inportant is to be able to keep the cg in the correct position to allow the greatest capabilities in flight. i even made b-2 bomber gliders with no stabilizers at all, and they soar like the wind. this particular model was just a case where the stupid creator placed too much weight in the nose

Remember, you are making a paper plane of an computer controlled aircraft. With the proper C.G. and having the wings shaped a properly, you can make anything glide. the pictures I posted above are of an actual glider I have designed. It has no internal weights. It will easily glider 300' feet. Toss off a tall building, I don't know, because it caught a thermal and I never saw it again. These gliders also landed, with the wind cooperating, no slightly up, and landed smoothly. I am tempted to post the templates, but then some one will grab it and claim it as theirs.

If you make an object that is shaped as an airplane or jet, and do not form an airfoil into the wings, it is not a glider, it is just something you are throwing in the air.

Wings are thicker towards the root as they generate more lift there and more narrow as the wing inside is no longer lifting the craft, the the mid wing, and tips are. A wing with a straight planform, looking down from the top, like a Cessna 172, is a G.A. (General Aviation) plane that usually cruises at a single speed. Air foils are a necessity for gliders, and since a glider goes through many stages of flight, one should expect to form an appropriate wing.

On the F-22, put the widest radius on the widest part of the wing, using a round pencil or wooden dowel, from the tip, decrease the radius, keeping the overall center of lift at the 1/3rd of the width of the wing, you will see where and how the wing should look. Once you have done this, exaggerate the bends, then flatten it with a book, just enough so the slight shape will be there. You will have a very fast glider. Never add weight to the rear of a plane to make it fly. That is just a poorly designed model. Change the center of lift rearward, of course, with flat wings, you don't really know what is going on.
You must log in or register to reply here.
Share:
Facebook Twitter Reddit Pinterest Tumblr WhatsApp Email Link
Top Bottom