One day before my big holidays a dear colleague at work asked me if I had an idea to make a cinema coupon for her which she could give to her nephew as a present on his first day at school. Since we both would not meet again for three weeks the project had to be done in no time. During my lunch break I swang into action. A quick google image search later I found some nice ideas which made me produce my own coupon design. It had to be easy and fast, so don't expect any wonders. My colleague told me that her nephew liked dinosaurs, so it was a given for me that a dino had to be featured as well.

Much to my surprise I found exactly what I was looking for: An easy to assemble dino figure in a good size which was not too tricky but looked appropriate for this purpose: 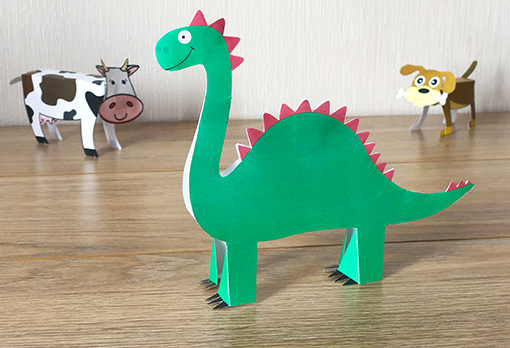 I haven't visited this site before but it features many nice and cute ideas for kids and family parties. It is definitely worth being checked out.

After gathering the necessary components I took everything with me when when my break was over. After my afternoon shift I swang into action and assembled the infamous Dinosaur Cinema Coupon! ;-) 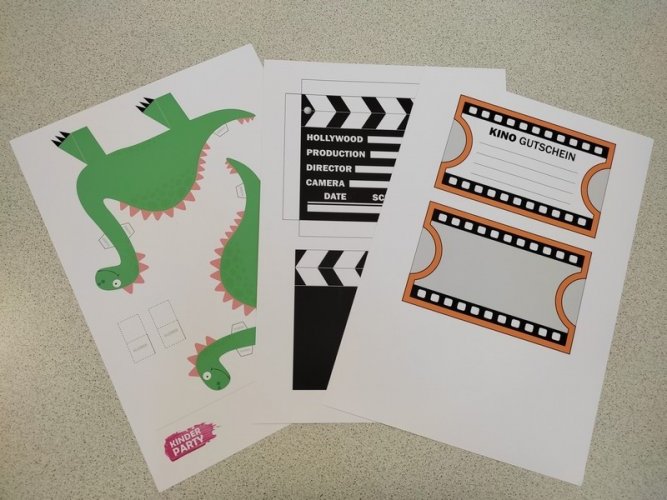 Both the envelope and the coupon consist of one front and one back side. 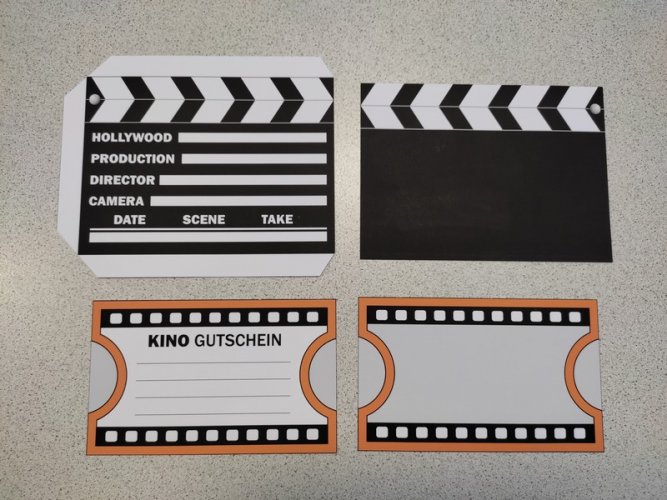 The envelope got a few flaps. 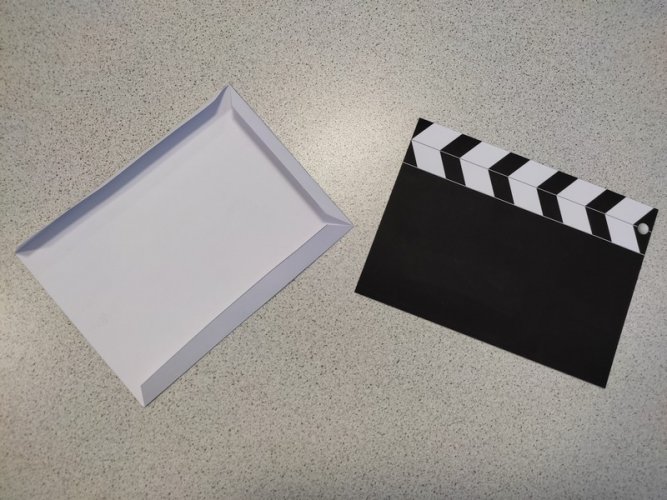 One side was left open in order to accomodate the coupon. 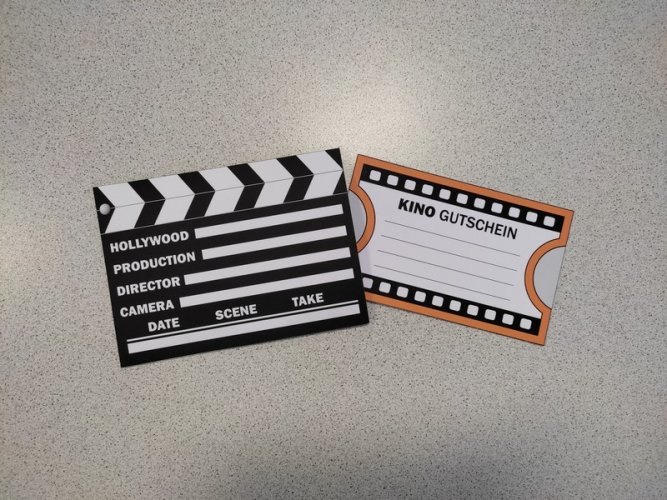 Then came the dinosaur. This was by far the most difficult part of the design since I had to switch scissors constantly to cut out all those small bumps on its back. And there were two halves which had to be cut out! Phew! 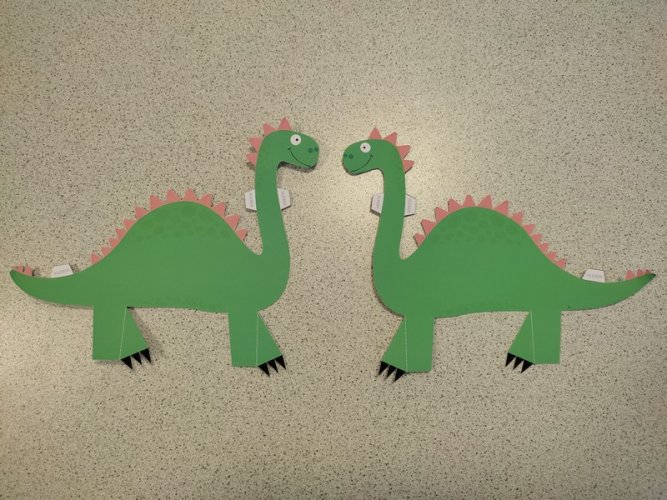 The instructions called for the flaps to be glued together. I also attached some glue to the bumps so that the model would not do the split by accident. Before both halves were joined I pre-shaped the belly a bit by pushing it over the edge of the table. That way the dino looks a bit "fuller". 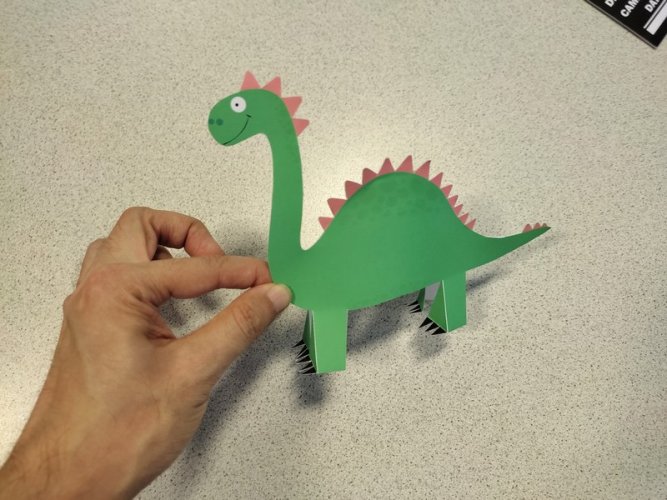 Then the dino was attached to the envelope and the coupon was inserted. 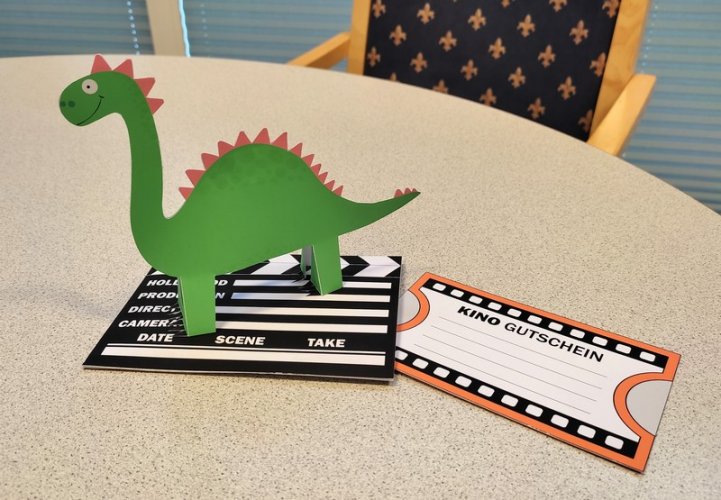 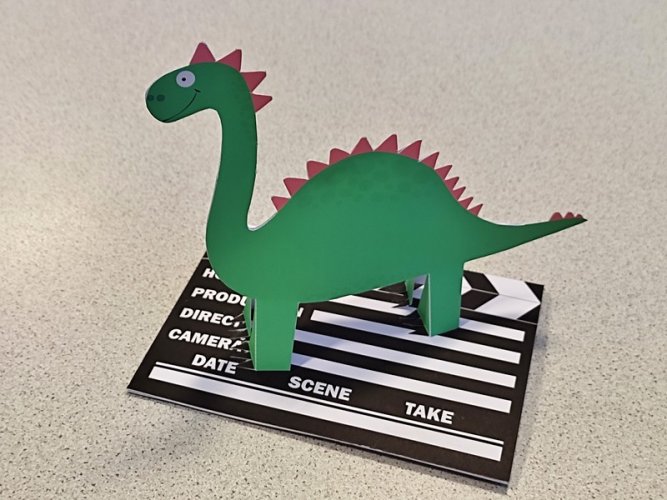 A few days later my colleague called me and thanked me for my fast action. Her nephew was elated to receive his gift as intended. Mission accomplished!

And yes, I will put the envelope and the coupon into the Resources (after I have translated the coupon to English ).

Thank you! What's most amazing is that I did not leave any sweat marks on the parts. It was darn hot here!
Reactions: mijob

I will say again, you are a treasure to your friends! Even something so simple is done with your characteristic enthusiasm.
Reactions: Revell-Fan and mijob

Revell-Fan said:
And it's up!

So which movie are we going to watch then?

You mean I can only watch 1?
Reactions: Revell-Fan

Great stuff, very well done and I'd love a cinema voucher too...

Reminds me of giving my friend the old Batman film on dvd as a present, so I thought what can I put it in...so I made a comedy 'BOMB!' and put the dvd inside
Reactions: Revell-Fan

micahrogers said:
You mean I can only watch 1?
Click to expand...

We can watch as many movies as you wish - as long as you are buying!