Great work. I'd be erecting a cat proof storage place around it.

It's a good thing hobbies are entertainment expenses.

Witness the undeniable joy of making 96 of these detail pieces; HA! 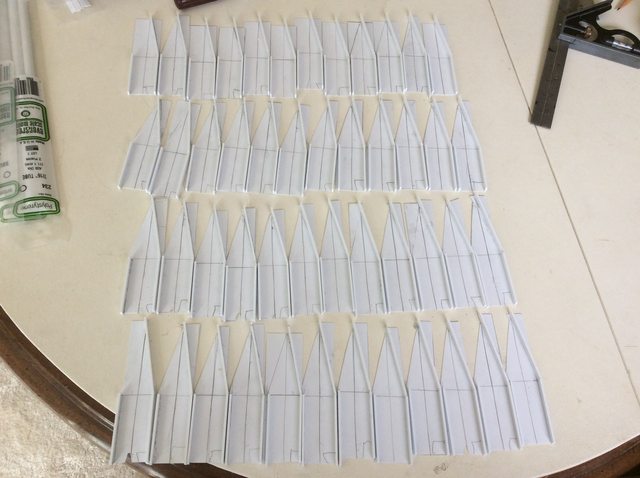 48 shown here but I know I'll probably need at least that many more later on.

I streamlined the procedure by making an assembly line. I'd say these detail bits are about half done.
Reactions: zathros, cerbere, Revell-Fan and 5 others

Blackadder said:
It's a good thing hobbies are entertainment expenses.

Witness the undeniable joy of making 96 of these detail pieces; HA!
Click to expand...

This is the way. Such a true statement.
Reactions: Revell-Fan and Sudsy

Psychotherapy..... all the while twiddling my thumbs and toes when I could be basket weaving.

Whew!
48 of these bad boys and they're only half done. 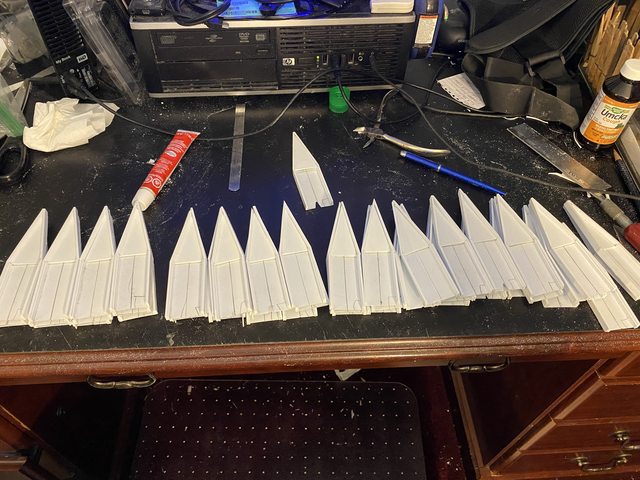 But finished enough to mount them on the corner bastions.

I just have to match them in threes to allow for minor discrepancies in size.
Reactions: Rhaven Blaack, Revell-Fan, zathros and 1 other person

Talk about getting a repetitive motion strain great work.

I would tie a fishing line to the highest point of the model up to the ceiling, that way it can tip over, just spin around. This may piss off your cat though, be warned.


zathros said:
I would tie a fishing line to the highest point of the model up to the ceiling, that way it can tip over, just spin around. This may piss off your cat though, be warned.
Click to expand...

She might also get strung out!! ......In all honesty, with the work you have put into this model, I would just hate to see it fall over a break itself from it's own mass. I know another modeler that the same thing happen with a paper version of what you are doing, and it took a lot of fingers to put that beast back together. I do love cats though, mine have destroyed almost all the models, evenn knocking the lifeboat off of my 32" Lilla Weneda" model, to let the dog chew and crap it out on the lawn. The lifeboat really went though it. I mowed over it till it dissolved in the rain. An ignoble ending.

I wholeheartedly agree. This is a one-of-a-kind build.

The business end of the Emperor Titan is it's massive arm weapons.

For too long I have put off finishing up these bad boys and not realizing the primary purpose of lengthening the legs. The guns were hanging too low and interfering with the hip joints or so I thought. In actuality the thighs were just too short. 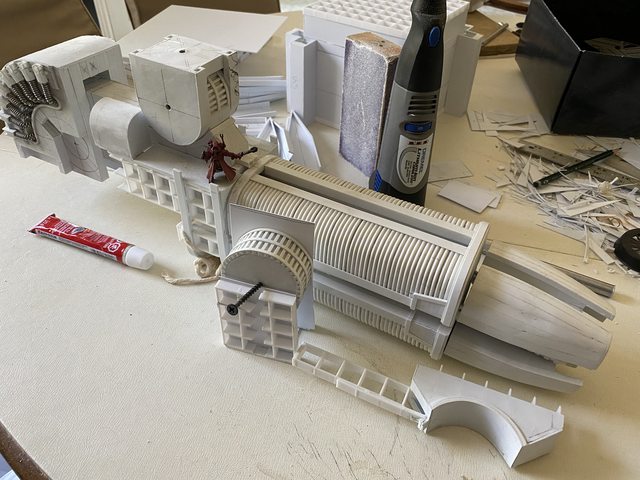 Now we can see the preparation for the gatling cannon mount device which is greatly modified from the original mount bracket. 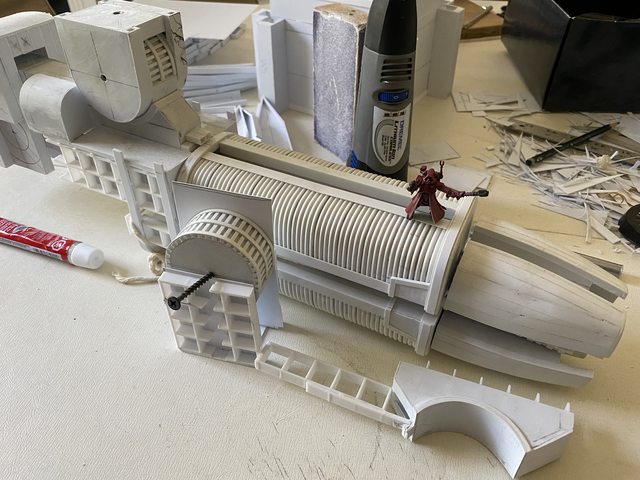 I've only just started the second gun mount but I thought it would be best to show it in the beginning stage.
Reactions: Revell-Fan, zathros, lyter1958 and 3 others

Thanks for the reply.

I'm trying to rationalize a multi-barrel weapon that looks like a gatling gun but does not rotate. 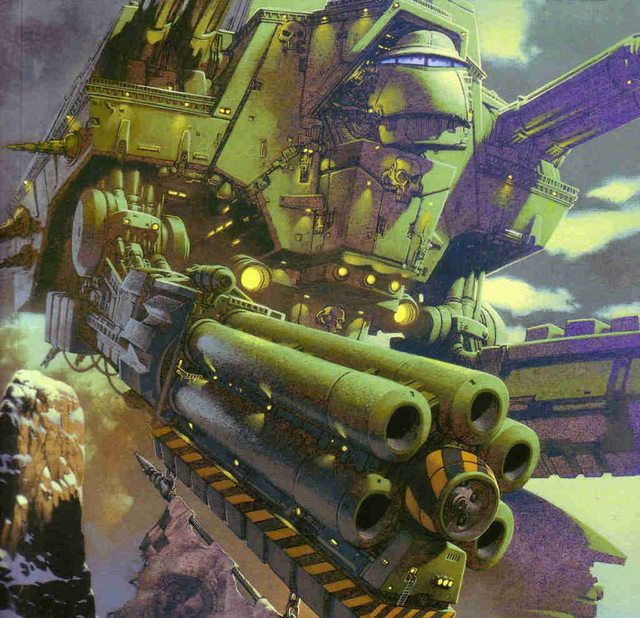 Let me know what you think.

I don't even know what kind of projectile this thing shoots but judging by the end of the barrels the shot is oval. I'm not going there. I draw the line at an oval shot.

I like the idea of a rotating chamber and I'll keep that but I also prefer the weapon mount disk over the bracket mount seen below: 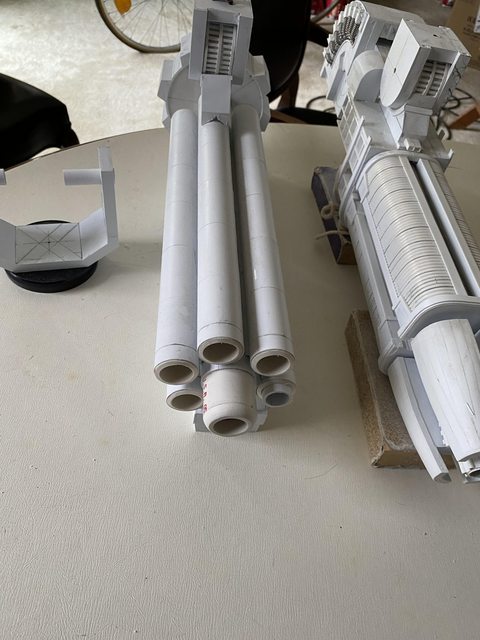 The Bracket mount just looks too plain and ugly. 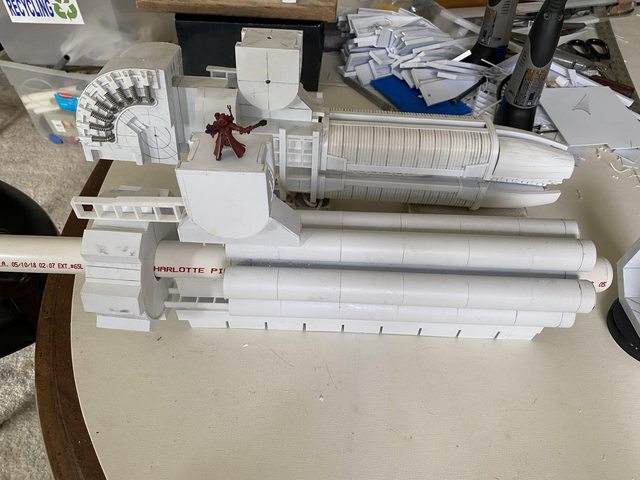 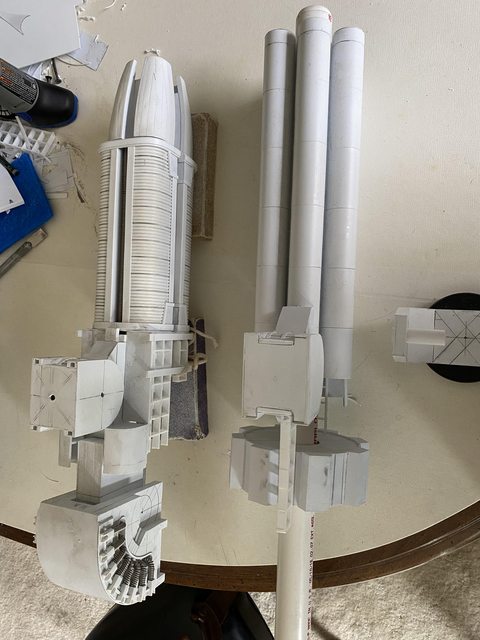 I just have to rationalize the barrels and the cylinder arrangement.
Reactions: Revell-Fan, zathros, lyter1958 and 4 others

I like the picture and plan to incorporate many of it's features. I was recently apprised it is an energy weapon. And of course the scale is way off but the individual details are quite worthy.

I found some of my old images as well and decided to play around with one.


My old Photo Impact 13 program produced this in an hour or so: 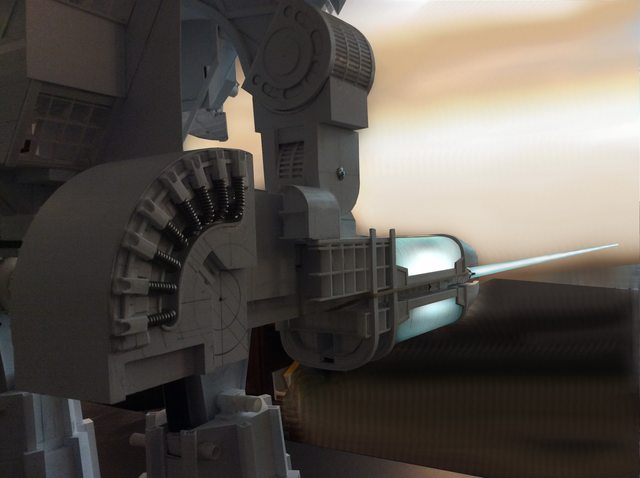 I began this Mega Blaster shortly after the Plasma Cannon but due to the conflict in scales I wasn't sure how large to make the arm weapons so I left it undone.

As I built the body and legs it became apparent that both weapons could be ridiculously too large or too small.

Originally I thought a meter tall (39 inches) would be a good height for an Emperor Titan but proportion wise as I built it I had to keep correcting the height.

At least four to six times at least. A month or so ago I increased the length of the thigh about 6.35 centimeters (2.5 inches). Hopefully for the last time.

The model now stands about 1,27 meters (50 inches) with still the spires on the bastions to go adding another six to eight inches. 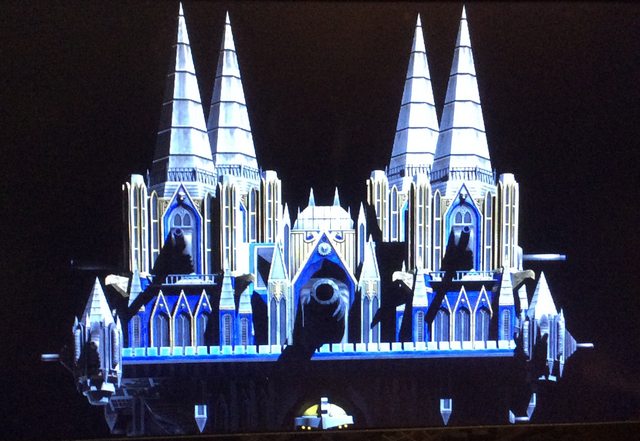 I managed to make the drum training device which is a lot more business-like than the forked yoke bracket. that is seen on the original Joazzz2 creation. 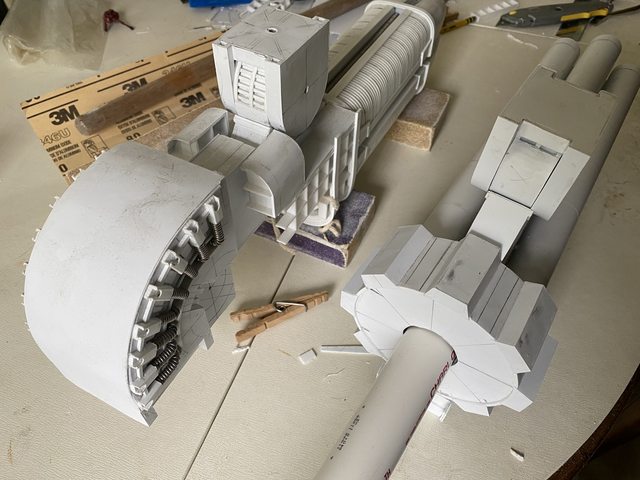 A dry run assembly today with a side by side comparison of the Mega Blaster and the Plasm Blaster Cannons.... 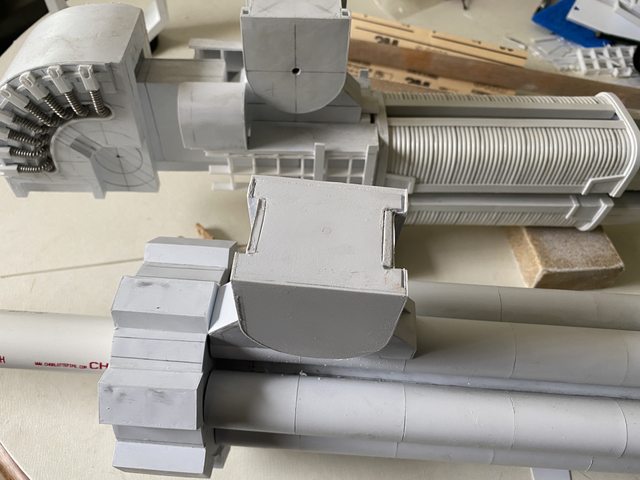 confirmed that the arm weapons are in a close scale to the rest of the Emperor Titan. 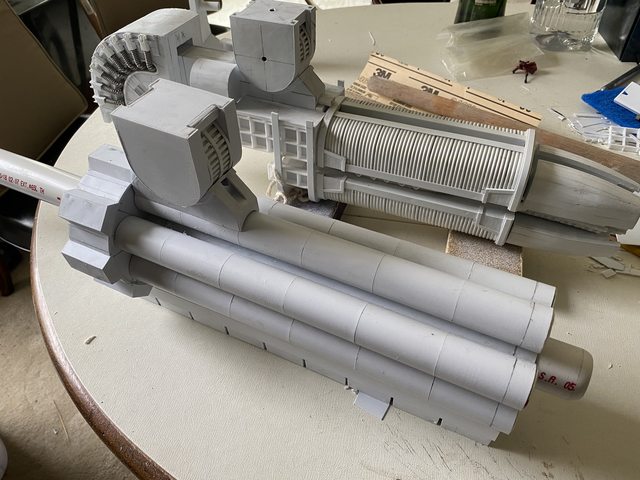 A final touch today is the forward muzzle plate with a stylized 40K skull embellishment to start off the fine detailing. 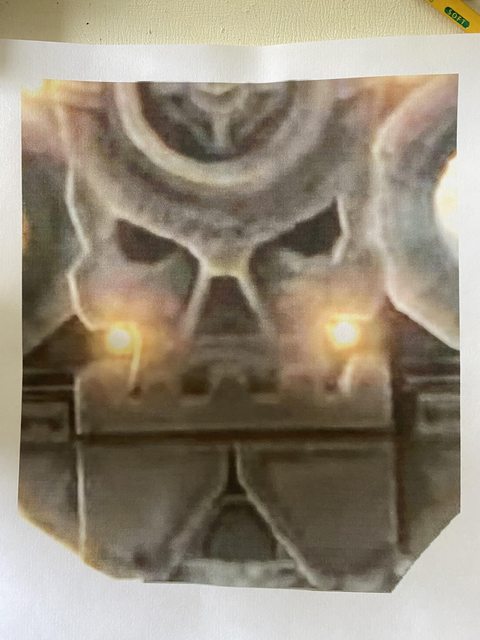 I found just what I was looking for; I love the internet.

What the doctor ordered. The rear assembly of a Mega blaster that can be adapted to my construct with a minimum of alteration.

Just assemble a couple of boxlike structures and attach the elevation drum gear. 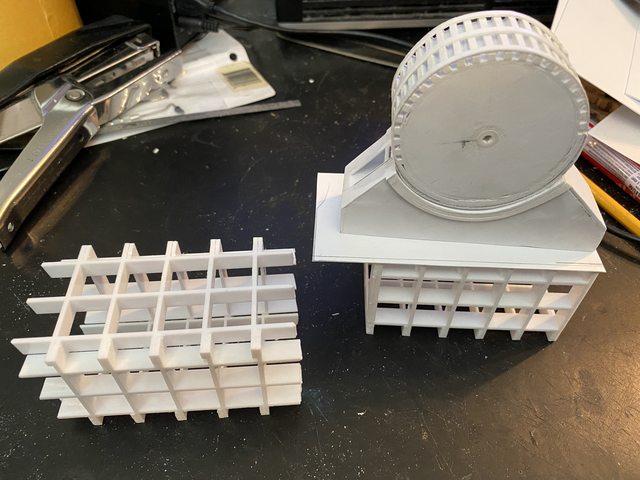 Then somewhat faithfully copy the detail and we'll have the suitable energy producing end of the Helstrum Megablaster. 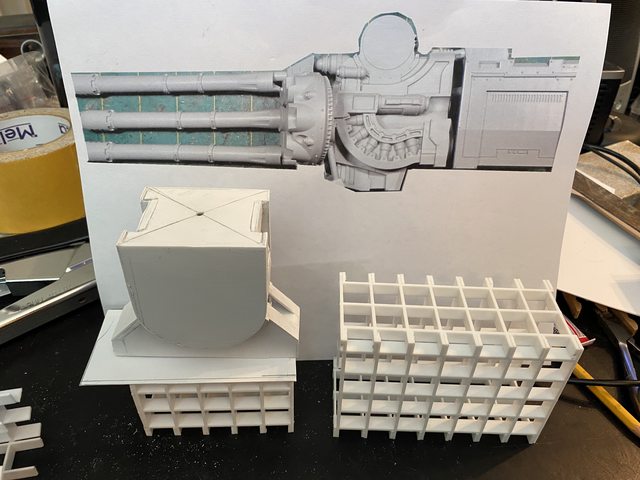 I even have some of the armour to replicate.

The clothes pins are on the rear of this piece.

The first 3 images are of the paper template I made to pattern the drum gear saddle. 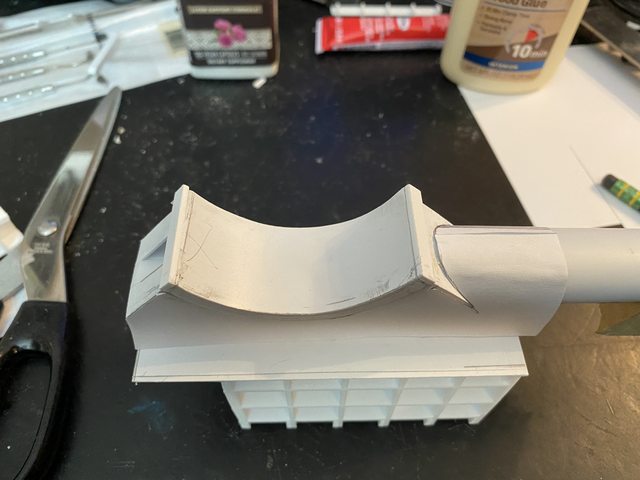 (I just make names for these parts as I go.)

I made the pattern in full originally.... 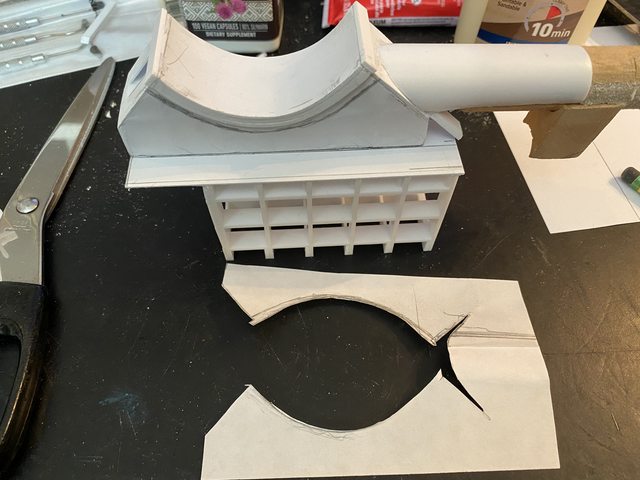 Although the pattern fit rather well I found making the pieces would be easier if I made them in two parts. 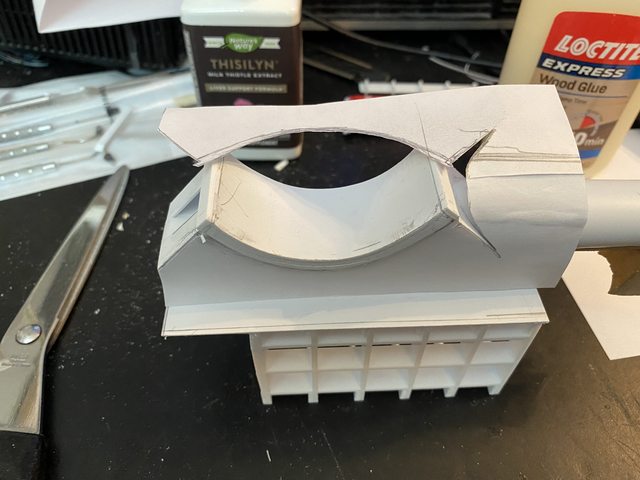 Than to make the styrene piece from the pattern in one whole piece. 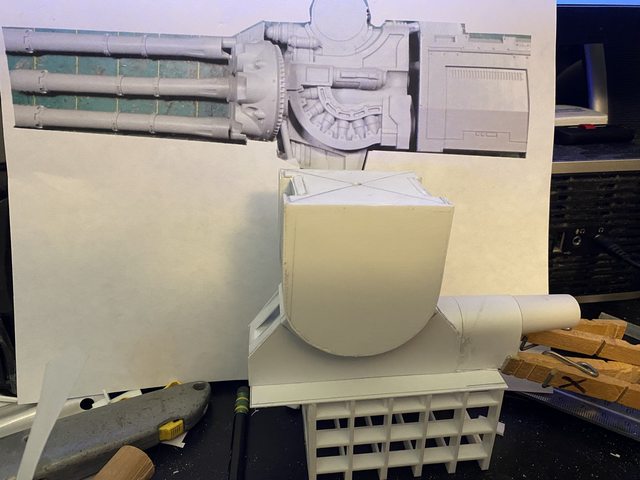 Is my face red?

A day or two ago I was apprised that the images I was using for my Hellstrom weapon were of a Chain Ammo weapon called a Mega Gatling cannon. :blush: (Why is there no blush emoji?)

In defence I rationalized that the overall basic counterbalance form is what I was looking for and not the actual details.

But in retrospect it is plain as day that the curved structure on the lower edge of the center section does readily show an ammo belt feed replete with 6 rounds and a bolt action loader.

The ammo box being the rear third section of this very heavy weapon. (The six PVC tubes alone weigh a couple of pounds .)

While both arm weapons at this point weigh 2 pounds each the front end moment of the Plasma Blaster is 4 ounces and 10 ounces for the Hellstorm Cannon.

Interestingly enough it is precisely what I was looking for when I first began this multi-barreled weapon I.E. a projectile firing weapon.

So now I have the option of both a 5 barreled energy weapon (redundant with the Plasma Cannon). A quick change Hellstorm Cannon and a six barrel Gatling gun.
Reactions: Revell-Fan and micahrogers

I fully understand your frustration. I have dealt with similar issues when making models. The "DEVIL" is (indeed) in the details.
With that being said, you are doing a truly AMAZING job on this project!

As for a "Blush" emoji, there is one that is titled "OOPS"

Oh boy, when that fellow is firing his guns, you might think it will trigger an earthquake! Incredible work, pal!