Battletech, where my miniature wargaming started...

...and where my 3D printing is presently focused! 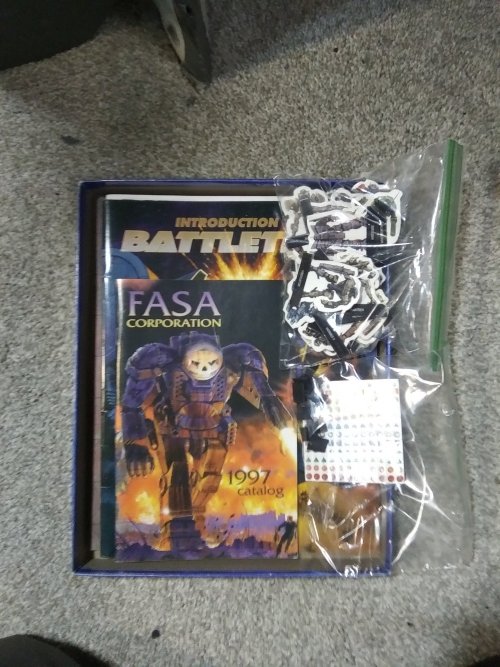 So, I've 'retired' my starter box that I acquired in the late 90's. I had all the components still, and reloaded them into this box and put it on a high shelf for display only. After all, I now have the new Catalyst Game Labs Introductory box and a number of the current rules books (Total Warfare, Tech Manual, Tactical Operations, etc).

What I had trouble finding, were mechs though. See my other post in Resin about my 3rd party build using some awesome resin miniatures... I just struggle with letting my sons use those however, so I needed some more durable mechs. People have been 3D printing the Mech Warrior Online models (and a few modified 3d meshes from earlier Mechwarrior 4 and 3 single player games), so I gave it a shot not expecting much from my FDM printer (Lulzbot Taz 5).

Here are a couple of Urbanmechs I printed. Left we have one that is viable for 15mm (1:100th) scale table top games, or decoration, and on the right, the 6mm (1/285th) scale used for Battletech on the map sheets or miniatures rules. 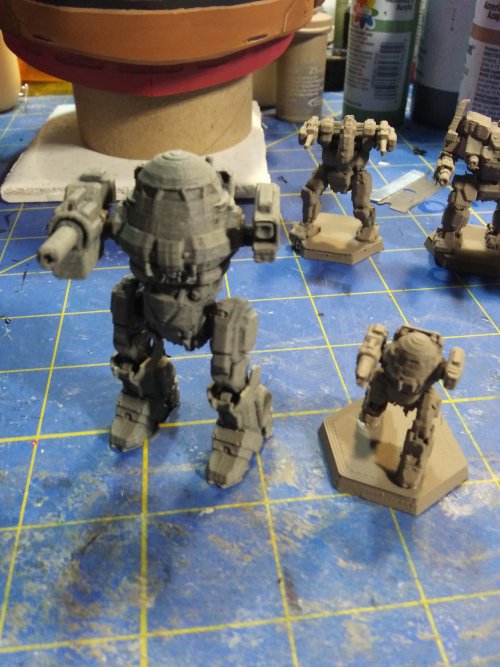 Just to the rear, you also see a primed Blackjack and Awesome in the 6mm scale. These all had a layer height of .14mm and a 20% infill. I found the need to use a raft as the feet on the 6mm scale are too small to effectively sit on my PEI print bed. They required support, and I used zig-zag at 30% at first but had to re-assemble the small ones a lot as that was too dense and pieces like feet and gun barrels fell off while I removed supports! 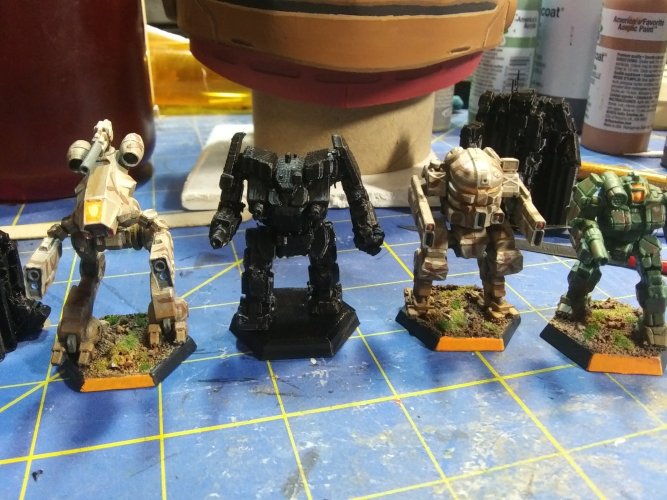 Here is the Awesome next to the resin Stratos Minis (Bullshark on the left, 3D print Awesome, Flashman, and CGL Griffen). I learned NOT to print in black for these in the future. The visual pain of trying to clean up black 3D printed plastic was enough... I will print the bases black however, as they have little detail I need to worry about, just some basic sanding. 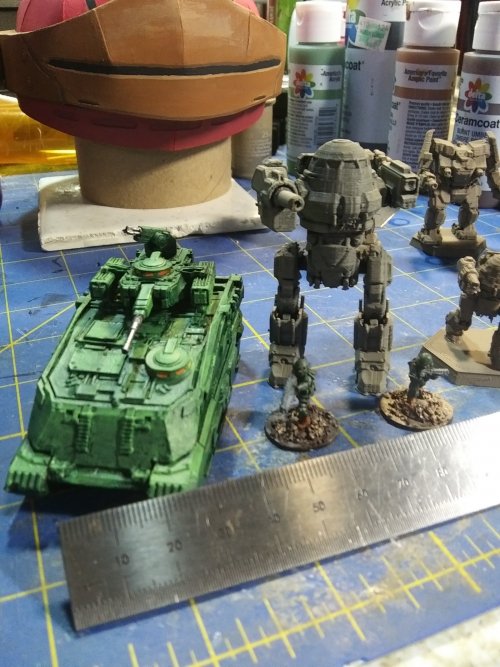 Finally, I had to put this Urbie next to some of my 15mm army and see how it compares, and yes, it works perfectly. I'll try to dig up which model I printed on Thingiverse and post it later. I'm very pleased with the level of detail from the larger scale, as a final product. 6mm scale, well, the detail is good enough to serve as proxies until I get some better models (as in the plastic or pewter and resin kinds). In the mean time, I have some fun models to paint in odd ways, as well as some great beginner miniatures for my boys to paint. 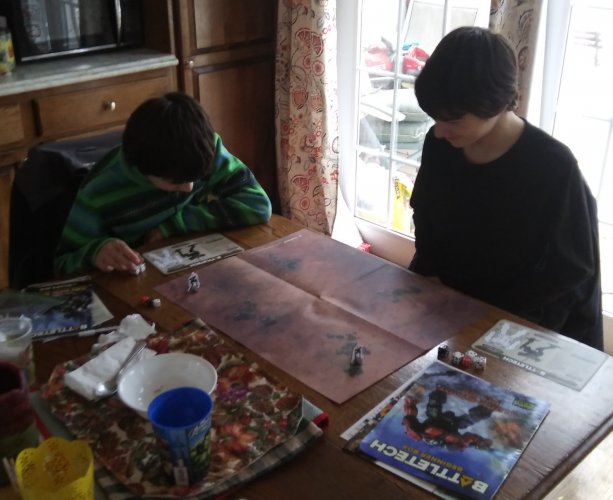 I's great to see that your sons are getting into the game. I played Battleteck way back in the 90's, but my love has always been D&D... Great work on the minis, and good luck.
Reactions: Sudsy

So, for my first paint ups of my 3D proxies... I decided to do something I'm unlikely to do with actual models. 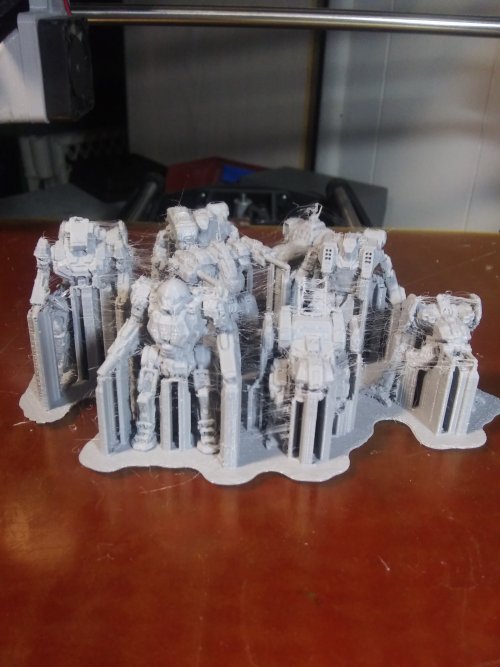 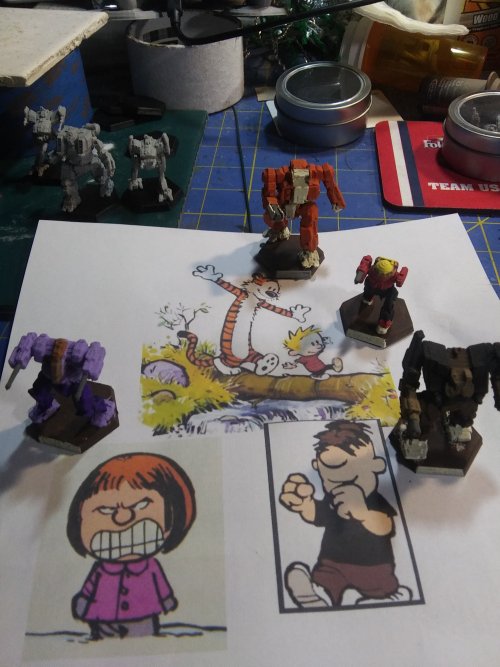 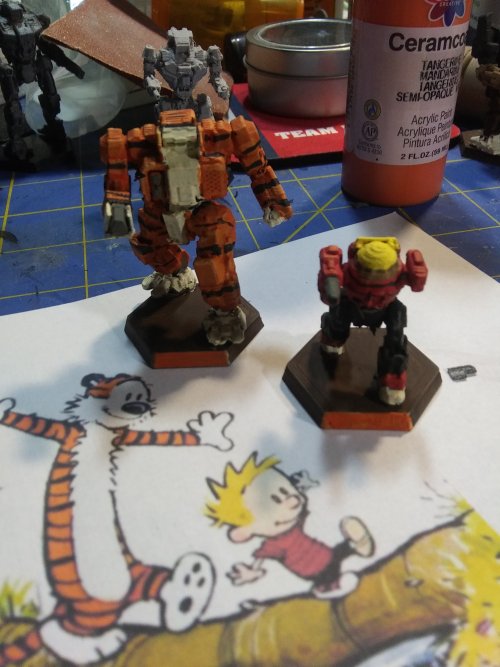 Here we go, a quick break down of each mech. 3D printed mech is between a CGL injected molded Griffin and a Stratos Minis resin "Bullshark" (counts as Maurader) 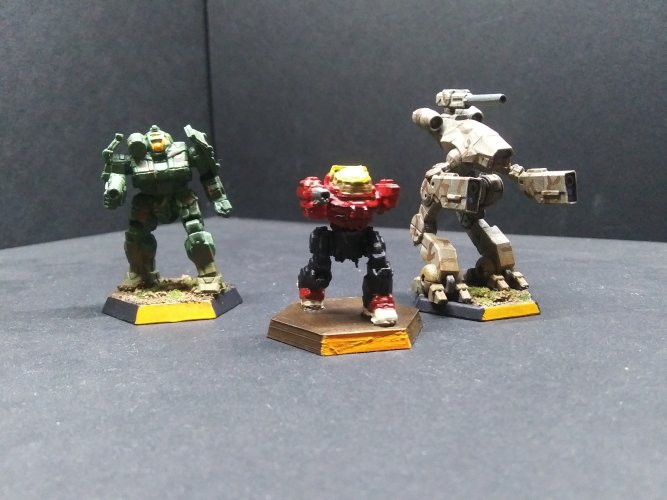 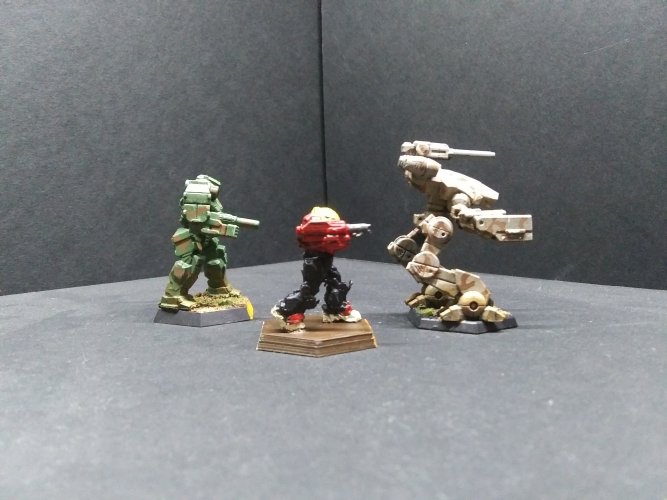 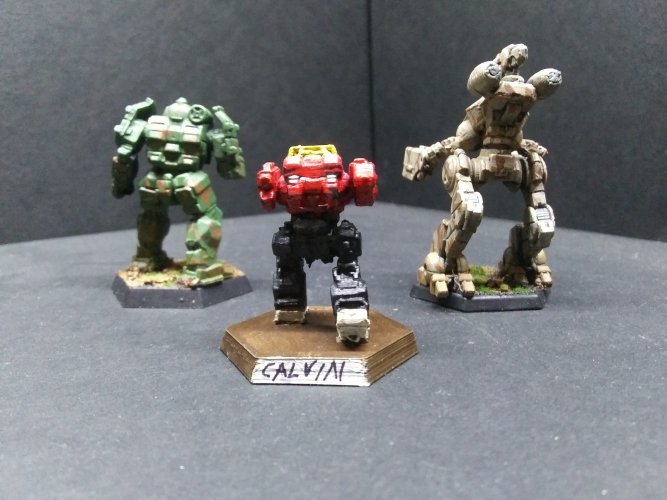 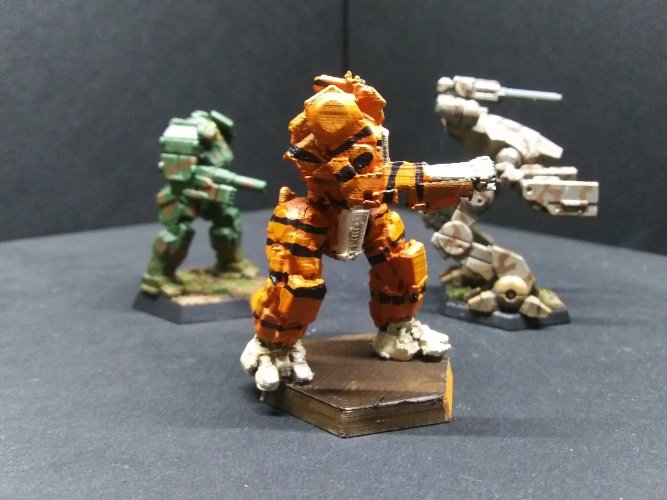 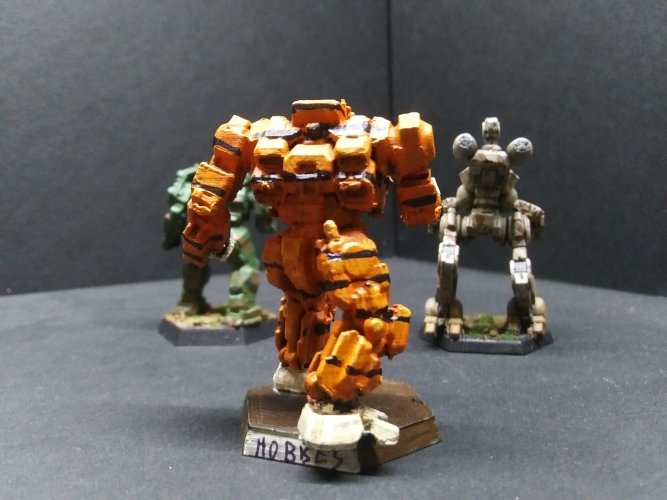 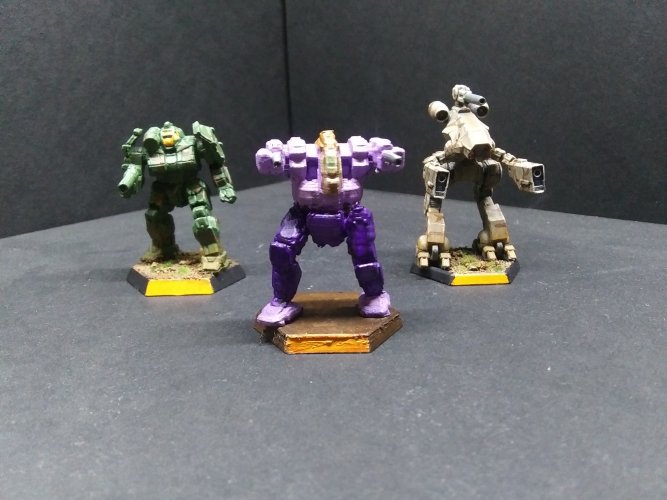 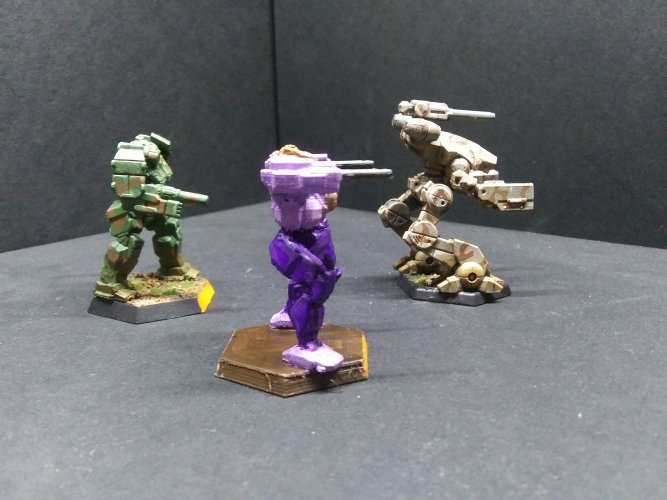 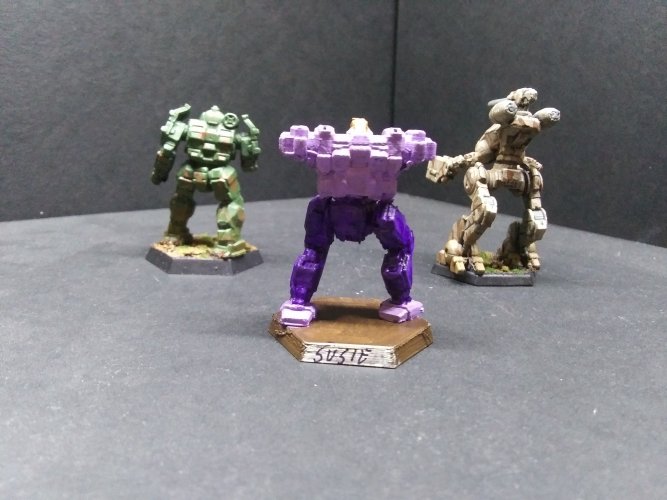 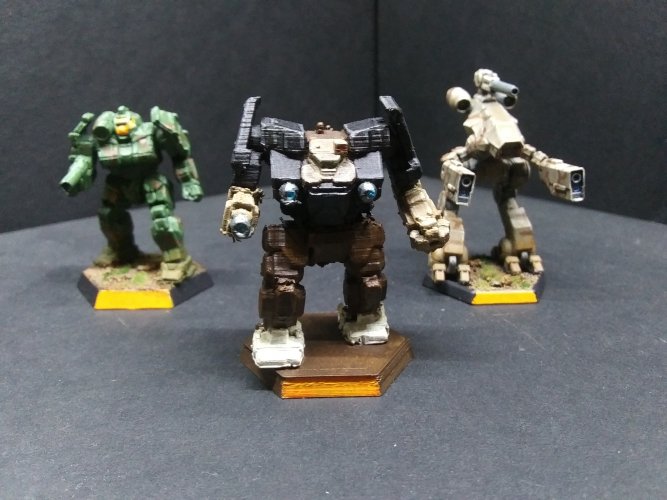 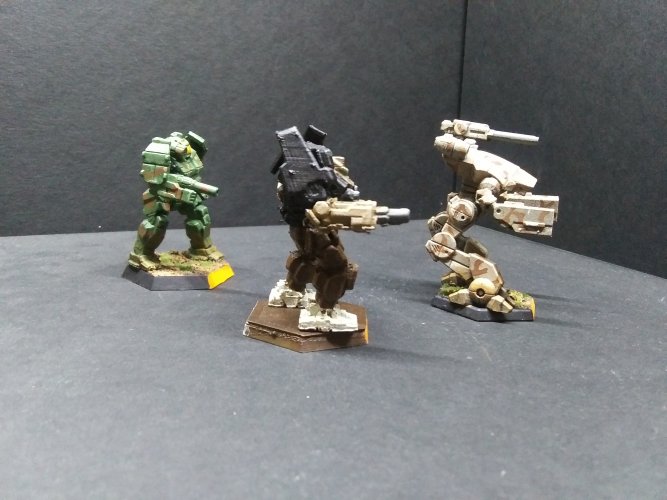 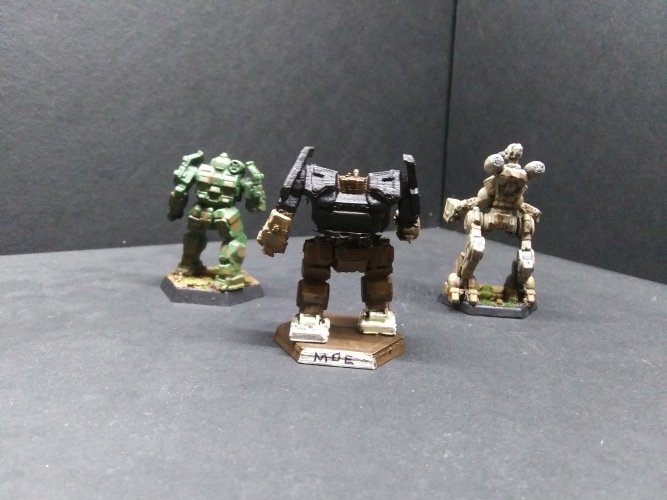 Sudsy!!! Nice printing and painting! Good work on these. Battletech is an awesome concept. I hope we get a good movie or TV series someday!