I have trolled the internet a couple of times, but St. Gummarus , St. Hubert, and St Gualbert were hiding.


They can now join St. Elgias I the patron saint of iron workers, whose establishment is in Montgomery Furnace.

I now have only one un named church, and it is a N scale church way up near a circular back drop that shrouds a ceiling pointed spot light, in a spot that is almost impossible to see.

kitbashing on page 38 of my main thread.

There has been no progress on the Churches recently, I have been working for mammon, trying to get commerce going by reworking my Southern Staging yard, where more than half of my interchange trafic originates.

I am making a note here, though, as I have some new kitbashing projects in the works on my main thread. I have been adding some ore bins to the Bumpass Coal and Iron Co. way up on the Narrow gauge, in Gegokayoosa NC. and I have started kitbashing a tannery for Harlow Tn.


here is the link. . . . . There is some scratchbuilding and kitbashing scattered elsewhere in that thread

Still no more work on the churches, but I am planning a major rebuild of my RR that might open up room for 3 or four more churches.

Ahh yes I remember that church, tis a beauty indeed. It's always great to see what you can make out of anything and make it yours. The greatest of modelers need this knack, otherwise scenes are boring when you can pick out what kit is what. That's just my two cents.

I have lots of buildings in mind I'd love to scratch and/or bash. One of them also being a church, the one from my hometown which I used to go to. Since I haven't seen anything close to it made this will probably be a scratch job, but as it always seems when I have something painted or make something, someone comes out with one (like my Fox River Valley SD24 that Atlas came out with a few years ago). 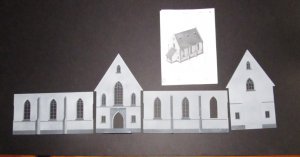 I am revisiting this thread after a long absence. I am rebuilding my main RR, see my thread over on the logging Minning and Industrial section, And Harlow is undergoing a massive transition. Harlow was at the end of the line, and due to it's tight curves, code 55 rail with spikes that were too large, and interfeared with the flangeways, and the nightmare 3 way stub switches, which I could get to work, but on one else could, Harlow did not get used much. the new Harlow is in the middle of my RR, so it will see a lot of trafic. it is mostly flat, and has 21 inch radius curves on the main, plenty enough for my tiny critters.

The biggest change is Harlow covers more than three times the space that old Harlow did, with a similar number of industrial spurs, and some big passing sidings, and code 100 track, where My RR will share the main with the Southern, and code 83 elsewhere.

Old harlow had no three story buildings and I have form five , four, and three story buildings in this new much larger Harlow; ( see kitbashing for city buildings in this section). St. Stevens's, kitbashed for the old Harlow, looked too small for the new larger Harlow, and has been moved to the new urban center of State Line Ga., on the 3rd level up. I considered scratchbuilding a church, but I'm in a hurry here. the only kit I found that had close to the right look was this Faller village church. it has a tower, not shown in this photo from the instructions. The church has stucko walls, which I did not like originally, but the texture is awesome, and spraypainting the walls flat black, and then auto primer gray, and finishing them with a dusting of white, while the gray was still wet, got an excellent look to the stucko texture.


The main thing s I don't like about the kit is the little rectangular anex anging off the wall behind where the altar goes. I will leave that off and scratchbuild a three or five sided bump out with arched windows, for the middle of that wall. Then also the kit has a tile roof, aproppriate for Europe, and parts of the states, but not Eastern TN in 1928, so I will have to rework the roof with shingles, or metal roofing. I am having a lot of fun with this. the European manufacturors pack a lot of detail into thier products. the stone trim on this model is exquiste, especially after being painted with flat black, and then dusted with the gray auto primer.


I am having a lot of fun tweaking this European church into a church that will look at home in Southeastern TN. more photos as I make more progress especially as I get to the new addition, that will be a focal point of the new harlow city scene.

Here is St. Steven's in it's new location in State Line Georgia. St. Steven's had a foundation in old harlow, that was not recoverable, so it will need to have a foundation and front steps built for it in this location. 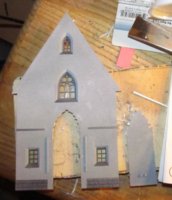 in this picture I have opened up the wall behind the altar with an opening with an arched roof. I did this in case I want to add an interior at a later date the inside will look right. 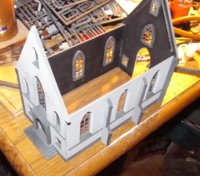 I did not have any scribed styrene to do the flloor so I used some of my red ceadar tie material to do the floor. it still needs some light sanding to smooth it out I have a end wall glued to each side wall, but the whole thing is not glued together, again in case I want to crack this thing open to do the interior. some times in these cases I'll glue the sub assembalies together with elmers so they will stay together, but can be easily and safely seperated if need be for interior detailing at a later date. 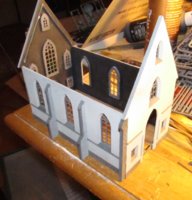 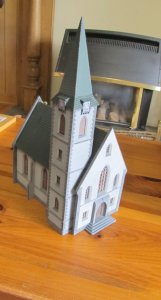 I have most of the major assembalies together for the church, missing just a few details lft to put on I decided against trying for interior detailing. the printed paper stained glass looked good so I used it; and scanned them for possible use on other projects.

I have the wall with the door, glued to the floor, and to the wall with the power. One section of the roof is glued to those walls. and the other two walls are glued together; even though I don't plan to do an interior, I do want to light it, to show off the stained glass. I will have to be able to get inthere for maintenance, so after I get the Led lighting installed, I will glue the two sub assembalies together with white glue, which should hold it together for light handling, and make it easy to seperate should I have to go in to replace electronics..

I am very impressed with this kit this was the only comercial kit I could find that was big enough, but no too big seing the pictures in the catalouge did not turn my switch; but my switch is turned now. the detail on this kit is awesome; and it is big! It will not be overwhealmed by the new Harlow, as St. Steven's was. the tower will reach up nearly to the upperlevel's benchwork, so the spire, ot the cross they provide for the tip of the steple may be pointlessly impossible to see.

the next photos will either be of LED insalations, or testfitting In Harlow. I left some decorative arched pannels off the louvers on the bell tower to give me material for the bay behind the alter, which with the arched cut out in the wall are the main kitbaseb elements to this project; a relatively minor change, but one that will make the structure look right to my eye. 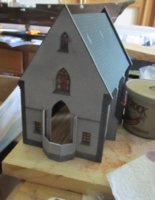 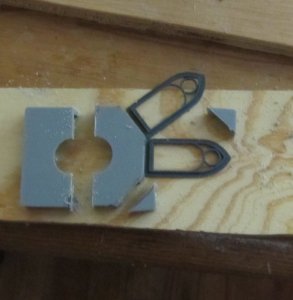 Here comes the kitbashing part. I have to be very careful with the stuco material, don't have much, anything I mess up will have to be done in stone 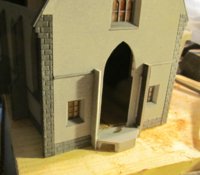 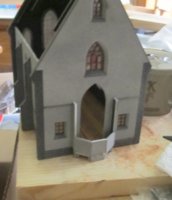 I got the kitbashed bay done for the wall behind the altar , I photographed the church next to the plans , so you can see the anex that I did not choose to build, so you could see what I did not think would fit, and what I thought would fit. 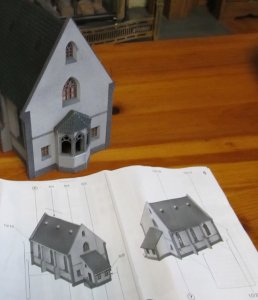 The next thing I need to do is to repaint the roof and details of the bay, and work on getting the lighting installed I'm going to put nine leds in the tower; three above each end wall, and six down each long wall. I scanned the stained glass from the kitchen . I printed the glass, and sealed the stained glass between sheets of packing tape, so the inkjet printing woin't smear when I glue them to the plastic glazing for the bay window. 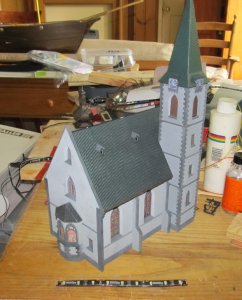 I have added some stone trim work to the bay, and the gutters and roof vents to the roof. the only things left are the Led lighting ( a strip in front of the church in the photos,) the tile for the ridge of the roof, and the downspouts. the downspouts look fragile, so I waill wait to put them on till the scenery is done near the church, and it won't have to be moved much, and by that time I will have lost the downspouts, and thus not be able to break them 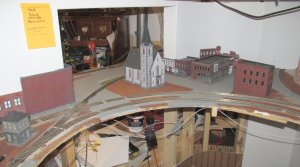 Here is St Cristopher's from the back side of the scenic divider in new Harlow. 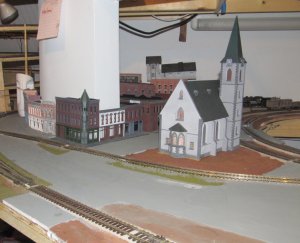 and the view from the front side of the scenic divider, which is open here to let the Southern Main loop back on itself to form a return loop.