Anyone know about cricut?

My brand new cricut exporer 2 only cuts squares. I swear I do everything it says, and it scans the borders and then cuts a square and shuts off.

I purchased a Cameo Silhouette (still have it) and I could never get it to work. Spent 4 weeks cussing that thing up and down. FInally, got the right person at Cameo, he had me run some tests then said, "it's defective", it was defective, they sent me a new one, which I had to pay for, and they would refund to my credit card. They told me to return everything and returned me a new printer without any of the accessories, like the cutting matt?. I called them up, demanded that they send me the whole printer, ot I would contest the sale on my Credit Card. Two days letter I got a package with all the accessories. I set it up, it worked. I have soured so much on it that it just sets in a box in the corner. I have no interest in messing with it, and the fact that it took 4 people to figure out they sold me a dud, which was what I kept saying, just turned me off to it. They were nice as all heck, just stupid.
Reactions: spaceagent-9

I just looked at there help space...and using the print to cut feature seems like all you do is set your image and press Make It? Not a lot of options as I can see...and that is exactly why I did not buy one. It doesn't appear to have the vector editor built in so you can't modify your cut file except by erasing parts you don't want and then it makes a filled outline, but can't tweak it...It is a very simple UI which is it's Pro and Con. The Cameo for example..is far more complicated...but there are far more options even to trace a raster image...(Though it takes a lot of time to do so..)
I grabbed a copy of Design Space and imported a set of inner wheels 20 of them...it choked on a set of textured circles...even though it was easy to delete the sections and make the cut sheet.... something more complicated will just kill the prog!

My honest opinion...send it back. You would be far better off with a Cameo, to do what you need in Card-Modeling... though I haven't checked the Prices!
Man! It will even cut sheet styrene and scribe images...
Reactions: spaceagent-9

Well, thanks to Ron Caudillo going over everything step by step, we got it solved!
It seems that the hobby video is not what we paper modelers want to follow.
The mistake I made was at the screen ready to import the image into the graph paper scaling canvas lookin' step, I needed to use a magic wand tool to erase the background.
Also windows, portholes, openings, etc... so we made a test cut and that fixed the blank square it was cutting out , to the individual parts as it could read them.
The really cool thing is that now for something like the Jupiter 2 from lost in space, I can make a silhouette on screen and then slip in some metallic faced paper and it will cut out the parts without printing the ink texture on them.
So it will be a real clean cut and sharp paper outside appearance.
I also plan to make those led light boxes now in black paper for the windows on his enlarge 1701!
I wont have to cut out the printed inked paper windows, just back it up with the stencil black paper pieces and make a light box like I originally wanted.
REAL PLEASED WITH IT!!!

The Cameo is like a CNC cuting machine. It does take a lot of time, and when it works, boy does it work. But for doing one off stuff, I find it takes too long. Sinc e I have a CAD program and can just take the outline and export it to the Cameo, it cuts time down by many many hours. If your going to push a cControl point around to make an outline like that, get a CAD program like Rhino, and start doing CAD, it's almost the same amount of effort. Get the Cameo though. They have shaped up quite a bit since I purchase d my machine. Maybe when I finished my house I'll start messing with it, but, well, anyways, gave my 2 cents worth, it is a great machine and that cardbide blade will cut very thin metal, which opens up a whole new world.
Reactions: spaceagent-9

Found out a few things, if you want a really straight edge, the piece must be orientated up and down not across the page, so the straight edge you want is cut top to bottom, not one sideof the page to the other side.
You will have to redraw the piece's borders so there are no leaks when filled. Even ports and windows will have to be re-bordered for a clean cut. Otherwise, the fill will bleed out into the entire page and you will have a mostly blank sheet where your pieces were.
Bag your cuts by piece, so you don't lose any pieces. Cut out any part that you would need to be defined, as the fill will cover all your parts uniformly with a black colored fill. The same will go if you use a print with details, anything you want cut out or given depth, you will have to redefine the borders.

also I found out that the settings keep changing, so it might be wise to reset all the settings every time you cut a page. 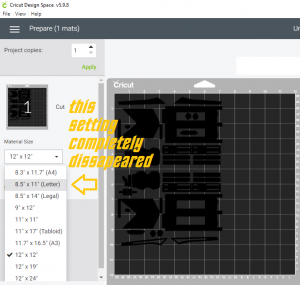 Glad you got it fingered out...I always hate to advise another machine when the one you have will do what you want, once you get things right...that one just won't do what I need it to do...and of course I send vector files directly from my 3d so I oftentimes bypass the Cameo program altogether...

I have a drawing pad that saves as a vector and its beautiful!!! free too. All I have to do is save something I want to enlarge and print it to see. Since my sister bought me the cricut I'm going to stick with it, hopefully i can get a 3D printer going. but this way I can practice and improve to a standard that's acceptable.
Reactions: Gandolf50
You must log in or register to reply here.
Share:
Facebook Twitter Reddit Pinterest Tumblr WhatsApp Email Link
Top Bottom