an insane variation on a Roman Warship

On this forum I mainly live in the model train section's logging minning and industrial section, bit I do do some things outside of that sub catagory, and I love wood, and have a loot of tools for working with. Years ago I was walking through a Hobbly Lobby, and saw an acadamy plastic model for a Roman Warship on sale. I bought it, and while studying it had the thought; "This is cool, but it's too small, so I used the plastic model as a guide, and built this creature. This was my first atempt at plank on frame modeling; is did not build the upswept stern, frankly because I had no idea how at that time, I got fancifull with the face and the tail.

this construction photo shows the construction details. It is built with yellow poplar, with a urathane based spar varnish finish, the dark wood is cut from the hearwood, and the lighter wood is cut from the sapwoodwood i, the deck is stained. I have a four inch tablesaw, an old Dremil saw that has been heavily modified. the planks are glued down with Leach F-26 glue, and nailed down with model RR spikes, which I nipped the sike heads off of. Trying to get the ram right was an issue, so I gave up and went full bore fantasy on it, some teeth are painted on, other teeth and the horns s are rurned from brass, shaped and soldered, and applied into holes drilled into the ram, and secured with epoxey

In this photo you can see the painted face before the teeth and horns, and without the removeable deck. the deck and the tower have a base of model aircraft plywood. the deck has yellow poplar planking on top, and the tower has stone "Blocks" made of stained balsa wood glued on to the plywood frame inside and out, so the plywood is completely covered and invisible 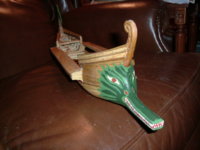 Some might ask, does it float. that was the plan. I built it for RC. just like me, I was way too ambitious, never having worked with RC before. I did build a mechanism to make the oars work, whith each bank powered by a sevo tith the stops cut out, so it would create a circular motion. my mechanism, and the other radio gear was too heavy though (or the model was too samll. I have been removing a lot of the excess structural wood inside the model to reduce weight, and hope to build a newer ,simpler, lighter mechanism, in hopes of terrorizing the local waterways with this little monster 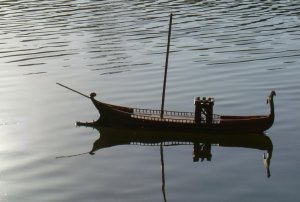 a link to a video, and another showubg the failed mechanism

This is truly a beautiful ship! And the fact that it floats gives the model a special extra. Very well done!

Thanks for your kind words. right now I have an awesome static model, which is so much less than I aimed for. when I built it I had a cheap ****py radio that was in the process of dying as I was testing ths animal. To start with, I had one channel working the rudders (sterring oars, actually, rudders had not been invented yet), one channel working the port oarbank , and another running the starboard oarbank, and the fourth could wag the fish tail.


I built this thing three times the size of the Acadamy Kit; had I built it four or five times the size of the acadamy kit, I'd have been much beter off, as the increased displacement would have supported more machernery, radio, and battery weight but hind sight is twenty twnenty. I have a newer digital radio with five channels, the reciever is much smaller and lighter. I have been using a dremil cutting bit to grind away at the eecessivly fat and wide ribs inside the hull. I am considering abandoning the idea of having sererate servos contoll each oar bank, and sycronising the oar banks. it would be very cool to be able to run one side forward, and the otherside backwards to turn in place; but I thought it would be relatively easy to keep the oars sycronised when going one direction, but it was near impossible.

I may rebuild it using one servo tith the stops cut away to power both oarbanks, and rely on the steering oars to steer. that would be less satisfying, but should I have two seperately powered oarbanks, I'd need a mechanism to lock them in sink; that woule require another servo, more complication for the mechanism, and more wieght, a possible souloution for a larger model, but not this one. with extra channels I could try to control the sail, but that might be best left to a larger model.

this is a beautiful model, I had just noit set out to make a static model, perhaps I will be able to resolcve some it's issues., and paly in water with it. one cool thing about this model is it draws about two inches, so it could play in a deep puddle.


I have built a hull that should be easier to make work, it is larger, based on a Civil War era sidewheel steamer, with a schooner rig. the mechanism will be easier, but again I don't know ***** about sailing. not as much info on the web about RC sailing as I had hoped, seems most of those guys race, and keep thier secrets close to the vest. ***** once again blundering into stuff I don't know squat about. at least when I'm working on my trains, I know just what I'm doing.
Last edited: Jun 9, 2014

Absolutely beautiful!! I am a t a loss of words. The construction of this boggles the mind............Hey, you holding back on us? Kudos to a work of art, the fact the you can put it on water, and play with it!! Well, you obviously are a master at whatever genre of model making you chose. A wonderful pleasure to watch. Thanks for the videos.

I too thought the same thing when I first read the title.

This is truly a work of FUNCTIONAL ART!!!
This would make for a GREAT teaching aid to show how these boats worked and moved through the water.
KUDOS TO YOU ON A FINE JOB WELL DONE!!!

D C! Where have you been!

Dealing with the world of metal challenges, wishing real cars were as fixable as paper!

That is would , assuming I could learn either more about building RC mechanisms. My wife bought a place on Kentucky lake; so I'm spending a lot of time on the waterfront. I have a partially built civil war era paddle wheel steamer I have the hull done on. I'm planning on scratchbuilding the paddles, and putting a mechanism together for that first , as I know how to make it work, be fore revisiting this project. if worse comes to worse, I could always build a larger hull. If I built twice this size, I could acomidate all kinds of weight.