I worked for many motorcycle dealerships, and always had a dealer bike. It was part of the pay package. I would put 5000 miles on a new bike, then it would be sold, with a warranty, at a really good price. I can't even remember how many bikes I have driven this way, but it covered many makes. Sometimes we would get Ducatis and other more exotic bikes, and I would grab those. I rode a 650 Ducati Pantah at 130 mph up the Taconic parkway, while my friend was on my GS750ES Suzuki. Two completely different types of bikes, both doing the same thing. The Ducati was forgiving, hard as Hell to make learn over, while my Suzuki anticipated your move, and you had better be right. I have driven that bike off the side of the tires, but always managed to get it back up, sometimes a hard kick to the ground, most of the times a slight rotation of the handlebars. Funny thing though, because I got to ride all those bikes, I still have the first bike I ever purchased, a 1975 CB400F (now a Yoshima 458 cc Cafe Racer0 and my 1983 GS750ES, which I still ride, and actually rod just 3 weeks ago. The Honda had 75,000 miles on it before I blueprinted, and set up the motor for racing, and my Suzuki has 40,000 miles on it, and runs like a fine watch.

The pic below is pretty much how my Honda looks now, similar fairing, except it is Red, and I have a single person seat on it. (it's "pickled" in my Barn, no recent pics), I was clocked @135 MPH on that bike, 6th gear, 14,500 r.p.m.'s, Kazio Yoshima made my carbs into smoothbores, and hand bent the pipes, then dyno-tuned the carbs to the exhaust, he had my cylinder head and worked on that too. In 1977, the overhead camshaft chain alone cost me $175.00 dollars!! The forged pistons, Radical Camshafts, the engine cost a fortune to make, but with everything off the bike, it only weighed around 350 lbs, and was a monster at 9000 to 14,000 rpms. Every biker I know whats to buy that bike from me. Stainless steel spokes, with Gold Anodized D.I.D. aluminum rims:

Pic of my Suzuki (not mine, same thing though)again, I have no idea where pics are of that bike. It's about 60 feet from me, under a tarp, if it was daytime, I'd take a pic. Too bad it's so cold and wet right now. I just took it out of the Barn around a month ago when it warmed up, I have the same fairing on mine. They sold them for only 1 year and are impossible to find. That wind screeen, when last available from Suzuki (no longer is) was $650 dollars, what a rip-off!!:


First bike with a 16" inch fron wheel, anti-dive front forks, and a Full floating mono-shock rear suspension. It doesn't weigh that much more than my Honda!!

Lot of bikes under your hands, you must have lot of experiences. I was never much fun of sportbikes in general (visualy), but your Honda is beauty

The Honda is very rare, especially modified by the guy who designed the bike for Honda. The Suzuki I own (above) is the best all around motorcycle I have ever owned. It's broad power range allows for minimal shifting. It's synchromesh transmission does not need the clutch to up shift, just let off the power and shift. You can do the same for downshifting, though I don't, as I would not want to bed any shift forks.
Reactions: bigpetr

You certainly know your bikes.

I wet for a 300 mile ride this weekend. I'm sore as Hell. Getting older sucks!

I hear you. But i guess we just have to keep ourselves active often

Best Motorcycles I ever owned was my 1982 V45 Magna (1st Gen with the Chrome headlight and fenders) the my 1985 Honda Nighthawk CB750SC.. I really miss those 2 bikes..

I liked the CB750SC NightHawk a lot, that was a nice bike, and you still see a lot of them around. The Magna, both sizes, hand to have the engine dropped to replace the valve shins, as it was a valve shim motor, consequently, most people did not do it and ruined the engines. I only by bikes with Cam followers. My bike has 4 valves per cylinder, and I only need look at the every 3,500 miles, or if there is a performance drop off. They have never been tight, which means the valves aren't receding, a good thing!! The V65 was quite the beast, but even harder to get at the valves to adjust. That's why, along with the 750 Interceptor, considering how many were sold, you don't see any around here. I haven't seen any of those bikes for many years. I didn't get the Intercepter as it weight over 50 lbs. more than my bike and did not handle as well, didn't like that Honda engine either. My brother in law has a V4 800 cc shaft drive, it handles like it has an 18 lb. bowling ball hanging off of each handle bar. He has a stable of bikes, his CX650 V-twin Turbo is awesome, but those weren't good years for Honda. I'd like to find a GS1150 Suzuki to redo. They come up relatively inexpensive because of a wiring defect, which most people, and few dealers know how to fix. It takes me about two hours to replace and repair the harness section (you cut it out of the loop), use a Kawasaki KZ1400 Voltage Regulator, get a new Stator from a company in California (Electrosports). Suzuki did not regulate two legs of the stator and the voltages ran wild, causing the harness to melt, short out, and take out the stator, then take out the voltage regulator. Poor slobs would buy the same stock parts and repeat the problem all over again!

Unfortunately, most the bikes for the last 2 decades are either crotch-rockets, or Harley styled.. No ingenuity in styling anymore in my opinion. I did notice that the 2016 Yamaha SR-400 harkens back to the days of the bridgestone which was my very first bike ( SS-7).

It looks a lot like the 1979 SR 500 single!! They don't even give you Alloy rims, or a seat strap for the passenger? It was under powered at 500 cc's, but could sure go through a turn. A very narrow bike, after 10 minutes, you had to look at your hands to make sure they were still there, they got so numb from vibration, and I knew guys who bored them to 650 cc's!! I bet it's virtually the same bike. They were kind of bullet proof, made great "Bobbers", and the decompression lever made them a bit easier to kick start. I have no love for the Modern Japanese "Street Killer' look, but Suzuki has managed to keep their SV line of bikes acceptable. The 1250 Bandit, with a person on it, looks actually pretty conventional, for a rocket with wheels. 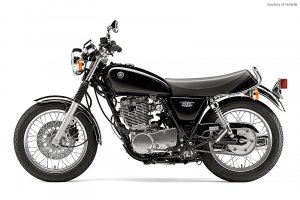 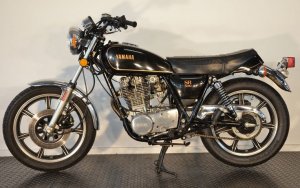 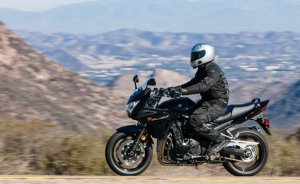